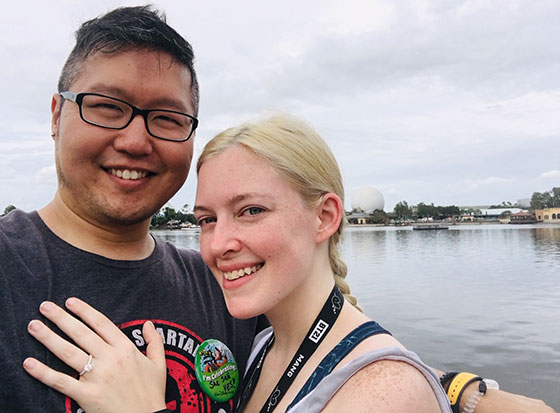 On this day, I no longer have a girlfriend.

I have a fiancée now.

Marriage is one of those things that I always imagined would be in my future.  Even though jaded people like to claim that it’s an archaic institution or something that doesn’t really mean much these days, the eternal romantic in me always saw it as something that I figured I’d want to attain in my life.  I’ve watched couples that I’ve always thought were great, mothers and fathers of children, and even my own parents dissolve and divorce which I’d be lying didn’t give me concerns for pursuing it myself, but it just seems like one of those things that always had a place in my life, personally.

And fortunately, I’ve had an accommodating partner throughout this journey towards marriage, and the once-mythical gf has stuck with me throughout the last four years, and kind of made it something of a no-brainer that we just might work out in the long haul.  I’m lucky to have a girl in my life that loves and accepts me, is supportive of my pursuits, and encourages me to be the best person that I can be, and I’m pretty stoked and excited to go through the awkward transition of calling her “my girl-I mean fiancée,” and eventually, my wife.

It’s funny because despite the fact that it took four years to get to this point, this is something that has been on my mind for a way lot longer.  But I didn’t want to be one of those people who were just giddy to be in a relationship, and rush straight into marriage, without really knowing their better halves, and despite the fact that I was wondering if this could go in this direction, I always erred on the side of steady, to let things grow, feel things out, and really be more and more sure of, well everything.

Alternatively, I didn’t want to become one of those couples that are together for so long, that marriage becomes something eventual and a formality, with there being no chance for much further growth.  I mean no disrespect for those who might fall into this category, but I want there to be a little bit more time for my future wife and I to grow together as a unit, and not as two separate individuals who happen to be living together or something unofficial.

Despite the fact that I wasn’t at all nervous going into my less-than-elaborate plan to get engaged, I still feel like a tremendous weight had been lifted off of my shoulders after I popped the question and she said yes.  The topic of marriage is now something that doesn’t have to be hidden or avoided, for fear of subtly pressuring the other, and with it out in the open and all cards on the table, it’s kind of refreshing to be able to speak freely about “when we’re married,” and actually verbalize words like wife and husband and marriage, etc, without them being trigger words for why nothing had happened over the last few years.

Anyway, the engagement doesn’t happen so great without the few close friends and family that I collaborated with well in advance.  Much to the horror of mythical fiancée, I’ve actually been holding onto the ring for the last four months; naturally purchased while she was out of the country, as not to draw any possibility of suspicion while I was doing it.  That’s how much I respect her sharpness, that I have to wait until she’s on the other side of the planet, before I can start preparing for engagement.

Ultimately, the question was popped at Epcot, near the Italy portion of the park.  Epcot was really the only appropriate place for this to have occurred, because aside from the fact that I asked her out at Disney World four years ago, much of our relationship has revolved around Disney trips, especially the annual trips to the Food and Wine Festival.

And despite the fact that I bumbled through the actual presentation of the ring and put it on the wrong hand, she didn’t flinch or hesitate for a single second to say yes.

This is why I’m lucky, and why I’m excited that she’s going to marry me and be my wife.