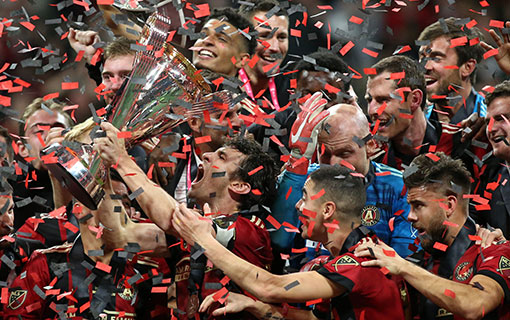 No, serious question.  Don’t get wrong, I like soccer and I can sit down and watch a match and understand what’s going on, but the truth of the matter is that soccer doesn’t get a fraction of the respect and acknowledgement of The Big 3 sports (MLB, NFL, NBA) when it comes to general recognition, at least in America.  I feel like hockey and the NHL took a serious ding from their last strike and lockout, and they’ve fallen to a second-tier of prevalence where it only matters to the people whose teams are actually in contention, but it’s really difficult for those outside of those fandoms to actually care.

And that’s where I get the impression that MLS is at, in spite of the fact that Atlanta United just won the top prize in the organization, the MLS Cup.  Personally, I don’t know how many teams there are in MLS.  I don’t even definitively know how many teams are in New York.  Obviously, I know Atlanta’s got a team, and I know for a fact that there are teams in Toronto, Seattle, Portland, Orlando, Los Angeles, and I think there’s one in Kansas City.  Otherwise, I don’t know much else about MLS as a whole, and I indulge in a lot of sports, be it on television or partaking in sports news on the internet.

That being said it brings me back to my original question, does Atlanta United winning the MLS Cup actually break the Curse of Atlanta Sports, the superstitious mythos behind the sheer inability of Atlanta sports teams to win any championships?

When sports media started coining the discussions about “cursed cities,” it almost always started with Cleveland, since for the longest time, the Browns sucked at football, the Indians sucked at baseball, and the Cavaliers sucked at basketball.  An NHL team lasted there for two seasons, a WNBA team for just six, and they’ve never had an MLS club.  Needless to say, they were undoubtedly the worst luck sports city in America, until LeBron James gave the city a second shot and basically willed the franchise to an NBA championship in 2016.

But ever since the debate of cursed cities came into existence, it really wasn’t hidden that curses and droughts really referred to championships in The Big 3; this was never made more prevalent than when the Seattle Seahawks won the Super Bowl in 2014, and for the ensuing weeks, there were all sorts of statements flung around about the first major sporting championship brought to Seattle in history, completely ignoring the fact that the Seattle Storm had won two WNBA titles prior to this.  The Kansas City Royals’ World Series win ended the drought in 2015, despite the fact that Sporting KC won the MLS Cup in 2013.  And Washington D.C. often ignored that D.C. United won four MLS Cups before the Capitals “broke the curse” with a Stanley Cup win just this year.

And the last two instances are prime examples of just how ignored MLS is in the grand spectrum of professional sport organizations, and why I pose the question on whether or not Atlanta United’s MLS Cup win actually breaks the Curse of Atlanta Sports.

This is a non-issue if the Falcons didn’t choke the mother of choke jobs in the Super Bowl in 2017, because then the curse would already have been lifted.  Atlantans have long stopped relying on the Braves to win a World Series, because they haven’t gotten out of the first round (or wild card) in the last eight times they’ve made the playoffs.  And the Hawks haven’t been relevant since Dominque Wilkins, or Dikembe Mutombo if you’re feeling generous, and it’s a safe bet to make that most of us reading this will probably die before the Hawks hoist an NBA Championship.

Frankly, I understand the locals here who want to declare the curse lifted from an MLS Cup, and I don’t want to piss on anyone’s parade by pointing out this inequity of championship values by actually having this in real face-to-face conversation, but this is why brogs exist in the first place, for individuals to share their thoughts without having to directly converse with another human being and consider their feelings.  Fans should absolutely be happy, because especially in Atlanta, seeing victories aren’t things that we’re necessarily used to.

But the die-hard hard-ass sports fan traditionalist in me remains a little skeptical, a little dubious, and even a little bit annoyed at the celebration of it.  If there’s one thing I’ve always been hyper-critical of, is the notion of bandwagon sports fans, and if there were ever time for fairweather fans to flock towards something, it’s immediately after winning a championship.  Already, the morning after, I’m seeing a lot of the Royal We being flung around, as if Atlantans had waited some great plight for an MLS Cup; it’s been two years since they came into actual existence, and the first year felt the same fate as all Atlanta sports before them: an early playoff exit.

I digress, however.  There’s still another part of me that is happy to see Atlanta get a victory in some fashion, finally, and like I said, I actually do like soccer.  Sure, I know that MLS is still a ways behind futbol in other countries, but it’s still fun to watch a form of the game that’s a little less refined, a little more raw and just a little less predictable than it is everywhere else on the planet.

But if you were to ask me if I thought the Curse of Atlanta Sports were lifted, I’d have to give a reluctant yes.  Disagreeing would be disrespectful to sports outside of the Big 3, which is very much not the case how I feel, and if they ever want to achieve the status that of a Big 3 sport, they need all the respect they can get.

Besides, maybe if the Braves and Falcons stop feeling like the pressure of the curse is on their shoulders, they’ll stop sucking in the post-season and actually accomplish something.