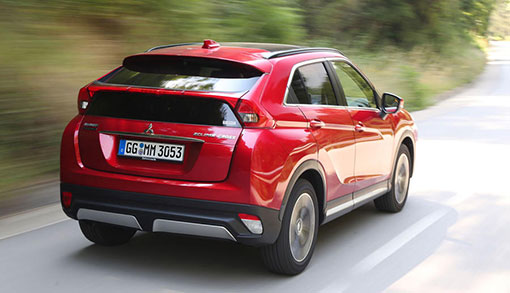 I’m not sure what I’d been looking at on the internet for Facebook to decide that it was a good idea to advertise Mitsubishis to me, but considering it’s given me something to write about, I can’t be too agitated in the end.  But despite the fact that it’s been available for the entire year thus far, I’d apparently been completely unaware that this car even existed, much less the fact that it was the vehicle that Mitsubishi decided to bestow the once-prized name of Eclipse.

Seeing this, I can’t help but wonder what the hell Mitsubishi is thinking these days; frankly, I’m often curious how they even survive in the automotive industry considering just how obscure they’ve become over the last few decades.  I can’t even name any models outside of the Lancer Evolution, but I want to say that that car’s been retired now as well.  Does the Gallant even exist anymore?  The Diamante?  And North America never got the FTO, and the 3000GT has been gone for ages now.

But bringing back the Eclipse name?  And then putting it onto a baby-SUV that for whatever reason have all been rechristened as crossovers?  I do not understand the logic.  Does not compute.

The Eclipse was a name synonymous with sports cars throughout the 90s and even into the 2000s; I was a big fan of the first generation, which also shared production with Plymouth and Eagle, who released the Laser and Talon respectively, but all came available with a beastly top-end model that was equipped with the legendary 4G63 turbo-charged motor, and was all-wheel drive.

The second generation, Mitsubishi really outdid themselves, creating one of the most popular sports cars of the 90s, with a very tuner-friendly Eclipse that looked like a baby-Supra, but was like half the cost, that also came available in a GSX top-end that had the same turbo engine plus all-wheel drive; almost like it was a sleeker looking Evo, years before the Evo really exploded in popularity.

The third generation was where the Eclipse really began to go downhill, and basically turned the car into this heavy, clunky boat of a car that really started to distance itself away from the typical ideals of Japanese performance cars.  Gone were turbo-charged engines and all-wheel drive, and it was replaced with a vanilla-plain V6 engine, all while looking like one of the types of shark that isn’t aggressive or dangerous to humans.

By the time the fourth generation came around, it was already kind of too late; Mitsubishi was pretty mediocre and in the middle of the pack as far as car manufacturers were concerned; not even the Evo could really keep the company relevant, because the Subaru Impreza was far more successful at this point (unsubstantiated).  But it was bubbly, overly round, and seemed closer to a Homer Simpson type of car than anything remotely worthy of being called an Eclipse.  I never bothered to find out anything in regards to its performance, engines or drivetrain.

Mercifully, Mitsubishi decided to shelf the Eclipse name, effectively killing it and preventing the company from further dancing on its grave.  It was an appropriate and fitting way for the Eclipse to go, letting it die before anyone could further tarnish the name.

Unfortunately, that’s pretty typical to how the car industry works, where a name is put on the shelf, usually for 8-10 years, so that it can be resurrected in the future, and try to sell cars solely on the name value alone.  Typically though, most manufacturers will re-release the model name, under a similar car as its predecessors; like the HRX was built to pay homage to the CRX, and Chevy clearly understood the only way the Camaro name would sell cars if it were a muscle car, like all the Camaros before it.

And it’s not like there wasn’t examples of failure before Mitsubishi, like when Ford revived the Taurus name, but made it into a crossover vehicle, before realizing that they’ve alienated all die-hard Ford loyalists, and eventually hot-fixed themselves, by killing the Five Hundred and re-christening it as the Taurus.

Clearly, Mitsubishi didn’t get the memo, and despite the fact that all Eclipses in the past were performance-driven sporty coupes, the new Eclipse Cross is an SUV that looks more like Walter White’s Pontiac Aztek from Breaking Bad than it does the lightning-fast coupe that was prominently featured in the very first The Fast and the Furious film.

Again, I’m not sure what Mitsubishi’s strategy was on this call, but I’m going to assume that they had the idea that they could try and tap into the market of people who had/wanted Eclipses when they were teenagers, and are hoping that releasing something called Eclipse will reignite the want for the car to the now very-much adult car buyers of today.  Except they don’t seem to realize that adults who might want an Eclipse now, will be expecting to see a sporty coupe, that might have turbo and all-wheel drive.

Considering Mitsubishi is one of those conglomerates that makes shit like TVs and rice cookers on top of their automotive department, I have to think that they’re creative teams and strategists might be stretched a little bit thin and are kind of missing the point here.  They should probably be taking their strategy cues from Mazda that seems to get the point that cars shouldn’t deviate too far from the originals, and they just might remain successful.

Either way, it’s really sad and tragic that Mitsubishi decided to resurrect the Eclipse name, and then somehow manage devolve even further than they did when they released the 3rd and 4th generations of the car.  And at the same time, do it worse than any manufacturer before them, by completely changing the type of vehicle outright, from its origins; coupe, coupe, crossover.  That’s basically like Nintendo being game console, game console, microwave.

Regardless, I think the results must be speaking for themselves, because despite the fact that the car has been available throughout all of 2018, I haven’t seen a single one on the road.  Ever.  I didn’t even know it existed until I saw it on a cookie-generated Facebook ad, and I was thinking that it was coming in 2019.  But it’s still a tragedy to see what Mitsubishi has done to a once-proud name.  Shit man, I can’t even think of a single Mitsubishi dealership anywhere around me, which is probably why I never bothered to test one the last time I was looking at cars, and it’s a safe bet that I won’t be looking to them the next time I will be.