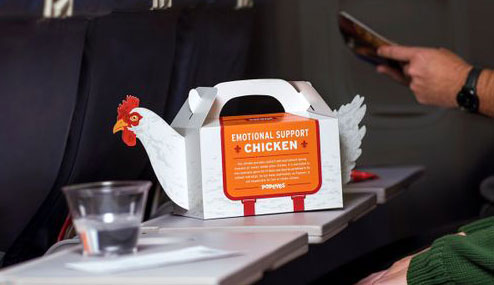 Just when you think Popeyes is onto something potentially legendary with their unveiling of Emotional Support Chicken, they have to shoot themselves on the foot and only make it available in a shithole like Philadelphia.  And not just the city itself, but instead the fucking airport, which is already, much like the rest of the city it’s in, one of the biggest blights within the country.

However in spite of my general ambivalence for Philly, I still have to tip my cap to Popeyes for such a hilarious and creative idea, that just tickles my fancy and makes me green with envy that it’s not available everywhere else, or at least Atlanta, so I could get my hands on a box of emotional support chicken as well.

I fly enough to have plenty of aggravation at the current state of the world, where the concept of emotional support animals even exists.  The airline industry has morphed into this hideous symbiotic orgy where the carriers have carte blanche to fuck customers left and right with price gauging, shrinking seats, antiquated boarding procedures and a myriad of things that makes flying amongst the worst occasionally necessary experiences there is, but because there’s an endless demand for travel, passengers are now allowed to get away with shit like emotional support animals, which is basically a bastardized ruse for people to be allowed to fly with their pets.

And frankly, as with most nice things in the world, selfish shitheads ruin and abuse the small pleasures by lying their asses off and proclaiming every Tom, Dick and Harry dog and cat as emotional support animals, or even more offensive, service pets.  There’s no secret that just about anyone can buy on eBay or just make their own service vests for their pets to futilely deceive the world around them that they’re more important than the average pet, and they most certainly capitalize on such inefficient enforcement, by trotting their very-much-not service animals into airports and acting surprised when they defecate in public or on the plane or bite people or attack other fake-ass service animals.

But because the world today sucks, nobody’s really allowed to call out any of these fake fucks, because everyone’s afraid of the one person that actually is legally and medically cleared to have a service animal and their service animal is actually a service animal, and then getting sued, or worse, made viral, because any scene will inevitably be caught by someone’s phone and then put on YouTube.  So despite the fact that there are hundreds of miserable lying fucks, nobody can really stop them.

But passively-aggressively ridiculing them?  That’s still fair game.  And when a notable company like Popeyes does it, it makes me nod in respect and admiration.  And makes me want to support their passive-aggressive commentary with chicken of solidarity, if I can’t get myself some emotional support chicken.

Words can’t properly express how much I love this.  I feel like anyone who gets a box of emotional support chicken is usually just a hungry passenger who probably doesn’t give two shits about the symbolism of it, but then there’s always the chance that some people might be hungry passengers and people like me who hate all the fake emotional support animal fuckheads, who want to get these boxes, and carry them around publicly and visibly, with hopes that the assholes with fake service animals all see it, and know that these exist because of them.  And because the shitheads who are the types to have fake emotional support animals in the first place are probably mentally resilient as wet tissue, it will undoubtedly trigger them and ruin their days.

I just wish that I could get my hands on one of these boxes.  Although I would prefer to get one full of freshly fried chicken, fries and a butter biscuit, I’d be completely okay if I could just get my hands on a box, because it’s a great example of great creative, and I’d love to get one because I love and respect it.