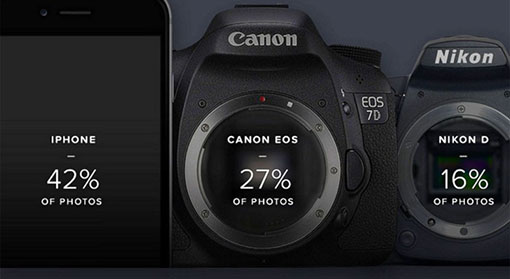 There’s a defiant change-resisting part of me that wants to erupt in a knee-jerk reaction and proclaim that cell phone cameras may saturate the world of photography now, but they’ll never compete with the quality of a traditional camera!  Honestly though, I don’t really feel like I can however.

Not only have cell phone cameras really closed the gap in capabilities of even the most bulky and expensive DSLR cameras out there, I also fall into the demographic that’s kind of tired of lugging around a brick with a heavy lens that’s cost me nearly $2 grand and is fragile as shit.  At the time I’m writing this, I have an embarrassingly large backlog of photos that I haven’t processed because they’re RAWs, and I typically do them one at a time, but the thing is I don’t have as much free time anymore as I used to, and I’ve got over half of my last European vacation photos to go through, as well as starting the photographs I took at Dragon*Con many months ago.

I don’t regret investing in a decent camera and investing even more in a bunch of expensive lenses; among the thousands of photos I’ve taken over the last decade, I’m sure I’ve got at least a handful of good ones that made it all worth it.  But the fact of the matter is that looking towards the future, I know that I’ve gotten more and more tired of lugging around “gear,” all for the sake of accomplishing what the modern cell phone is getting closer and closer to accomplishing.  Even during my last day in Germany a few months ago, one of the most liberating things was the fact that I had decided to not bring my camera with me, and to just go out and enjoy Munich without it.

Although I’m often behind the times when it comes to cell phones, mostly because I still don’t really consider my mobile device as my primary camera, and I don’t feel like keeping up with the Joneses and constantly updating and upgrading to the newest and latest and greatest phones because I want a better camera, I really do understand the general appeal of mobile device photography.  It’s literally going from your pocket to your hand, and you’re getting amazingly decent results from a few taps onto the screen.  There’s no wheels to turn, F-stops to adjust, no white to balance.  In the matter of seconds, a competent photo could be taken, as opposed to the vastly longer time it takes to configure a camera for the same result.

Even the art of bokeh AKA tastefully blurred background or foreground, which has taken me tons of practice to barely be better than a novice at, has gotten to a point where a mobile device can basically identify what’s the background, and tastefully blur it, with merely a sliding bar.  Frankly, considering bokeh’d photography is what’s widely perceived as the most popular when it comes to portraits and capturing human beings, there’s little reason why people wouldn’t just do the easy mode on a phone instead of shooting and inevitably re-shooting when you don’t get it right the first time around, like me.

Ultimately, it’s more of a sad business story for Canon, as well as Nikon and other manufacturers, as far as sales go.  I’ve had a lot of enjoyment out of photography as a casual hobby, but I’m not going to lie, there are times when I simply don’t want to have to lug around my camera sometimes, but I would still like to have the capability of taking good photos when I want to.  Pivoting to try and appeal solely to different demographics will only buy them a little bit of time; as the cell phone continues to evolve and grow, it’ll only be a matter of time before mobile cameras basically become the norm.

For what it’s worth, I still don’t plan on giving up on more traditional photography; I’m not saying I’m going to go all the way back in time and do film photography, but I most definitely want to be able to still use my DSLR.  When the day is over, as much as I may have bitched about it previously, the versatility of RAW is still the one thing that actual cameras will have over mobile photography, mostly shooting JPEGs by default.  Who knows, maybe as mobile photography continues to grow, it’ll force companies like Canon to actually drop some prices to some of their gear; lord knows, I don’t really want to drop another grand on another lens that I’m only going to use part of the time, or have to carry in tandem with other lenses, depending on the scenario.

But it’s still sad to hear that some of the most major players in the entire photography industry have basically shown their hand and basically admit that they’ve got white flags ready for whenever the time comes when they’re nearing death.  People like me most certainly can’t be helping, but it can’t be helped; sometimes people like me just want convenience and to not have to carry, things, sometimes, and with the growing trend of minimalism and scaling back, it can only mean bad things for the “traditional” camera industry.