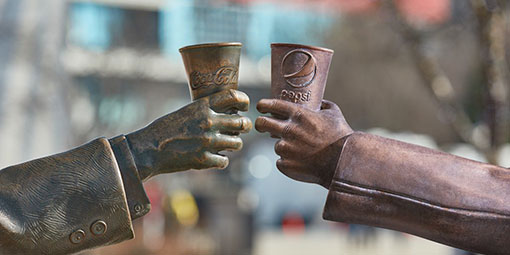 I get the whole “there’s no such thing as bad publicity” adage, and to a degree it’s not wrong.  But one of the more modern trends of today that I think is often times stupid and ultimately pointless, is the ideas of brands using social media to communicate amongst each other as if they were sentient individuals.  Sure, it can be amusing for two seconds to see McDonald’s take swipes at Burger King, Burger King take swipes at Taco Bell and Wendy’s taking swipes at everyone, but when the day is over, it’s still a person behind a keyboard roleplaying as an entire company, trying to get personal with another person roleplaying as another company behind another keyboard somewhere out there.

I accept that this is the world we live in now, but it doesn’t necessarily mean that I have to agree or care about the shenanigans that are necessary in order to justify everything as “advertising.”

In all fairness, there are plenty of examples out there of brands doing good on social media, that are admirable and creative means of utilizing the medium.  However, there are plenty of others, like Pepsi shoe-horning themselves into a lame attempt at a narrative with Coke, while they’re in Atlanta, as the official soft drink sponsor of Super Bowl Leee.

In no world would Coke ever bother trying to do this shit if they ever found themselves in whatever place happens to be the alleged home of Pepsi; they’re so irrelevant that people like me have no idea where that even might be.  They know they’re the top dog globally when it comes to the soda industry, regardless of what the numbers in America might be, Pepsi can’t touch Coke when it comes to the rest of the world as a whole.  And because Coke is the king of the mountain, they know they don’t have to resort to cheese and social media faux-viral fluff in order to get their name out there, because they’re simply in a position to where their name is practically engrained on the lips of everyone on the planet already, as the default software brand everywhere.

When it comes to tactics, Pepsi has evidently resorted to stealth and drive-bys in order to deploy their lame statue for a painfully forced narrative that a truce could possibly exist between the rivals; and I use that phrase loosely since Pepsi is so far beneath Coke, they could hardly be called rivals, but for simply lack of a better term.  There’s no way Coke would even bother doing something like this if the situation were reversed.

The bottom line is that I don’t know why this has triggered me to write at all, because I’m having a hard time formulating words other than “there’s no way Coke would bother with Pepsi if the roles were reversed,” and when the day is over, I don’t really drink much soda anyways.  I’m apt to drink Diet Pepsi in places where I can’t get a Diet Coke and ultimately I don’t care that much.  I guess my beef is with social media in general, and the fact that it Twitter was used as the virtual battlefield for sissies to slap fight, and it just kind of makes me roll my eyes that this is the world we’re living in these days that this isn’t just the norm, but is considered acceptable entertainment.