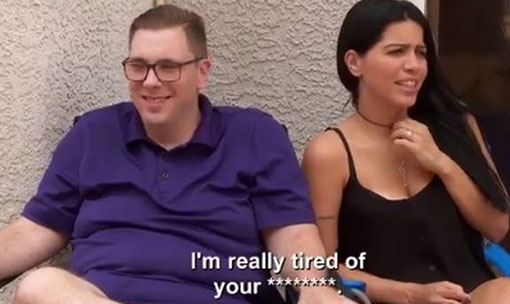 I knew 2019 was off to a great start when we discovered that the TLC Go app had opened their doors to our cable provider, thus allowing us to access to watch TLC programming, completely on demand.  That being said, I don’t often have to worry about not having something to watch at any given point with the vast majority of TLC’s library now available to me with the push of a few buttons.

Obviously, shows like My 600 Lb. Life are among the marquee shows that I favor the most, and classics like Extreme Cheapskates and Extreme Couponing inexplicably didn’t get renewed for anything beyond two seasons.  But if I had to pick one show that stood out above all others as my go-to for TLC programming, it is and has always been, 90 Day Fiancé.

I’m not ashamed to say it, but I’ve literally watched every season of 9DF.  The irony is that I’ve really liked a lot of shows in my time, but eventually everything falls to the wayside for whatever reason(s).  Archer, The Walking Dead, and American Horror Story come to mind as shows that I’ve at times gotten lukewarm with and allowed them to slide over to the back burner.  But not 9DF.  Nah dog, I’ve literally seen every single episode (of at least the core series), and I’m fairly certain I can name every single person who’s been on the show if shown a picture.

So I just recently finished season 6, and I was thinking that I was playing some major catchup; little did I realize that I basically caught up to season’s actual air dates, and probably wrapped up the main episodes right as the season was winding down with its typical tell-all episodes at the end.

Needless to say, there have been some real trainwrecks throughout the series, but I think season 6 really outdid themselves at finding some truly tv-worthy couples this time around.  I mean, every previous season always had one kind of anchor couple, or layup couple, as in the one couple that anyone could tell was the stable one, vanilla one, bland one, or rather the couple that everyone knew was going to be fine, even after the cameras stopped rolling.  Usually, they were the one where one or both of the couple were religious, and it was pulling teeth trying to get any sort of drama or entertainment value out of them.

But season 6?  Even the Mormon couple had some fire to them, and I guess it didn’t hurt that they were kind of racist Samoans – Kalani and Asuelu.  I seriously felt like Asuelu had to have been dropped on his head a bunch, or was the one Samoan who tried to be a wrestler like all other Samoans, but learned that he couldn’t capitalize on headbutts like all the rest of his people, but to cut to the chase, home boy was as dull as a 40 watt-bulb.  Like, I legitimately felt that he was kind of special needs, based on his child-like intelligence, behavior and his slow speech.  And then Kalani was surprisingly foul-mouthed and not really the most pious Mormon out there, but then again, TLC probably wouldn’t have picked them if she had her shit too together.

Needless to say, they were probably the closest thing to being the season’s anchor couple, and the ones I found to be really otherwise boring and hard to care too much about.

As for the others, it’s hard to really rank them.  Or maybe not.  Thinking about it, they seem to fall into place easier than I thought they would be, but they’re all still trainwrecks that made future wifey and I bemoan at the screen over the stupidity that some of these idiots actually involved themselves in.

Jon & Fernanda’s big issue was the fact that Fernanda was just but 19 nubile years old, and their drama was pretty superficial and paper thin.  The biggest obstacles they dealt with throughout the show was Fernanda finding a thong of a former tryst inside of a random dresser on her first night in America, and Jon’s mom being kind of a vapid c-word, because apparently she and Jon had a fallout of undisclosed reasoning in the past.

Also, there was an incident at a club in Jon’s favorite place in the world, Myrtle Beach (lol), where some rando drunk chick started grinding up on Jon, only to be conveniently caught by Fernanda, which led to an over-the-top blowup in public, but frankly, the whole thing seemed very artificial, and I have no doubt that TLC producers kind of orchestrated the whole incident to be spicy tv.

In fact, that would be something that I had suspicions with over the season, like TLC intervened occasionally to drum up drama and try to steer some of the couples.

Like with the case of Ashley & Jay, whom they were basically a younger re-run of Melanie & Devar from season 4, all the way down to it being a white blond girl from bumfuck, Pennsylvania, getting hitched with a younger black guy from Jamaica.  Despite Ashley’s full capabilities to ruin relationships completely on her own stupidity, when things looked like they were headed for a fairly uneventful 90 days into a wedding, there was an incident where supposedly their wedding website was getting bombarded by “hundreds of hateful messages” including racism and threats of harm.

I mean, if TLC didn’t make this shit happen, then it’s a whole other story of needing to get the law involved and trying to find some perpetrators for threats.  Otherwise, their arc didn’t really get that interesting until after they got married, to which again, if it weren’t in the plan for TLC, why would they be filming after the marriage in the first place?  But Jay, being the 20 year old shithead he is, was naturally caught in the act of using Tinder to try and meet other women, and then their story comes to an end, presumably so that TLC can have content for the spin-off series, Happily Ever After?

Steven & Olga was the seemingly designated reverse couple of the season, with Steven being the one to go abroad, to Russia, to reunite with Olga, whom he had knocked up while she had been vacationing in of all places, Ocean City.  Naturally, he shows up just in time for Olga to give birth to their bastard kid, and turn into a monumental shithead douchebag he’s advertised to be on the cover of the book, and then it’s a season of Steven being a dick, the viewers thinking Olga is way too good for him (not to mention she snapped back like a god damn rubberband), and then more of Steven being a dick, because he’s 20 and stupid.  But it’s like TLC brass told him to reel it back in, lest he be forever branded as a dick, and then he managed to salvage some dignity by the end of the series.

Eric & Leida was the formulaic white guy getting a mail order bride from Asia, but the twist on this trope was that Leida wasn’t some poor girl from the Philippines or Thailand.  Instead, she’s the daughter of a very well-off and wealthy Indonesian surgeon, and basically lives in luxury there.  But presumably because she’s vapid and wants to be on television, she gets involved with Eric, a loser who actually uses the phrase “former Marine” to describe his background, from Baraboo, Wisconsin, and their season is basically him letting Leida down over and over again, because he’s poor and she’s used to rich, her threatening to go back to Indonesia 50 times a day, and then him selling his soul just a little bit more each time in order to get her to stay.

They’re the classic example of a couple that is completely doomed once the cameras stop rolling, but since TLC really likes to dip back into the wells, that might not exactly happen too immediately.

Speaking of which, it brings us to the, in my opinion, “top” couple of the season, Colt(y) & Larissa.  As much of trainwrecks as everyone else seemed to be this season, I found myself looking most forward to their arc, as the 30-something mamas boy who lives with his mom in Las Vegas in Colt(y), and then the self-proclaimed crazy bitch Larissa from Brazil.  Larissa has big boobs, and apparently so does Colt(y).  Their 90 days are spent with Colt(y) being cheap and disappointing Larissa over and over again, while Larissa has to deal with Colt(y)’s in-house mom, racist cousin, and internally debating on whether or not life in America is actually better than Brazil.

I won’t spoil anything but they’re definitely the all-stars of the season.

Regardless, I felt that TLC tinkered too much this season, and the episodes were way too fucking long, at like nearly 90 minutes a pop.  I’m exhausted from it, but the reality is that I only need a little bit of time to pass before I’ll start back-filling my need for more trash tv with watching the tell-all episodes, or the spin-offs.

90 Day Fiancé is the very definition of a guilty pleasure, and frankly I can’t wait for more episodes in the future.  Lord knows the world is full of dumb and/or vapid couples willing to participate, and TLC will find them.