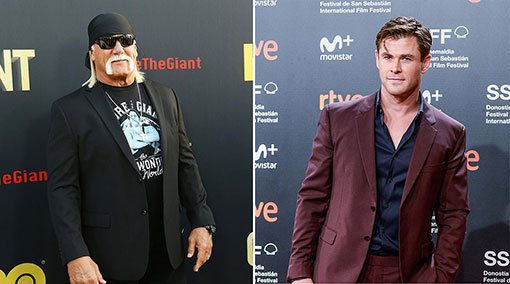 I have a lot of mixed feelings about this.  My knee-jerk reaction is “oh fuck no, how dare someone try to profit on my nostalgia??”  But when I take the time to read about the details of this project, there are more reasons to feel like it might not be as terrible as I initially would assume it would be.

Namely the fact that Hulk Hogan himself is overseeing the whole thing, and that it’s going to be distributed by Netflix.  And Netflix is pretty solid when it comes to creating original content that doesn’t always suck beyond belief; and it’s funny that I hold more stock in the fact that Netflix is helming this over the fact that Hulk Hogan is consulting over his very own biopic as reasoning it might not be terrible.  As much as I love the Hulkster, the guy hasn’t always been the bastion of good decision making throughout his career and life.

Don’t get me wrong, my optimism for this is kind of at like a… 40 out of 100, in that I think there’s only a 40% chance that this is going to be any good.  Netflix or not, it’s probably going to be a trainwreck all the same, because although Hogan and Netflix are involved with this, it’s worth mentioning that one of the producers in this is still Eric Bischoff.

Look, nothing against the man himself, but as history has shown, combining Hogan and Bischoff has led to a notable amount of failures.  They basically tanked two separate wrestling federations when they got together, and who knows how many other business ventures they’ve sabotaged, inadvertent or deliberately.  It’s no secret that both could probably benefit from the payday of a Netflix project, but if this is the only reason why they’re doing it, it’s doomed to fail before it even gets off the ground.

Let’s not forget that although Hulkamania ran rampant over Gawker in court and was awarded something like $140 million dollars in punitive damages, that’s under the assumption that they had $140 million dollars to actually give Hogan.  Of course they didn’t; if they already haven’t, they’ve probably declared bankruptcy and Hogan will get peanuts in comparison, leaving him still basically broke, likely still anchored down by his gold-digging ex-wife, and his fuck-up of a kid that I don’t have the care to exert to look up whether or not he’s in jail or not for vehicular manslaughter.

So that’s another strike against this project, because the likely impetus for all this is probably money, and not because Hogan really wants to tell the story of his journey to the birth and rise of Hulkamania.  Frankly, Hogan’s personal life is about as fascinating as his professional life was, and there’s not a person out there that would be remotely intrigued by the sex tape scandal that kind of ironically put him back on the map over the last decade.  But it’s already been stated that it’s primarily going to be about just the early stages and rise of Hulkamania, so I’m guessing it’s just kind of a story about the early days of Hulk Hogan the wrestler, and probably concludes after Wrestlemania III;

At this stage of the project, there’s literally nothing but a list of names that will be involved; and although there are some notable names involved, I have to wonder just how many of the stars involved aren’t just closet fanboys cashing in on an opportunity to work with Hulk Hogan?

Naturally, the biggest name of them all is Chris Hemsworth, or as the world likes to recognize him now, as Thor, who has already been set to be portraying the Hulkster himself.  My knee-jerk reaction is “why him???” but I also realize that that would probably have been my reaction no matter whom was announced for the role.  Frankly, they could very easily have done worse than Hemsworth, who is already carved out of granite and kind of pre-made to be Hulk Hogan, and it doesn’t hurt that he already had Hogan’s personal endorsement as the person most ideal to play him.

Personally, I think Hemsworth is too much lean muscle and not the steroid and protein bloated muscle of an 80’s pro-wrestler, but again there could be so many worse guys to play the role.

Aside from Chris Hemsworth, I’m really curious to find out who they’re going to cast to play the people in early Hogan’s career that I also realize that I know a tremendous amount of than I’d care to admit.  But who’s going to portray Brutus Beefcake, his early-career “brother” as the Boulders?  Pat Patterson?  Bobby Heenan?  And of course, who’s going to portray Vince McMahon?  Rowdy Roddy Piper?  And you can’t talk about the rise of Hulkamania without Andre the Giant, and I’m really curious to know who they’re going to cast as that iconic role?

Regardless, despite the large amount of skepticism I have about this project, there’s no doubt in my mind that I’m going to watch it.  I don’t have high expectations for it, but I certainly hope that I’m pleasantly surprised.  Frankly, I was super skeptical and dubious about Netflix’s Cobra Kai series, but I actually ended up liking it way more than I thought was possible (although I’m back to being super skeptical on the idea of a second season).  I just hope it’s remotely competent and not too heavy on the cheese.