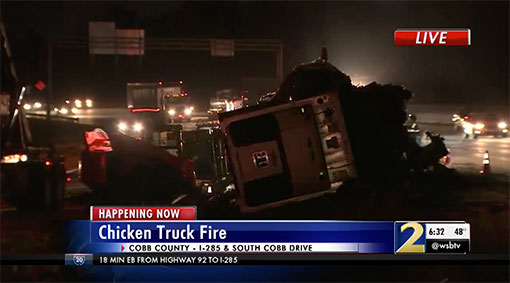 Unfortunately, it did not, even with forty thousand pounds of chicken on fire not that far from where the office is.

It’s been a while since there’s been a good story of food getting spilled onto Atlanta highways.  I think the last time I wrote anything about the subject, it was the kind of self-conflicted incident where cows got loose on I-285 and I-75 where at first I wanted to make jokes about how there was free beef on the roads, but felt sad and empathetic for the actual living cows that were probably just scared beyond measure, wandering wildly around in search of safety.

In this time, it’s not a new realization, but I’ve found plenty of evidence that I’m far from the only person fascinated by the topic of trucks overturning on roads, spilling their cargo all over the place, although I try to keep it mostly local to Atlanta or just Georgia if I can.  I don’t have my own (still defunct) site to refer to for stories about trucks overturning, as much as I’d like to be an authority on the topic.

But this also isn’t the first time that chicken has been on the menu on the roads of Georgia.  However, this is still somewhat fascinating in the simple fact that there was just so much of it.  I mean, 40,000 lbs. of frozen chicken – that’s a whole lot of god damn chicken.  I can’t imagine the sheer number of chickens necessary to get 40,000 lbs. of it, much less the fact that that’s probably factoring in the lack of weight from the parts that aren’t meant for average consumption.

What makes this story kind of different aside from being, god damn, that’s a whole lot of chicken; it’s the fact that it was pretty much all cooked and prepared on the spot for all gawkers and onlookers crawling by a blazing barbecue on the side of the road.  Almost all other stories in the past here have usually been just raw meat or parts of pigs that just flop out onto the roads after they fall out of the trucks, or they’re other contained or consumable goods like eggs or cans of beer that spill all over the highways.  It’s rare that the meat that gets dumped onto the road is immediately prepared for the world, right on the spot.

For that part alone, this incident does get some memorable notoriety in the archives of food stuffs spilled onto Georgia highways.

Naturally, the good news is that nobody was hurt, and despite the fact that this is kind of relevant to my morning commute, my ride didn’t seem to be at all affected by it, regardless of the fact that I was apparently on the road while this was still going on.