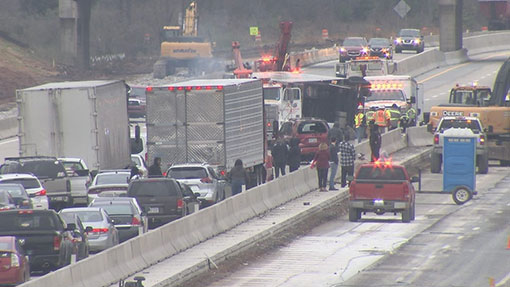 It didn’t happen in Georgia, but this is still a nightmare scenario of an overturned truck crash that I feel is worth mentioning, just based on the sheer severity of just how badly it owned everyone involved.  But in North Carolina, a little north of Charlotte, a Harris Teeter truck overturned, and blocked both lanes of I-85 northbound, for numerous hours.  The wreck was so bad, and the cleanup so long, emergency crews had to deliver a portable toilet to the scene of the accident, so that drivers stranded for over five hours could relieve themselves.

Let’s be real here: it’s the part where a port-o-john had to be delivered to the area that really caps this whole thing, and I think this is a good example of a true video game boss of a truck accident, if there ever could be one.  If there’s one thing Atlanta has going on for them, is that their highways always tend to have like 4-6 lanes each way, so even if a truck falls flat, at the most can only really cover up three of them, and drivers can always find ways around.

I’ve driven across this stretch of I-85 numerous times too, so I’m quite familiar with the area.  Frankly, I’m surprised at how anyone can overturn on roads so straight, but further details show that the truck swerved to dodge a disabled vehicle, and considering this stretch of I-85 has been “under construction” as long as it’s taken Northern Virginia to complete the Capital Beltway, there haven’t been shoulders on this expanse in a decade, so if a car is incapacitated, it’s happening pretty much in the middle of traffic.

Honestly though, this is kind of one of my worst driving nightmares, topped only by if I were the one in the wreck.  Being stuck in a wreck so bad, that traffic is completely incapacitated, and not knowing definitively if it’s going to take ten minutes or ten hours to clear, so you’re in a situation where you’re leaving the engine running, burning up finite fuel, and if the urge to have to go to the bathroom starts to emerge, having literally no way to alleviate the situation.

I guess I should give some kudos to NCDOT or whatever agency read the room appropriately enough to have the wherewithal to get a port-o-john out, which I’m sure was an adequate enough red flag for the unfortunate saps stuck in traffic to know that they should probably kill their engines and save the gas, and have a modicum of relief knowing that there was an actual place where they could relieve themselves.

Although, it kind of sucks that it looks like only one port-o-john was set up, because once a line starts forming, you know that if you’re not the first one up there, you’re one or more people in front of you to blow up the shitter, from being owned.  And it doesn’t get much better for the perpetrators of ruining them, because with traffic at a complete standstill, there’s literally nowhere to run from the glares and judgment of your toxic bowels exacerbating the misery to everyone else.  Ultimately, I guess as long as it prevents the indignity of just shitting on the side of the road is all that matters, but in the end here, this is the epitome of ownage through and through.

However, in spite of all this, it doesn’t really look like any of the groceries spilled all over the roadways.  Reports claim that all the cargo had to be cleaned up, which was what led to the vast majority of the delay, but it appears that it managed to stay contained within the container overall.  I mean, that’s great for the fact that it not spilling all over the place helped cut down on time, but for people like me that like the visuals of seeing all sorts of food stuff shit scattered all over the place, this is a little unsatisfying.

Regardless, this is a true nightmare truck crash.  It sucks for those who were unfortunate enough to have been a part of it, and all it really says to me is that North Carolina DOT needs to get off their asses and get on it, fixing up that huge desolate stretch of I-85 in between Charlotte and Greensboro.  It feels like it’s been under construction since the dawn of time, and the only thing really missing is the gif of the stick figure with the pickaxe to disclaim such.