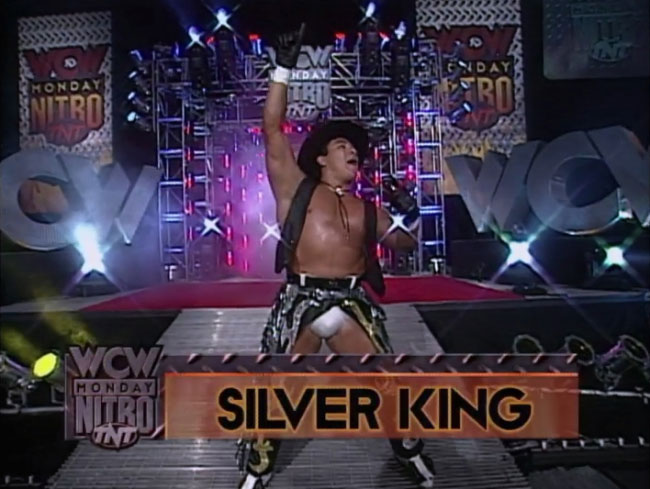 If most people heard the name César Cuauhtémoc González Barrón, they’d have no clue to whom that was.  Frankly, if most people heard his ring name, Silver King, they’d probably have very little clue to who he was, either.  Then again, I am some lowly brogger living in America, and I’d wager to say that those who lived in Mexico, the names probably would definitely trigger more recognition than it would anywhere outside of the country.

Silver King passed away on May 11, 2019, inside the wrestling ring, while performing at a show in London, England.  Reports say it was due to a heart attack, but there’s still no official cause of death released, officially.  He was wrestling fellow luchador, Juventud Guerrera when this tragedy occurred, and it’s definitely a sad day in professional wrestling when one of the boys goes out so suddenly and unexpectedly.  Silver King was 51 years old, which definitely classifies as “way too soon,” especially considering he was still actively performing literally up until his death.

Although his career legacy is vastly greater and more colorful when you look at his accolades in Mexico and pretty much anywhere outside of the United States, I always remembered him the most from his time in WCW, when unfortunately he and many other Mexican wrestlers were primarily a part of the company to be jobbers and/or the guys to warm up the crowds, usually by jobbing.  But I’ve always had an affinity for the jobbers of wrestling, because most of the time, superstars are boring and one-dimensional, and it’s only by the strength of the guys doing the jobs to them, do they even look good.

I remember just about all of them from WCW; Silver King, El Dandy, Damien, La Parka, Psychosis, Villano IV and V, Hector Garza, Ciclope, Lizmark Jr. and Juventud Guerrera.  And it’s not just out of convenience to fit my narrative, but Silver King always stood out to me, because he was one of the few Mexican expats on the roster, that wrestled without a mask.  Furthermore, he was always a little on the tubby side of stout, yet in spite of his bulk, he was still as agile and high-flying any other luchador, which just added to the ironic entertainment value he brought to WCW.

Although he never really achieved any notable success in WCW, I was always entertained whenever he actually got any screen time.  There was once a match where Silver King had a match with I think it was Dean Malenko, and the entire match came to a screeching halt because Chris Jericho decided to interrupt the match so he could read a list of the 1,004 holds he knew, to further his feud with Malenko.  I remember an irate Silver King simply being escorted out of the ring and out of the arena with no conclusion to the match while this was occurring, and thinking man, how disrespectful to shit on Silver King like that.

Back in 2000, there was a very specific episode of Thunder where I got last minute tickets, and had a sign in the crowd that was on the show throughout the entire episode where on one side said “MR. TITO SUX” and the other said “FROOT BOOTY.”  I still have this match on a VHS recording somewhere, and to this day it still provides an entertaining story for my friends and I, because FROOT BOOTY was blurred, and the aforementioned Mr. Tito was this whiny internet columnist we wanted to drop down a peg who we knew saw it, based on the reactions from his column in following days.  Well, on this episode, was probably the pinnacle of Silver King’s WCW tenure, when he was paired up with El Dandy, and they were packaged as Los Fabulousos, most primarily known because of the fact that they were accompanied by Miss Hancock, AKA Stacy Kiebler.

Although I’m pretty sure they did the job then too, that night, I still remember their ring entrance, where Silver King would get right up into the camera and lick his thumb and pinky and sweep his fingers across his eyebrows, trying to be all Rico Suave and failing miserably because he’s kind of dumpy and a jobber.

It wasn’t long after the inevitable failure of the Los Fabulosos gimmick did Silver King and presumably countless others were released by WCW.  I never really bothered to follow what happened in the rest of his life afterward, although I learned that he was in the Jack Black film, Nacho Libre.

The thing is, at least within my circle of friends, Silver King wasn’t just a wrestler, he became an identity.  At the Brazilian restaurants where I’ve eaten countless pounds of meat and brought numerous friends to dine at throughout the years, the guys that went around the restaurant delivering meat on skewers to the tables, were all deemed Silver Kings.  Their uniforms, complete with cowboy hats, were basically the same attire that the actual Silver King wore to the ring during his time in WCW, and therefore the association became a thing and then it became permanent.

From then on, regardless of their uniforms, all servers at Brazilian restaurants became Silver Kings.  The actual Silver King may not have gotten the respect and admiration he might have deserved in WCW, but to my friends and I, Silver Kings were integral parts of our dining experiences and commanded a necessary resepct.

Becoming commonplace vernacular among my friends and I, I can’t think of any more level of respect that Silver King possibly could’ve gotten outside of the wrestling community.  I am definitely sad to hear that the man that started it all has left us, but at least I can take solace in the fact that the name Silver King will never be forgotten, and never have the risk of not being spoken again, because as long as there is meat to be eaten at Brazilian restaurants, the idea of Silver Kings will never die.