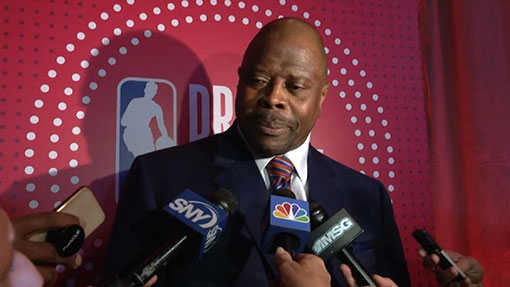 As I’m sure I’ve probably said before in my brog, when I was a kid, I used to love the New York Knicks.  Starter jacket, baseball cap, Ewing jersey, always played the Knicks in NBA Live and NBA Jam, etc.  The worst moments in my sports fan life back then were when the Knicks lost to the Houston Rockets in the 1994 NBA Finals, and then when they lost to the Indiana Pacers in the 1995 playoffs when Patrick Ewing missed a fucking finger roll.

Needless to say, I eventually learned what just about everyone who ever follows the NBA eventually learns: there’s no team that symbolizes failure more than the New York Knicks.  Back in the day, it was the torture of having a competent team make the playoffs every single year, but then losing via the existence of Michael Jordan, or because simply they’re the Knicks.

Despite the fact that I only follow the NBA as much as ESPN and the news covers it occasionally, it doesn’t take a blind person to not see that the Knicks are still pretty much the living embodiment of failure in the NBA, except now they’re a shitty team that doesn’t even make the playoffs, and no matter what moves they make or whom they acquire in free agency, they can still never get over the hump and even sniff what a playoff chase even smells like.

To my understanding, the Knicks have tried tanking 350 times over the last two decades and at a quick glance, have finished under .500 like 18 out of the last 20 years.  Twice, they finished with 17 wins, which is futility that has to have effort put into it, because practically three-quarters of the league gets into the playoffs, it takes a conceited amount of effort to actively not make it.  Yet in spite of all these shitty seasons, the team can still never cash in on the draft, and they just continue to suck year after year.

The whole lottery system is something that I actually do love about the NBA, because it does actively attempt to deter teams from tanking, because unlike in MLB and the NFL, the worst record does not automatically guarantee the first pick in the draft.  Subsequently, the lottery has pretty much existed to troll the Knicks into having one additional layer for them to fail through, and it’s never been more prevalent than just this past lottery.

The big story in basketball over the span of the last two calendar years has been the saga of basketball phenom prodigy, Zion Williamson, from his rise in a South Carolina prep school, to his mandatory year in college, which ended up being the reviled Duke Blue Devils, the controversy of the sports century when his foot exploded out of his Nikes, injuring him, to his inevitable position as the very obvious first pick in the upcoming NBA Draft.

As Zion posted highlights after highlights for Duke, the NBA gave a college try for the first month of their own season, before the pretenders then immediately began a tanking spree, with the hopes of having the best odds in the lottery, which would increase their chances of getting the first pick, which was obviously going to be Zion Williamson.

And the Knicks did what they did best, which was lose basketball games, and despite the Cavaliers and Suns trying their best to keep pace, they still finished with a pathetic 19 wins apiece, worse (or better?) than the Knicks.  Regardless of the difference in W-L records, the Knicks, Suns and Cavs all had an equal 14% chance of getting the first pick in the draft, which was the highest among teams in the lottery.  All three teams had high hopes that their team’s ping pong ball would be drawn, and they’d have the rights to get Zion.

Because sports are full of superstition, the Knicks attempted to go all out, and drafted the presence of Patrick Ewing, the Knicks legend that brought the team out of the basement and made them perennial contenders for the better part of his entire career.  He was also the living symbol of the success of the lottery, as the Knicks won the first pick back in 1985 and immediately selected Ewing, who was basically the Zion Williamson back then.

But as symbolically good of an idea it was to get Patrick Ewing, the Knicks failed to consider the drawbacks of such a move: Patrick Ewing is basically the living embodiment of falling short.  Despite elevating the Knicks to a playoff contender, Ewing’s legacy in the NBA is basically pockmarked with all the times he’s fallen short of success, all the times he’s been bounced in the playoffs, and how many times he’s been dunked on by a litany of NBA greats, most notably Michael Jordan.  Punctuated by the simple fact that he never won a championship in his entire career.

When I heard that the Knicks had enlisted Patrick Ewing to be their representative for the lottery, I would’ve bet my house that they weren’t going to get the first pick.  Easy for me to say after the fact, but I still would’ve been willing to put a good chunk of money on the line that the Knicks would fuck this all up.

And naturally, the Knicks failed.  Not only did they fail to get the first pick in the draft, so did the Suns and the Cavaliers, the two other teams that failed to win 20 games.  Not only did they all fail, a bunch of teams that probably didn’t tank and just stunk also failed, in the Bulls, Wizards and Hawks.

In the end, it was the New Orleans Pelicans, a team that won 33 games, and had just a paltry 7% chance to get that lucky pick, that got the first pick, and you could practically read the lips of RJ Barrett who was sitting next to Zion Williamson saying “LOL U going to be a Pelican.”  You could practically see the bemused astonishment on Zion Williamson’s face, as there was a mix of excitement of finally finding out who was going to draft him and disappointment that he was headed to New Orleans, a franchise with practically no history,* no superstars to follow in the footsteps of, and a general small market, especially in comparison to all the cities of the teams that had better odds at getting him.

*Yes, I’m sure there’s someone in the NBA top 50 that probably played for the New Orleans Jazz or some shit, but who here is going to give a fuck to look it up?

Regardless, the world is now in the hands of the Pelicans.  As one of my designers, who is from New Orleans stated, the Pelicans now hold all the cards.  They can try to build a team around Zion, or they could even trade Zion as well as any of their other assets and try to construct a mega team from the bevvy of draft picks and leverage they’d harness by being willing to part with him.  Or, they simply do the obvious and keep Zion and try to entice more talent to the Pelicans, so they can be the next team to constantly job to the Warriors in future years.

The point of all this is that in end, the Knicks still failed, in spite of their best efforts of tanking and enlisting Patrick Ewing.  But for me, it’s the latter that basically sealed their fate, and it’s foolishly optimistic thinking that a franchise notorious for failure would call on the aid of a former player who was notorious for failing, and think that the best possible result was going to pan out.

But then again, the Knicks simply wouldn’t be the Knicks if they didn’t constantly make all the wrong moves and ultimately end up losing in the end.