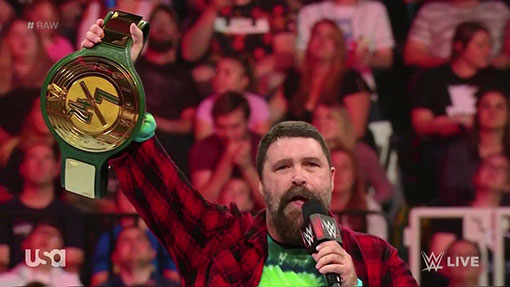 Around this time, I made a goal for myself that five would be the number of belts I would aspire to get, because at the time, I had this perfect corner shelf for championship belts that had five spaces, and I thought it would look great with every shelf occupied.  Eventually, I tracked down an attitude-era WWF World Championship belt, and after one fortuitous trip to Las Vegas, my brother and I each got ourselves a WCW Tag Team Championship belt to signify our life-long unity.  The shelf was now full.

But then one of my best friends got married, and I just so happen to track down a set of WWF Tag Team Championship belts, so I decided to signify that life-long unity with another belt.  Then, I just so happened to be farting around on eBay, and stumbled across a WCW Big Gold belt replica.  And then for whatever reason I was on eBay again, and came across an ECW Television Championship and threw out a fairly low best offer, which was miraculously accepted.  And then Cody Rhodes bust out the white strap Intercontinental championship which inspired me to go look on eBay, and I came across an egregiously low-priced classic WWF Intercontinental Championship and it was unavoidable.

I actually don’t remember the context to what made me look for them, but I came across a pair of ECW Tag Team Championship belts, and I purchased them, and gave one of them to my brother.  I’m pretty sure it was as a birthday gift.

This put me at ten belts.  A nice round number.  It seemed like a good place to stop.  My shelf was long since full, and I’d actually been keeping an eye out for another one just like it, and had come close a few times at a few antique markets in my area.

But then one of my close friends gave me access to his WWE Network account, and I started watching NXT.  And then I saw Andrade Cien Almas vs. Johnny Gargano and suddenly I really wanted to get an NXT Championship replica.  Shortly after that, I started watching some New Japan stuff after hearing all these things about this guy named Kenny Omega, and the legendary match he just had with their world champion, Kazuchika Okada.  And then I really felt like an IWGP World Championship was something that my collection needed.

By now, I’ve resigned myself to the fact that there’s probably never going to be a formal “end” to my collection, and thankfully because I display them on the wall, there’s not going to be the same challenges of limited shelf space to limit the growth of my collection.

That being said, this is a convenient way of saying that I’ve already got my eye on more belts to add to my collection, with the most notable one being the NXT UK Tag Team Championship, provided the WWE gets off their asses and makes a replica for purchase.  I also kind of fancy the NXT North American Championship, despite the fact that I have anxiety of getting one and putting it on my wall considering the belt has a bronze strap as opposed to every single one of my other belts that have black straps.

It can go at the very end.

So while watching WWE Money in the Bank, I saw that there was going to be a new title unveiled on RAW, and a part of me got a little giddy at the notion that there was a new belt that could potentially added to the collection.  But since I no longer have cable television, I’m at the mercy of having to wait for the stuff to air before I can catch up through the internet.

Unfortunately, my low-key excitement quickly turned to disappointment upon being introduced to the new WWE 24/7 Championship.  From its stupid name, terrible design (spoiler: it’s the McDonald’s font, which is the same font used in the classic Wrestlemania logo), to the obvious fact that it’s basically the WWE Jobber Championship, which will be cycling back and forth to the ranks of the bloated rosters that don’t get a lot of screen time.

It doesn’t take a wrestling historian to realize that it’s exactly the same thing as Crash Holly turning the defunct WWF Hardcore Championship into the 24/7 title nearly 20 years ago, except the title actually has a little bit of polish to it, and isn’t just a busted up winged eagle world title with duct tape on it.

The only thing remotely interesting about the title is that with its very clear rules that it’s eligible to anyone on any WWE roster, it basically serves as a convenient plot device to allow for some creative crossing over between “main” roster programs like RAW and Smackdown and “lower-but-better” shows like NXT, NXT UK and “205” Live.  But considering Bayley and Sasha Banks kept declaring that the WWE Women’s Tag Team Championship would be defended anywhere and everywhere but then jobbed in 41 days, this idea doesn’t necessarily mean it will actually happen.

The bottom line is that the idea is unoriginal, the belt design sucks, and I most definitely wouldn’t want a replica of this in my collection.