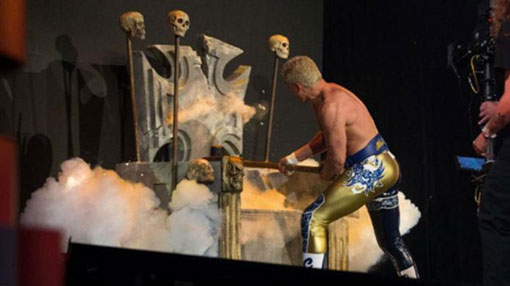 Watching highlight packages of AEW’s company-launching pay-per-view event, Double or Nothing, I definitely thought the company has a pretty solid roster of wrestlers to build upon, but I couldn’t help but feel this suspicion of a lot of things that I think are going to hold them back or just be plain detrimental to their budding fed.

As much as the quality of the wrestling was fairly competitive to the talent in the WWE, ROH or NJPW, it’s mostly the way the company presents itself that makes me feel dubious that AEW has more possibility of being the next TNA and not the next WCW, as someone who really has a chance to stand up to the WWE and really compete.

And I don’t bring up WCW without reason, because as much as WCW really did rise and compete with WWE, in the end they still fell apart and ultimately suffered an end worse than defeat, which was being assimilated into the machine, getting purchased for pennies on the dollar, mostly so that the WWE could have the rights to their tapes archives over the vast majority of any actual living human talent.

But it’s because so much of Double or Nothing felt like they borrowed the WCW playbook for Monday Nitro #1.  From the very start of the show, with “Good ‘ol JR” Jim Ross welcoming viewers to the show, to Justin Roberts doing the announcing in the ring, it was the exact play WCW did using Bobby Heenan and “Mean Gene” Okerlund to be their voices and kind of trick casual fans into getting a feeling of familiarity and hopefully stick around.

Then came a really convoluted battle royale featuring their young and mostly lesser-known talent, peppered in with, former WWE guys like Tye Dillinger.  Even not knowing who 80% of the competitors in the ring was, it was still highly predictable to guess who was going to be the last few guys in the contest, and when Hangman Adam Page hit the ring, the winner was all but decided, because anyone who follows wrestling knows Adam Page is a part of the clique that basically made a mass exodus from New Japan in order to create AEW.

Then came several matches featuring mostly guys that smarks sort of know or have heard of, versus a bunch of guys that I’d never heard of period.  Don’t’ get me wrong, it doesn’t mean the level of talent isn’t any worse, but I think when you see some names like Christopher Daniels, it’s kind of easy to tell who might win certain matches.

I will say I was amused by the return of Awesome Kong, who probably enjoys getting back into the ring after a ton of exposure from G.L.O.W. on Netflix, even if she did end up not winning the match; ironically Dr. Britt Baker is yet another wrestler with WWE experience, having jobbed pretty badly to Shayna Baszler in NXT at one point.

The Best Friends vs. Angélico and Jack Evans match was pretty good, and as much as lots of fans love fast paced and high flying matches, it was something of a spot-fest, and one doesn’t have to look any further to the Young Bucks vs. the Lucha Brothers to see the difference in quality between spot workers and guys who are pretty good wrestlers outright.

The Japanese women’s six-woman tag match made me think that a bunch of women dressed like Chrono Trigger or Dragonball characters were wrestling.  They were all pretty good in the ring and definitely took some impressive bumps, but in the grand spectrum of AEW, I can’t imagine that they collectively have much of a future other than being a filler match for a PPV that wanted some international flair.

Cody Rhodes vs. Dustin Rhodes was interesting to watch, because both were barely more than mid-carders throughout their entire WWE careers, but they were given a match length that rivaled a Wrestlemania match.  Obviously, both have plenty more talent than WWE actually ever harnessed from either of them, but personally the perceptions of Dashing Cody and Goldust still are too fresh to really make me take them seriously as world beaters.  Much like I had a hard time seeing Shane Douglas in ECW as more than the same guy who was a slightly more elevated jobber in the WWE.

The Young Bucks were obviously not losing their debut match in the federation that they helped get off the ground, and to me, the biggest shock of the night wasn’t the “surprise” appearance of Dean Ambrose AKA Jon Moxley after the Kenny Omega vs. Chris Jericho match, but the fact that Kenny Omega actually lost pretty cleanly to Jericho in the first place.  I would’ve put money on Omega beating Jericho, because I figured both were on the same page that the still somewhat partially unknown to America Kenny Omega was going to get the win over an established star like Chris Jericho, but I guess that was AEW’s attempt at trying to swerve a smarky crowd.  But at the same time, it kind of sense a WWE-like message that their former talent seemed to be getting a lot of wins on the night, much like how it was in WCW.

But the thing that made me cringe the absolute most throughout the entire night was the kind of sad and eye-rolly display made by Cody Rhodes before his match with Dustin, where he took a symbolic sledge hammer and smashed a symbolic skull and iron cross throne; symbolically, since all of the symbolism of the gesture was synonymous with Triple H, whom smarks on the internet feel is the anti-christ of professional wrestling.

To me, the act itself was kind of lame, but most importantly the simple notion that AEW took the time to acknowledge the WWE was kind of a misnomer of sorts, because I’m personally of the book that if you want to act like big league competition, one thing you shouldn’t do is really acknowledge it.  To some, it might have looked cool and defiant, but to me it’s lame and kind of bush league, and I think if the guys at the top of the card and are running the show are going to always be operating with that chip on their shoulder that they need to compete with the WWE, then they’re already in trouble.

WCW had Ted Turner’s billions which kept them afloat for the better part of a decade, and even TNA had Dixie Carter’s energy money to keep them afloat as long as they lived.  Tony Khan and his dad have money sure, but they’re still powered by Jacksonville Jaguars money, and need anyone say anymore?  I love the Jags as much as any fan of The Good Place would, but they’re still the Jags, and there might come a time when Shahid Khan sees his son’s pet wrestling federation as a potential sunk cost and pull the plug.

Can AEW last 13 years?  Because that’s basically how long TNA lasted, before it sold and transformed in Impact or Global Force, or whatever it’s called these days.  I’m dubious and have doubts that it can, because there’s not a tremendous amount of leadership behind the company save for several active wrestlers, whom are always one selfish choice to put themselves over at an inopportune time from losing the faith of fickle wrestling fans.  Plus, the general backbone of AEW, with Cody, the Bucks and Kenny Omega are all kind of niche popular, with their Being the Elite YouTube channel, and as much as they’re beloved by smarks, how much long-term appeal can they gain from the masses?  Because those are the ones who fill the coffers of the WWE, and it’s those casual fans who typically spend the most money on a consistent basis.

Oh, and AEW’s world championship looks terrible.  It’s like the old ROH world title, and the plates are too tall and it’s too chunky and blingy.  Much like the stupid WWE 24/7 championship, it’s a letdown in championship belt design, and I have very little concern that I’ll actually want one.