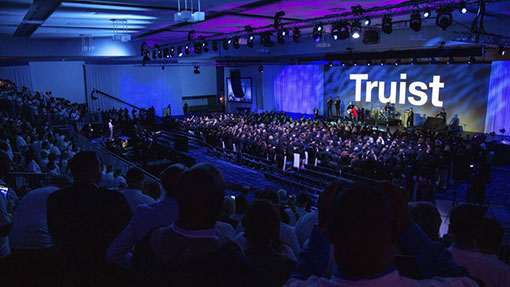 I mean, I can’t say I’m the least bit surprised that this ended up being something as lame as this.  Fewer things in the world are as square and soullessly uncool as the entire banking industry.  I mean, it’s an industry that’s basically built on storing the money of people that are not themselves, and finding every single possible way to take cuts and slices from them in order to profit.

I even yawned heartily while typing out that line, that’s how lame the whole concept of banking is.  I can’t believe I worked in the industry as long as I did, and in some degree of retrospect, I kind of have to thank them for being the tools they are and laying me, as well as my entire department off, because they kind of did me a favor of getting out of the banking industry.  I mean seriously, it paid the bills pretty well, and I would’ve have free parking for years during Dragon*Con, but I have to say that it wasn’t a whole lot of fun saying I worked for SunTrust; as large as it was in Georgia and the eastern seaboard, it was still a regional bank and it was the equivalent of saying that I worked for like, Habib’s Fuel & Automotive in the grander spectrum of the world.

But back to the point at hand, with the name of the unholy union being established, that means that without any further question, the home of the Atlanta Braves is soon to become Truist Park.  I had to wiki it to make sure that it was going to be the de facto lamest name in all of Major League Baseball, but since I’ve completed my quest to visit all 30, I’ve fallen a little to the wayside when it comes to ballpark names.  And as gargantuan-ly lame as Truist Park is, I think there is some stiff competition when it comes to comparing to Guaranteed Rate Field (Chicago White Sox, replacing “The Cell” US Cellular Field (the worst park in MLB)) and RingCentral Coliseum (Oakland A’s, who are always plagued with bad names).  Ultimately, it’s like comparing herpes to chlamydia and gonorrhea, because no matter which name you have, it sucks.

Given the propensity of the Atlanta Braves to always go in the direction of profit > style, it’s no surprise that they’re going to be perfectly at home playing at a place called something as boring, vanilla and lame as Truist Park.  But damn if they aren’t going to get rich cashing in on those naming rights, despite the fact that the product on the field isn’t going to benefit one iota from said proceeds.  A bunch of old white guys need to take their slice of the pie first, as well as their seconds, before the Braves have any chance at possibly getting a little bit of forward investment to maybe succeed.

I hear winning is pretty lucrative, but the risk-averse Braves don’t really seem the type to risk possibly finding out.  But misery loves company, and I think it’s pretty safe to say that pretty much any team not the Houston Astros seems pretty content on sitting on cruise control and cashing in on revenue sharing, and if they happen to win, great, but if not, that’s perfectly okay as well.  Fuck that, and fuck Truist Bank.  Need to figure out a simplistic and punny name for the new park, because “ScumTrust” is running out of time.