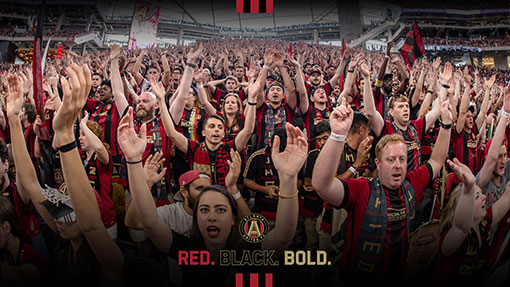 Driving around Atlanta, there are often a lot of tells on peoples’ cars that indicate the race of the people driving them.  Some are pretty blatant, like how white people all love to have shit like stick figure family stickers, black people have big flashy rims or the content of Africa silhouetted in some way shape or form, or Hispanics having pictures of their trucks airbrushed onto their trucks, while being looked over upon by the Virgin Mary.

However, some tells are more subtle, but no less obvious to those who see them.  Like blackout license covers or (likely) illegal shades of tint or a box of Kleenex wrapped in an ornate satin box cover sitting in the back window.  But there’s no more obvious tell that a car belongs to a white person in Atlanta, than an Atlanta United sticker or emblem on it.  Because there’s nothing short of Ponce City Market and talking about gentrification and urbanism that white people in Atlanta like more than Atlanta United soccer.

And then it got me thinking beyond just Atlanta United, and about soccer in general, specifically MLS.  And how it really seems like MLS has become the de facto preferred spectator sport of choice for white people, even above the NFL, NBA and MLB.  The more cursory internet glancing I do, I’m seeing that in major cities like Toronto, Seattle, Portland and Philadelphia, if you take snapshots of the crowds, they’re unmistakably overwhelmingly white.  It doesn’t seem like a lot, but that’s really all the justification I need to make my snap judgments; I’ve been to enough cities to watch sports, and despite being in different states, they really aren’t that much different from one another.

Ultimately, I think white people loving MLS really boils down to two very obvious white people traits: racism and a lack of commitment.  A low-key third would be the fact that so many are hipsters, so naturally, they gravitate towards a lower-tier popularity sport, especially if it meant that there were fewer minority fans to have to mingle with.

But frankly, upon thinking about it, it kind of makes perfect sense why white people love MLS so much. Go to any NFL or NBA game, and it’s abundantly clear that black people love football and basketball.  And the average white person is often times afraid of the average black person, so it stands to believe that white people don’t like going to these sporting events, because it puts them in too close proximity with those that intimidate them.  When the home team does well and the black people get excited, it scares the white people.  But when the home team loses and the black people get butthurt, it scares the white people then too.  This isn’t to say that white people avoid these sporting events outright, but typically they tend to go when they have privileges like corporate box seats, or are in large enough numbers to where they manage to feel safe, but even still it’s not the same white safety as an MLS game would be.

Considering that Major League Baseball’s player pool is but just 8% black people, you’d think that white people would be all over baseball.  Except for the fact that white supremacy is harshly contested by Hispanics, and when you combine the Hispanics with the blacks and the “other” races, then white people do become outnumbered by minorities, but not by much.  Regardless, that’s often times good enough justification for white fans to steer away from baseball, but ultimately, there’s a larger reason for the abandonment of the great American game that has nothing to do with race at all.

With 162 games in a season with a whopping 81 home games for every team, that’s a whole lot of games to commit to being a fan for.  And as I’ve observed with white people, commitment is a really difficult thing for many of them, and asking white people to amp up for as many as 81 home games is just too much.

Conversely, the MLS season is but just 34 games, with 17 of them being home games.  17 is vastly less than the 81 and 41 home games in MLB and the NBA, but it is still greater than 8 NFL games.  17 is the perfect number of games where white people can act like hardcore sports fans and take a zillion pictures for social media of them at a sporting event, because that’s also another white past time that’s a low-key factor in why MLS is their preferred sport.

Also, baseball games, especially ones in Atlanta are very hot.  White people are often quite temperamental when it comes to weather conditions, and when Atlanta United alternatively plays indoors, where the climate can be better controlled, it’s a no-brainer that they’d prefer to go there than to ScumTrust Park.

There aren’t nearly as many games for them to have to commit to, but there are still more than the NFL, which gives them that feeling of superiority that they can be obnoxious twice as long as fans of the NFL can, but without having to be around nearly as many scary black people.

This isn’t to say that MLS doesn’t have fans that aren’t white, I mean in the picture above there are like… two black people in that sea of snow.  Maybe a few Asians sprinkled in.  But make no mistake, MLS is truly the white peoples’ sport of choice, and frankly I find it very amusing.