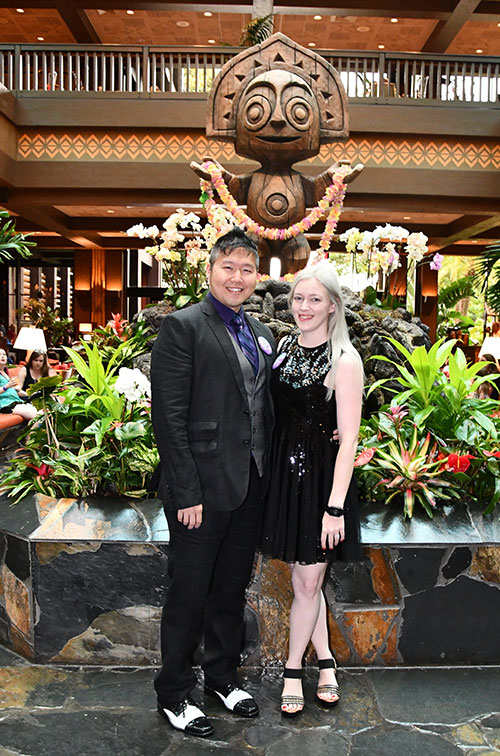 Honestly, there’s not nearly as much to say about the honeymoon as there was the wedding.  Frankly, much of this was split into two posts mostly because of my OCD of wanting to make sure a wedding photo was with the wedding post, and so that some picture from the honeymoon can also get displayed independently, therefore necessitating its own post.  Still, not to say that I can’t spout off about a honeymoon, but in the interest of transparency, this is the true impetus of this post coming to fruition.

Frankly, we’re just happy to have done a honeymoon, especially immediately after the wedding.  We’ve seen it happen to enough couples, where a honeymoon is planned anywhere from months to an entire year after the wedding to actually happen, and in some cases not even happen at all.  Yeah no, no disrespect to those who embark on similar paths, but the both of us most definitely wanted to have an actual honeymoon, where we could actually relax and take a well-earned break from the life of planning a wedding on top of our normal working lives.

In a nutshell, we went to Disney World for a few days, stayed at the Polynesian resort, and then transitioned onto a Disney cruise for the next week, where we sailed to Mexico for a few days, hit Disney’s private island Castaway Cay for a day, and then came back home.  The wife drove most of the itinerary, since she’s at least 200x more into Disney than I am, but I’m more than happy to go along for the ride, as long as the vast majority of my trip could be spent relaxing, eating like a pig, and generally having very little commitments at all.

Overall, my missions could very well be considered accomplished.  Maybe a little too much, because I still have no earthly idea what I’m doing with my life whenever I have free time back home.  I just watched Chinese Super Ninjas for the 80th time in my life last night, because I couldn’t triangulate on one better thing to do with two free hours than that.

But honeymooning was nice, undoubtedly.  Sure, we spent a staggering amount of money on some exorbitant meals and activities, but in a perfect world, we’ll only get married and have a honeymoon once, and there are definitely things out there that are worth experiencing at least once.

Plus: ate a fuck ton of Mickey waffles, breakfast bacon, sausage and potatoes.  This was definitely one of my primary objectives about going to Disney-everything for two weeks.

Minus: feel like I gained at least 15 lbs.  Seriously, the wife had to deal with me bitching about how all my shirts felt strained and tight around my swollen food baby belly, and tried to convince me that it could all be justified as because we’re on our honeymoon.

Minus: couldn’t find a Juventud Guerrera mask during two shore days in Cozumel and Costa Maya.  Some shopkeepers had no idea who he was, but was astounded that this Chino could pick out Psychosis and La Parka, and one revealed to me that there’s already a guy out there in Mexico going under the name of El Hijo del Juventud Guerrera, meaning “The Son of Juventud” who has a different, and not as cool looking mask for sale, alternatively

Plus: found a pretty good-looking Rey Mysterio, Jr. mask to purchase instead, to have alternatively.  I can’t say I was ever the biggest Rey fan, but it would be disrespectful to not acknowledge that he was still one of the forefathers of lucha libre in America, and should be recognized as such on my shelf.

Minus: picked up a small cold on the ship, because Disney ships are full of gross ass kids, spreading their germs like crazy.

Plus: capitalized on Mexico’s lax pharmaceutical sales policy, and picked up a Z-pack for $22 USD.  The wife got one for herself for future use, and paid $18, and told me that I got fleeced.  Feeling better already.

Most importantly, it was two weeks of quality time of the wife and I by ourselves, and after it was over, she was still my wife and had no genuine inclinations of wanting to kill me.

As a whole, honeymooning was pretty great.  I’d highly recommend it to all other people who are thinking about marriage or about to get married.  Disney cruises are definitely a step above the competition, although unless you get a crazy last-minute need-to-fill-the-boat deal, you’ll probably be paying out the nose.  But the food is great, the service is outstanding, and there’s not a public restroom aboard that isn’t always kept sparkling.  Sure, there are kids crawling all over the place, but there’s no cruise line out there that honestly isn’t; except those creepy adults-only Carnival or Sandals ones, but nobody wants to go on those anyway.