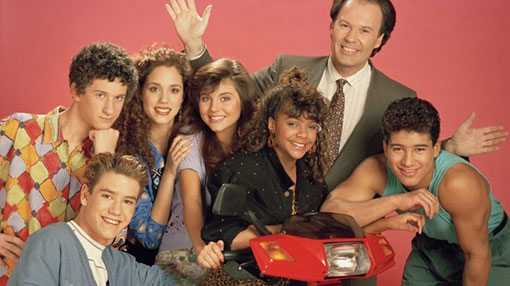 Because nothing from our childhoods are ever allowed to stay dead and buried, NBC has apparently decided to dig up the remains of Saved by the Bell and resurrect the property as a rebooted spinoff for their inevitable shitty streaming service.  Given the fact that the vast majority of shows that I grew up watching have all been rebooted, spun-off of brought back in whatever shameful and cringey manner, this is no surprise, and further exemplifies the sheer pain and suffering of the death of creativity, especially in the television entertainment business.

I pray to god nothing ever comes to fruition with Married With Children, because then I’d really be sad and upset.

Honestly though, this is probably one of the less surprising… I wanted to use the phrase “revitalizations,” but nothing about this general concept seems remotely revitalized, but for all intents and purposes, it is one of the less surprising corpses dug out of the grave to trot back out.  Aside from AC Slater, just about everyone else from the SBTB crew hasn’t really done much noteworthy work with their careers in a while, and I’d imagine they all jumped at the idea of getting to cash in on the low-hanging nostalgia fruit for some easy paychecks.

In some regard, as disappointed as I am to hear that they’ve finally caved and agreed to reprise, I can’t really say that I’m at all that surprised.  I guess it really is only a matter of time before everyone caves, because when the day is over, everyone’s gotta eat, integrity or legacy be damned.

But seriously, I didn’t really think it was possible for a show to jump the shark/DJ Tanner Wrestling before the show even begun airing, but SBTB or whatever they’re going to call this reboot, has.  And it only took five words from the official description to achieve this distinction:

I mean, given the master bullshitter that Zack Morris was, it’s not really surprising that the character was capable of bullshitting his way into politics and ascend to the highest seat in the state of California.  But it’s more astonishing to me that whatever shitty uncreative hack showrunners of this reboot actually decided to run with this moonshot concept and actually make Zack Morris the fucking governor of California.

What more handcuffing to a character’s versatility is there than making someone a politician?  The leader of Zack Attack, the captain of the track team and basketball team, the part-Native American, the environmentalist who lobbied against oil to save some ducks, the anti-drug PSA star who helped Jessie Spano kick caffeine pills, helped the hot homeless girl, basically rescued Tori and had the cojones to square off against all-state wrestling champion AC Slater over Joanna?  That Zack Morris, is now a politician, a civil servant to the people he once lorded over throughout high school (and some of college)?

Yeah, real interested to see how the showrunners write this version of Zack Morris out.  Not to mention, considering the supposed confirmations of Slater and Jessie going to be in it, I wonder what they’re going to be?  Councilwoman Jessie Spano?  Maybe Slater can be Coach AC Slater at Bayside High, who will miraculously be coach of all athletics from football, wrestling, track, basketball and weight training.

And what of Mr. Belding?  Considering Dennis Haskins has been living the life post SBTB, bouncing from minor league baseball parks to whatever clubs or events is willing to pay him appearance fees, I’m sure he might as well just glide right back into being Mr. Belding, the distinguished principal of Bayside High, and the more straight and wholesome compared to his slacker brother Rod.

What’s amusing to me are the obvious non-reprisals of the old SBTB cast, namely Screech, since Dustin Diamond has pretty much dedicated his post SBTB life to tearing down the rest of his co-stars, and scraping by to remain relevant by staging sex tapes or doing celebrity boxing, and has basically burned every bridge there was to NBC.  I think Lisa Turtle got on crack or some drugs at some point, and if there was any one cast member to burn bright beyond the Bell, it was undeniably Kelly Kapowski who transitioned pretty seamlessly into 90210 and kept her career going for a while there, before becoming cougar she is today.  But I’m sure one or more of them will make some sort of cameo or guest appearances throughout the show, as awkward and cringey as they might be.

But as for the supposed plot itself, it definitely sounds like it’s going to be something alright.  Slacker governor Zack Morris has closed too many underperforming high schools, which is basically going to be code for the black schools and the heavily Hispanic schools, and his solution is to just funnel them all into schools like Bayside and presumably Valley, with no obvious thought to logistics, districting, or any other minute details that typically are involved with rezoning entire schools.

Obviously, this is the recipe for a low-key Dangerous Minds type of storytelling, where the minorities and the white kids of Bayside are going to learn and teach each other about their stark differences despite the fact that they’re all collectively from southern California.  But like its predecessor, I’m sure the show will touch on some timeless topics such as racism and drug use, and inevitably some time-relevant things like social media bullying and probably a very special episode on dealing with a school shooting threat.  Maybe not the latter, but that would definitely get some attention if they tried.

Either way, my knee-jerk reaction is that of dread, disappointment and a wince that SBTB is getting the reboot treatment, mostly because it was a show that I really liked a lot growing up.  I never like seeing shows from my childhood get the reboot treatment, because they’re inevitably always kind of cringey in some way shape or form.  But at the same time, in spite of all the criticism I’m giving it, there’s a very high possibility that I’ll at least watch the first season of it; pirated, because I don’t believe in paying for NBC, much like I wouldn’t pay for CBS’s ridiculous paywall, and most other basic cable networks that think they have the clout to charge people for mediocre content.