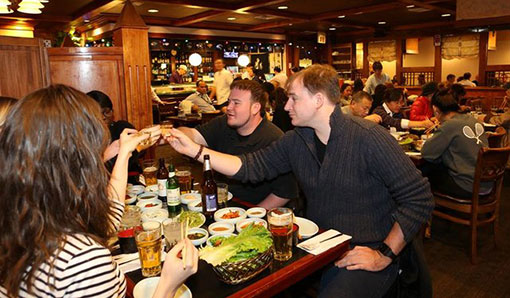 Over the weekend, mythical wife and I went up to Virginia to visit my family, as we had some pretty important news to tell them.  Since good Korean food outside of the litany of all-you-can-eat KBBQs are pretty few and far between without having to drive some distance, we decided to meet up with my family at a Korean restaurant in Annandale, which anyone with any knowledge of Northern Virginia is astutely aware is very much, the Korean part of town.

Or so I thought.

Clearly, things have changed a great deal throughout the years, most notably the fact that Korean food is very much en vogue and extremely popular these days.  The restaurant that my family and I went to was slam packed when we got there, and the vast majority of the diners in the restaurant were very much not Korean.

I had fond memories of this place from when I was younger and still living at home; for one, my parents were still together, but I remember how the place was much smaller, very much more rustic, with a décor that was definitely trying to lean old country, with rice papered walls.  Everyone in the restaurant was Korean, and the atmosphere and ambiance was much more relaxed and slow paced, and the soondooboo jjigae was scalding hot, and the absolute most perfect food on the planet to eat on a winter’s night.

When I suggested the restaurant, my mom questioned me if I was sure if this was the place I wanted to go, saying it was always slammed, and that there always a wait.  I didn’t realize we were talking about the same place, but clearly as she still lives in the area, has witnessed the PF Chang-ification of not just this particular restaurant, but presumably the rest of Annandale, as Korean food began to catch the imaginations of all sorts of white people who love to claim to be adventurous eaters, and relished at the thought of being the pioneers amongst their peers to delve into the worlds of all this oriental food.

Needless to say, when we pulled up to the restaurant, I was at first a little surprised at how the place was now substantially larger than it was the last time I was there, and the parking lot was three times larger, and just about every single spot was taken.  It’s actually amazing that the two cars we had were able to find spaces.  But upon going inside, it was another surprise to me to see just how slam packed the place was, and with the vast majority of diners, most definitely not Korean.  This was very much a shocking contrast to my last memories of this place.

Fortunately, the wait for my family wasn’t that bad, as they were at least still willing to treat a mostly Korean party like everyone else and seat us the same, which is unfortunately not always the case with Asian businesses that have been PF Chang-ified; meaning the Asians that run the joint go all Uncle Tom and give preferential treatment to white people, and treat their countrymen like second-rate.  Had I gotten any whiff of PF Chang-ized attitude, I would’ve gone ballistic and immediately suggested we go somewhere else, but the reality is that if this place was now crawling with Thrillists and Yelpers, then all of the other little spots that I used to go to when I lived in the area would probably all be the same.

Thankfully, there was an agenda that superseded the necessity of an ideal location.  My family was quite surprised and happy with the news we had to share with them, exceeding my expectations that they probably suspected something was up, considering we don’t often visit, much less try and bring my entire family together like this.  In spite of the general PF Chang-ification of the restaurant, the food was still excellent quality, and I was able to get some really awesome yeu-ggae-jjang that definitely made me sweat out the heat.

But after dinner, and looking back at the restaurant itself, I simply couldn’t get over just how invaded Annandale seems to have become, and it makes me wonder if all of the more traditional Korean restaurants in the Northern Virginia area have all seen the same fate?  I mean, I’m all for the popularization of Korean food, because frankly there’s no genre better to have come out of Asia, but at the same time, it’s a little obnoxious to know that my culture’s restaurants are kind of in this elevated tourist status.

Yes, I’m sure the business owners love and relish the idea that they’re popular with non-Koreans, which is more important to appealing to snobs like me, but I guess there’s a selfish part of me that seeks out some degree of authenticity and immersive environment, that I’d like to know that there are still places to retreat to where English is a struggle, and the food couldn’t be more authentic even if it came out of the Eastern Hemisphere.  It’s weird to think that Asiandale is now accepted and popular with white folks now, and hopefully it doesn’t backfire on me the next time I’m up there and pining for some good Korean food and it becomes a struggle.