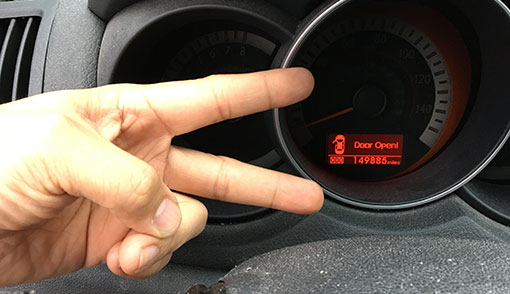 After nearly ten full years, I’ve said goodbye to my Kia Forte.  It’s still a little bittersweet at the time I’m writing this, in spite of the excitement of having a new car after nearly ten years.  But with a sliver under 150,000 miles, degrading brakes, a baby on the way, and just the fact that I simply wanted a new, larger vehicle, I felt that the time was right for me to make a switch.

I wanted to capitalize on being in a position to where I had the luxury of time to do research, test drive multiple cars, and play a little bit of negotiation, as well as have the ability to sit on the bench and wait things out if things weren’t looking promising.  I wasn’t as fortunate the last time I was in the market for a car, but things still worked out well for me, seeing as how it was then in which I drove off in my Forte, and it served me extremely well over the last 9+ years.

But the point of this entire post was that I wanted to give an appropriate swan song for my former car, because throughout their entire existence, Kia has often been perceived as a below-average car manufacturer, but seeing as how I just traded in one that had nearly 150,000 miles on it, never had any mechanical problems, and where I did pretty much no maintenance other than oil changes and new tires whenever they were needed, I can confidently vouch for the quality of Kia cars, and can proudly say that I owned one for the better part of a decade.

When I was in the market last, I was in a pretty bad situation.  I had a lemon of a Mazda that I still owed money on, but I was fed up to hell repairing it and willing to punt on the rest of the financing just to be free of it and have a car that was just plain reliable.  I wasn’t working full-time and was still in my life of freelance, so I couldn’t afford to get something that I’d risk being unable to pay the financing on it, so I had to accept the fact that I probably wouldn’t be getting a dream car or anything of the such this time around, and that I just needed something that could be relied upon.

The Ford Fiesta was actually my top pick going into my search back then, but I told myself to drive anything and everything that was in my limited budget, and put aside all previous stereotypes and perceptions, and think of the greater good of getting a reliable car.  I took a weekend day to go to a part of town that had a large number of dealerships, and I went on a spree test driving cars.  Toyota Corolla, Honda Civic, Hyundai Elantra, Chevy Cobalt, whatever was a compact car that I could make the numbers work.

Eventually, I found a Ford dealership that had a Fiesta that was also a stick shift, and I looked forward to getting in and taking it for a whirl.  But from the moment I sat down, my expectations were immediately souring.  The seats felt small and cheap, and the interior was cheap-looking, plasticky, and everything I touched from the console to the door handle felt shoddy and sub-par.  When I took the car off the lot, I shift from feel and sound, and I realized that I was revving to like 5,500 rpm before shifting, because the car just had no power and needed that much juice in order to get moving.  There was a lot of body roll, and the brakes felt soft and uninspired, and frankly I was ready to get the fuck off the lot when I was done with this.

Disappointed, I eventually found my way to a Kia dealership, and frankly I didn’t even know what they even had in their lineup that fit into my criteria of price, fuel economy, and limited options that I was hoping to get.  Upon a cursory walkthrough, the Forte seemed to fit the bill, so I asked if I could test drive one.

From the moment I sat in the driver’s seat, I remember having a very surprised moment, at simply how good it felt.  The seat was comfortable and there was spacious head room.  Firing up the car and pulling out of the lot, there was surprising power coming from the motor, and the handling felt responsive and confident.  The acceleration was good, and the brakes felt inspiring.  I remember leaving the dealership in a mild state of surprise at just how blown away I felt by the quality of the Forte.

Admittedly, one of the things that I had to overcome before I decided to go with the Forte, was the silly preconceived notion that I would be driving a [whisper]Kia.  The joke of the automotive industry, the manufacturer that everyone loved to dunk on.  Why would I want to get one of those cars?

But eventually common sense prevailed: after all the cars that I test drove, there was no denying the Forte was the unmistakable winner.  It had the most power, comparable gas mileage, and because Kia always has to overcome the prejudices of people, they have to load their vehicles up with all sorts of extras in order to sway people to realize how good they are; satellite radio, leather heated seats, Bluetooth connectivity; and keep in mind, a lot of shit was not the standard like it is today, ten years ago; and all within a price point that I was capable of handling.

And so I became a Kia driver.  At first, I did have a little hesitation whenever people wanted to know what kind of car I drove and I’d say “Kia,” but as time went on, and I realized just how great my car was, that stigma melted away.  I still got to have fun whenever I wanted to feel Initial D-ey with my Forte, because it was a 6-speed manual transmission with 184 horsepower, and it had a really stiff suspension and good brakes, but I also got 33+ miles to the gallon whenever I hit the road.  And when I effortlessly slid a 27” tube television into the back of the car, I realized that I never wanted to have a car that wasn’t a hatchback ever again.

I took care of my Kia, by not driving it like an idiot; I took it easy over speed bumps and rough curbs, I rarely turned the wheel to its maximum limit and strained the boots and shocks, and I always made sure the tires were well inflated.  Even at the very end, it was still on its original clutch, 149,892 miles, and it was after like eight years, did I have to do brake work on it for the very first time.  And in turn, my Kia took care of me, by remaining reliable and trustworthy for nearly an entire decade.

But as much as I loved my Kia Forte, time keeps flowing and life moves on.  I realized that I was in a good enough position financially, and the Kia hadn’t hit a ludicrous amount of miles that my Nissan in the past hit, to where I might be able to get a decent trade-in back for it, to pursue a new car.  The brakes were just now finally starting to wear down, and now seemed as good as time as any to seek change, before I could be on the hook for nearly a grand in order to get a ten-year old back to standard braking ability.

And I simply just wanted a change; combined with the impending baby coming, all the stars lined up perfectly to where it made perfect sense to trade in my Kia and get a new car.

As exciting as it is to have a new car now, as I’ve stated, it’s bittersweet having said goodbye to my old Kia Forte.  It truly was an excellent vehicle in the time I had it, and I have zero regrets with it.  It was extremely low-maintenance, and never had any major mechanical issues in the 9+ years I owned it.  At one point, a coolant hose degraded, but it was covered by Kia’s standard super-warranty, and it cost me nothing but time in order to have repaired on their dime, and never was an issue again.  Otherwise, all I did was oil and tire changes throughout my ownership, and I never once bothered doing any sort of 50K, 90K or any other arbitrary maintenance milestones, because I think they’re bullshit, and the quality of the car made sure that ignoring them didn’t bite me in the ass.

Kia is a truly quality car manufacturer, and anyone who doesn’t agree probably owned one before 2008 prior to their aggressive restructuring, bought a used lemon, or has never experienced one for themselves and are just following the sheep.  I’ll miss my old Kia Forte, and I can say without hesitation that it was a truly outstanding car, and it’s legitimately debatable that it served me better than any other car, along with my old SR20 Nissan Sentra that I put 226,000 miles on.