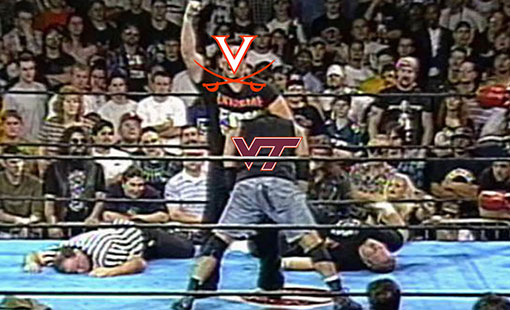 Back when Extreme Championship Wrestling was still a thing, Tommy Dreamer had a feud with Raven that went on for a few years, where no matter what happened in the storylines, whenever they actually had a match against each other, Tommy Dreamer always lost.  It didn’t matter if Dreamer was in control of the entire match, or Raven would squash him, in the end, Dreamer did the job.

It wasn’t until Raven had been poached by WCW because Paul Heyman couldn’t afford to keep any of the rising stars that he had cultivated, did Tommy Dreamer actually get his long-awaited win over Raven.  And even that was mostly because it was a convenient way to write him out of the storylines because he was leaving, but the point remains it took Tommy Dreamer over two years of jobbing before he finally got a win over his long-hated rival.

Over the Thanksgiving weekend, the University of Virginia finally defeated Virginia Tech in football.  They won the Commonwealth Cup for the first time since 2003.  As I was watching the score (I don’t watch games, because teams I favor tend to always lose when I do), and it was knotted at 30-30 in the fourth quarter, I couldn’t help but have this sinking feeling that maybe this was the year where the streak had to end.  But who really knew, because over the last few years, there had been quite a few nail biters where the good guys prevailed, including an improbable OT win just a year ago.

But then I saw that UVA went up 33-30, and when it came down to the final drive, it was either going to be a soul-sucking TD win for Tech, or probably a turnover when UVA would inevitably make Hendon Hooker actually have to throw the ball if they wanted to win.  When I saw that suddenly UVA was then up 39-30, I knew what had happened without having to dig.

Anyway, for quite a while, I’ve had this analogy in mind for the day when UVA actually beat Tech.  I think it really came to mind back in like 2014, when the two teams were 5-6, and they were playing not just for the Commonwealth Cup, but for bowl eligibility, and the game was a real nail biter that came down to the closing seconds and a defensive stand by the Hokies in order to win it.  But that was the first time I finally felt like the general invincibility of Virginia Tech over UVA was no longer a given, and I couldn’t help but feel that the proverbial doomsday clock of the Hokies’ dominance was really starting to tick.

It didn’t help that aside from Fuente’s first year, Tech hadn’t really dominated UVA like they had during the Vick and Tyrod eras, and as the Hokies got worse and Frank Beamer’s last recruits went pro, players got injured or began transferring out, it couldn’t not be noticed that UVA was definitely on the rise.  Under Bronco Mendenhall, the Cavs’ win totals have gradually climbed, and as is occasionally the case, when one athletic program does well and brings in money into the school (basketball), other athletic programs passively prosper.

Either way, it’s been a long time coming, but UVA finally got their push over Tech.  It doesn’t mean that the tides have entirely changed and that it’s going to start a streak in the other direction; especially with Bryce Perkins graduating out, UVA will likely be going through the same woes as the Hokies have since Tyrod Taylor graduated – an endless search for a competent quarterback.  I’m not quite sold on Hendon Hooker, and these days there’s no guarantee anyone will stay anywhere, with transfers being as in as they are now, and he could spontaneously just decide he’s going to go transfer to like, Arizona State or USF out of the blue.

The only thing I’m really disappointed in is the fact that a Tech win would have almost guaranteed a berth in the Orange Bowl, or rather, one of the bowl games that actually has a little bit of steam behind it, because the winner of the Commonwealth Cup is all but guaranteed to get blown out by Clemson.  But at the same time, regardless of if it were UVA or Tech, they’re still going to get paired against a massive powerhouse like Alabama or Penn State in the Orange Bowl who will undoubtedly crush whomever, so I guess it’s better to end the year not getting blown out two straight, and now maybe Virginia Tech can end their season with a potentially winnable game in like the Military Bowl or Belk Bowl against an opponent that isn’t a jilted top-10 non-playoff school.