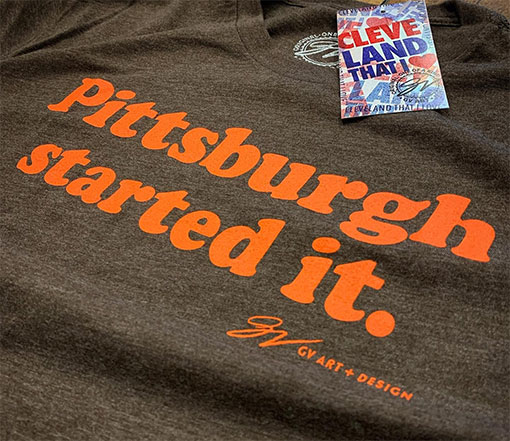 Because every gym on the planet is seemingly contractually obligated to be airing ESPN on at least one television, I saw this story about how the coach of the Cleveland Browns was spotted wearing this t-shirt that said “Pittsburgh started it,” as commentary over an incident a few weeks ago where the Browns’ Myles Garrett and the Steelers’ Mason Rudolph got into a scuffle ending with Garrett ripping Rudolph’s helmet off of him and swinging it at his head.  Garrett has been suspended indefinitely by the NFL for basically assault, and Rudolph was fined a bunch of money for remarks that supposedly started the whole incident which may or may not have been racist.

But this isn’t a post about the incident, because when the day is over, I really don’t give two shits about an organization that somehow thinks organized dog death fighting is a lesser crime than kneeling during the national anthem.   No, I’m more incensed over the fact that on the aforementioned t-shirt, is an actual signature on it from a supposed “art + design” company as if printing a t-shirt with three words in the Garfield font (Cooper Black) is remotely anything considered art or design.

This is the kind of shit that really makes me jaded towards the creative industry as a whole.  A bunch of hacks out there that take the most low-effort bullshit, slap a logo or take credit for it, and call it “design.”  And when challenged, comes a deluge of bullshit about minimalism or simplicity.  And then there’s legions of like-minded sheep who think it’s the most innovative idea in the world, and then it goes viral and people actually benefit from it.

Amazingly, the “company” that signed this shirt that I could easily plagiarize in 2 seconds, appears to be an actual company that actually makes all sorts of Cleveland-centric apparel and merch, almost all of which is 78,000% more creative and contains actual design than Pittsburgh Started It.  But because they’re an actual company, they do have the audacity to try to monetize their low-hanging fruit, and to no surprise at all, are selling these bullshit shirts for $28 a pop.  But realistically, even if it was some individual who calls themselves a studio, they’d still try to sell them for $35, because they’re broke-ass poor and trying to capitalize on going viral.

Naturally, people are buying them because they clearly have way too much money.

Either way, if I had more than 0 readers, I’m sure I’d inevitably be accused of being jealous that someone out there is making money on such a low-budget idea.  And they’d be entirely right, because I would love to make actual money on such little effort.  Why the fuck can’t something controversial and nationally known happen for an Atlanta team, that I could easily make into some sort of meme, call it design and cash in on?