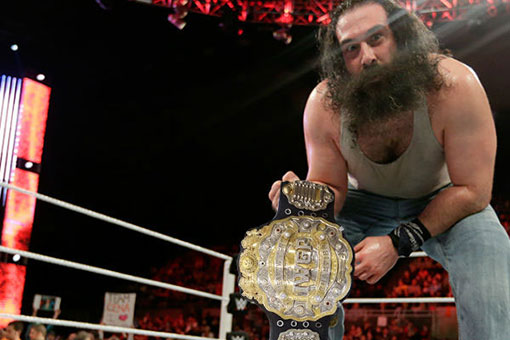 *or whatever name he chooses to go with, because the WWE probably owns the copyright the name “Luke Harper”

When news broke that the WWE had released, among several performers, Luke Harper, from their contracts, my friend and I immediately realized the destiny that was now free to become fulfilled: Luke Harper was now free to migrate over to the land of the rising sun, and begin his reign as a foreign terror, en route to a lucrative and prosperous career revitalization for New Japan Pro-Wrestling, culminating with at least one reign as the IWGP World Heavyweight Champion.

For a while now, my friend and I have always made the joke about how Luke Harper was a future IWGP champion; historically, there’s no secret that NJPW loves bringing in big white guys to push as these evil foreign heel characters for their national Japanese heroes to feud against.  And in order for the feuds to have any modicum of impact, they occasionally need to be allowed to ascend to the highest honors, so that the heroes can have lofty goals to achieve.

From guys like Vader, Scott Norton, Tyson Tomko and even Prince Albert, Japan has often times embraced the big white guy heel, pushed them to the moon so that their stars could fight them, and eventually put the faces over, and if there was ever a guy more destined to be the next great big white terror in Japan, it was Luke Harper.

Undeniably, from his time as a member of the Wyatt Family, to his less memorable singles career and then the Bludgeon Brothers, Luke Harper was a fairly unique talent, that for his size, had good mobility, good strength, but most importantly, good endurance and a general strong workrate.  He was without question the workrate guy of the Wyatt Family, and he more often than not was the carry between he and Erick Rowan.

No matter how much the wrestling business has changed throughout the decades, one thing that hasn’t changed is that true talent shines through no matter what, and even at my most casual, it was easy to tell that there was definitely talent emanating from Luke Harper.

But much like smark culture dictates, it was abundantly clear that Luke Harper really didn’t have much of a future in the WWE.  He was brought in to be the workrate guy of the Wyatt Family while the push was really destined for Bray Wyatt, especially as evidenced by the unprecedented three different career resets he’s gotten (so far).  There was a glimmer of hope with an Intercontinental championship program, but it only lasted three weeks, and then it was back to purgatory for ol’ Luke.

Now as much as I don’t like the idea of a talented guy becoming unemployed, I was kind of happy for Luke Harper when he was granted his release.  After all, he had been asking for it, so it’s not like he was future endeavored AKA fired by the WWE.  Because now Luke Harper is free to go where his talent might actually be utilized, and hopefully go where his talent is rewarded, with some notable success.

Unfortunately the chances are way higher that he emerges in AEW than NJPW; probably higher that he goes to PWG or Ring of Honor than Japan, but at least the door is now open, and hopefully Japan welcomes him with open arms.  And if and when he does cross the ocean and destroys the Bullet Club, his true destiny awaits him in the IWGP World Heavyweight Championship.