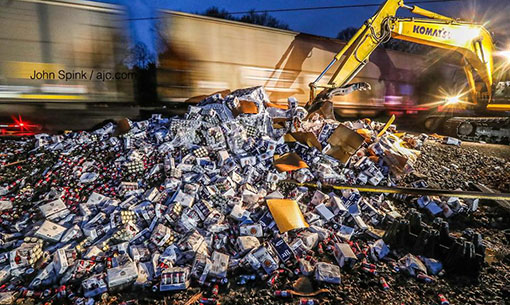 I was just thinking how I hadn’t written anything for a minute; my professional and personal lives have a tendency to get a little crowded at times, and sometimes I can’t find even five minutes for myself to just decompress and relax, much less take the time to write, no matter how important the act is to me.

But I didn’t really have to stretch real far in order to find any inspiration to write; sometimes the world just simply provides.  It’s been a while since I’d found one of these types of stories, but it doesn’t inspire me any less whenever one emerges to the forefront.

Out in McDonough, Georgia, a train collided with a cargo truck, obliterating it, and scattering its contents as far as a quarter mile.  And because it wouldn’t warrant entry into the brog without certain conditions, the truck wasn’t just any truck, but a beer truck, and the contents that were scattered as far as a quarter mile were cases and kegs of beer.

However, I would use the term “beer” loosely, because it was a MillerCoors truck, so the vast majority of the product lost was Miller Lite, along with some Old Style and Redd’s cider.  That being said, I would have to estimate that the cost of the lost product amounted to around $78, with at least $50 of it being the cost of the Redd’s, since cider is often considered a specialty beverage.

One thing the article does not mention that I’m very curious about, is that a quarter mile is a pretty long distance, when it comes to surface area for scattered cargo to go clattering around on.  As is often the case whenever it comes to shit being liberated from their confinement on the roads of America, this often times results in people who happen to be fortunate enough to be in the vicinity when shit goes free, to spontaneously turn into greedy looters who spring into action and try to get away with as much free shit as they possibly can, when pandemonium strikes.

I can’t help but imagine that all along this specific quarter mile, people are coming out of the woodwork to try and salvage whatever cans, cases and even kegs of free beer that are strewn along the side of the train tracks.  And parts of McDonough are kind of country, so I have to imagine that there are some people literally emerging from the woods, to try and get their hands on some free beer.

It also goes without saying that there were fortunately no human casualties in this incident, otherwise I’d try to practice a little decency and not try and make light of an unfortunate incident.  But the truck did get basically exploded in half, and I can’t help but wonder how trucks manage to perfectly stall out in the middle of train tracks in the first place.  Isn’t there any momentum or are the drivers actually pushing the brakes when they realize their shit is dying?

Either way, this didn’t actually occur on a highway, so it is up for debate if it’s worth adding to the veritable buffet of food lost to Georgia roads.  Which is kind of another way of saying because my shit is still offline, I don’t have the capability to search in the past to get my latest and greatest compilation list of food stuffs spilled onto the highways of Georgia to verify where it would rank on the menu, but I do definitively know that this is not even the first or second time in which a truck containing booze has been destroyed on the roads of the state.

Frankly, I’m also pretty sure this isn’t the first time that Miller Lite was “wasted” on Georgia roads.  Considering the actual beer-to-water content of the swill, I have to imagine the plant life surrounding these accident sites are pretty lush considering how watered the plants must have been after these wrecks.

But just when I felt like wanting to write about something, the world provideth.  Few things fascinate me more than the dumbassery of people doing dumb shit on the roads, and there being the collateral damage of $78 worth of MillerCoors products.