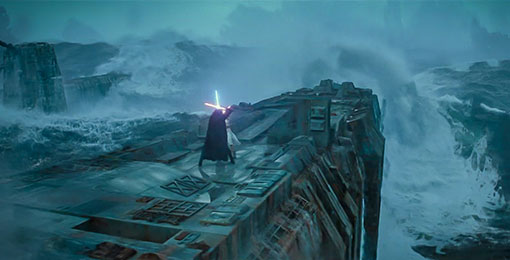 Fewer things I’ve seen over the last few years have been as divisive as the third Star Wars trilogy.  In a way it’s kind of a microcosm of today’s extremism society where people feel the need to have either completely bonkers dedicated opinions in one direction versus the other, with those of whom aren’t hard on one side are perceived as flakes and/or invalids.

Either people completely loved the series (aka loved The Last Jedi) or they hated the series (aka abhorred The Last Jedi), with there being no real space in the middle.  Fights broke out on the internet, people unfriended/unfollowed/muted/ignored others on social media, and eventually The Last Jedi became something of a topic like politics during Thanksgiving; a powder keg of a topic that’s often at the tips of everyone’s tongues, but kept quiet for the sake of the group’s collective enjoyment, but really it’s an uncomfortable armistice just to hold their mouths shut.

At the risk of being an invalid flake, I am kind of in the middle when it comes to the series.  I thought The Force Awakens was an outstanding entry into the Star Wars primary series, and I often likened it to being JJ Abrams’ love letter to the Star Wars franchise.  It introduced solid characters and laid down the groundwork for a fairly logical path to success.  In terms of comparing it to a football score, I would have said The Force Awakens was like a solid 31-7 score at halftime, in favor of the light side.

Obviously, the shit really hit the fan after The Last Jedi, directed by Rian Johnson; normally, I wouldn’t bother mentioning directors, if not for the fact that it’s Johnson himself whom is either loved or reviled by Star Wars fans across the globe, for the way he handled the series, once given the reigns to the story.  Personally, I’m definitely in the camp that’s more dislike than like, but I will still maintain that in spite of the negative outlook on The Last Jedi, I would say it was still better than the Jar-Jar Trilogy.

But there’s little denying that Rian Johnson shit the bed with The Last Jedi, twisting the storyline to some strangely asinine directions, introducing strange characters, veering existing character arcs into weird plot/relationship chasms and missing out on some really easy layups.  After such careless bumbling, the score of the game was 42-31, with the dark side scoring five consecutive shit touchdowns to take a commanding lead heading into the final period.

The funny thing was that I didn’t really realize how bad The Last Jedi truly was until watching The Rise of Skywalker, and seeing just how much digging that poor JJ Abrams had to do with the plot to kind of get it out of the hole that Rian Johnson had put the series in.  Personally, I didn’t think The Rise of Skywalker was anything short of, a pretty entertaining film, but when you factor in the notion of what the film was being hoped to accomplish given the massive deficit it was put in prior to the start of the film, then it has to be graded far more generously.

The Rise of Skywalker scrapped and clawed and scored 11 points on a field goal, plus touchdown and two, to tie the game at 42-42 in the fourth quarter, and with time ticking away, Lando Calrissian converts a 45-yard field goal to win the Star War for the light side.

Because, [SPOILER ALERT] no one character comes out nearly as squeaky clean as Lando does, who not only gets to cash in on the nostalgic character return, but he doesn’t die, doesn’t get owned like a bitch like Chewbacca does, gets to play hero, twice, and when the battle is over, basically steals sweet nubile Jannah away from Finn, and effectively is the only guy to, get the girl in the end.  Sounds like a real winner of Star Wars as far as I’m concerned.

But that’s really what The Rise of Skywalker felt like to me, a film that spent so much time digging out of the deficit its predecessor put them in, that it didn’t really have that much time to really shine for itself.  By no means was any of it the fault of JJ Abrams, but it really did put a damper on the amount of time he himself had to actually put forth his own storytelling ability, because of the pile of crap that Rian Johnson left the series in after his drive-by shitting.

Regardless, in the end, the series still ends in a positive manner, no matter how ugly the win was.  A win is still a win, no matter the path taken to get to victory, and sometimes, it’s not always the prettiest.  And with that, the third trilogy of Star Wars comes to a close, and I can’t help but wonder when a fourth trilogy will someday emerge; with old man Lucas mostly out of the picture and content to collect paychecks, it’s inevitable that in a decade or so, there will be another attempt to expand on the series for the next generation(s).  Hopefully, it’ll be a little bit cleaner than this one was.