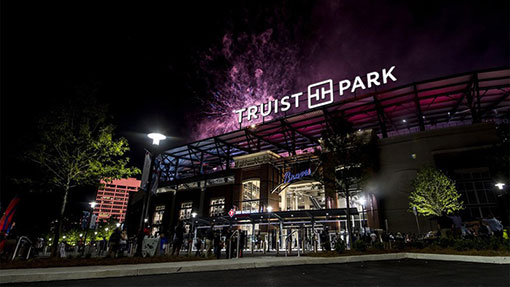 Shocker of the century: Truist Park becomes the name of the new stadium after the merger between SunTrust and BB&T

Welp, nobody saw that one coming.  And by nobody, I means every single fucking person in Atlanta with a pulse knew that it was going to be Truist Park in the end.

No matter how great it would’ve been if Waffle House swooped in and usurped the naming rights to the stadium, and called it “The Waffle House, home of the Braves.”  Or if the ballpark decided to honor the greatest power hitter of all time and called it like “Hank Aaron Field,” everyone and their mother knew it was going to end up as some soulless, corporate stooge of a name, and once it was announced that the merged bank was going to be called Truist, it was only a matter of time before this obvious news was going to be announced.

The best part is that in spite of the obvious, these corporate stiffs all took the time and resources to make an event of it, justifying the claims of obvious corporate circle jerking.  As if an unveiling was actually needed, anyone with a brain knew the name and what the logo was going to look like before any sort of curtain was ever put on a pedestal.

The sad thing is that no matter all the clowning that Citi Field got when they unveiled, Truist Park is worse.  Sure, the Citi Field logo looked like a Domino’s logo, but at least it was still somewhat attempting to look like base paths and relate to baseball.  Truist Park looks like an Epcot reject with an emblem that looks like the ominous symbol seen on the episode of Black Mirror about the White Bear.

And no clever nickname can be applied to something as lame as “Truist.”  Or ScumTrust for that matter.  Turner Field was often referred to as “the Ted” based on the original ownership, but nothing can really be applied to these bullshit corporate names.

Regardless, in spite of the dunking I want to do about Truist Park, at least when the day is over it’s no longer called SunTrust.  Despite the fact that the bank itself isn’t necessarily dead, the lack of identity helps mask their bullshit, and I can probably stomach actually going to a game in the future once my kid gets here, and daddy wants to take his daughter to her very first baseball game.