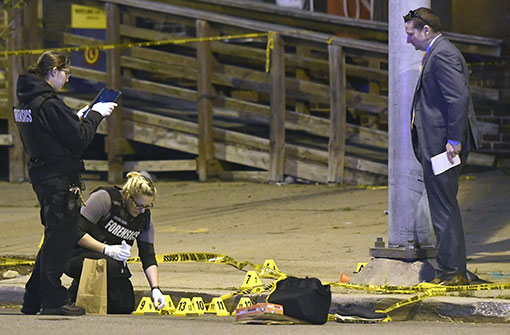 If there ever were something that would get me to take a break from brogging about the wonders of my newborn daughter, this story about the mayor of Baltimore pleading with residents to stop shooting each other, so that the beds in the local hospitals could be used for aiding those with coronavirus is a good topic to distract me.

The headline alone, is maximum Baltimore.

It’s basically the equivalent of asking a dog to not sniff butts, or a bear to not shit in the woods.  All the pleading in the world isn’t going to make a lick of difference, but it sure is funny to see someone try.  The residents of Baltimore can’t stop shooting other people as much as fish need to be in water to survive.  It’s just the laws of nature, that cannot be defied, no matter how much pleading or imploring is done in front of television cameras.

In all seriousness though, Baltimore really is kind of a sad place to me.  Basically as long as I’ve been alive, Baltimore has been a crime-ridden cesspool of a city that inexplicably gets way more credit than I can fathom why.  If anyone were to describe a place that’s riddled with endless tension and guns being fired off on a regular basis, I wouldn’t be surprised to hear Baltimore, or the North-South Korean DMZ, except the DMZ has inadvertently turned into somewhat of a sanctuary for endangered species animals.

In Baltimore, humans are the endangered species, based on how much any person’s mortality rate drops just setting foot into city limits.  Add coronavirus into the mix, and the daily survivability in Baltimore probably plummets to half of what it is throughout the rest of the world that only has to worry about coronavirus and not everyone in the city packing heat like Grand Theft Auto on hard-mode.

Anyway, I laugh about the whole situation in Baltimore but ultimately it’s still sad that such is even news.  Coronavirus really is no joke, but it’s still not stopping Baltimore from remaining at peak Baltimore, and apparently spring breakers all over Florida don’t seem to care about getting sick, because they’ve prioritized their need to party like idiots over the general safety of themselves and their fellow persons.

The world really is kind of fucked, if these are the people that are allowed to remain in existence.