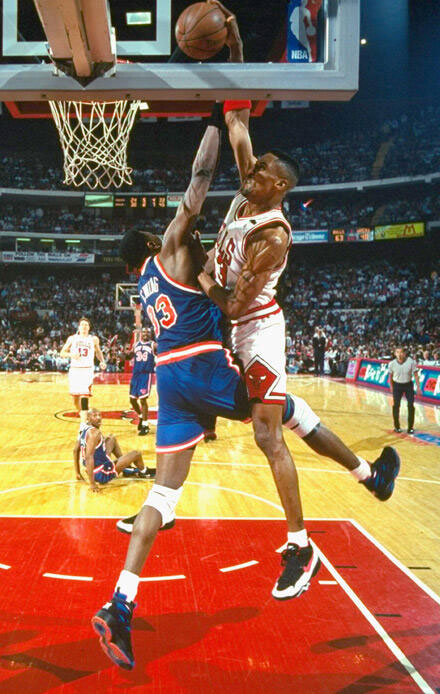 To think that when Patrick Ewing had to deal with the renewed spotlight of how much Michael Jordan and the Chicago Bulls owned him over and over again throughout his career thanks to ESPN’s The Last Dance documentary, he probably didn’t imagine things could get any worse.

But then, last Friday it’s announced that he has tested positive for coronavirus.

Admittedly, I was a Knicks fan growing up and I loved the hell out of Patrick Ewing.  His jersey was the first sports jersey I’d ever gotten in my life.  I even had a poster of Patrick Ewing in my room, and I always picked the Knicks in NBA Jam.

But there’s no real way to debate the fact that throughout his career, and now his life, Patrick Ewing is just a guy that just can’t stop getting owned.

After winning a National Championship for Georgetown in 1984 (his second attempt mind you, his first try was thwarted by of course, Michael Jordan), this rest of his career is just a cautionary montage of him getting owned over and over again.  Drafted first overall by the New York Knicks in 1985, Ewing definitely revitalized the franchise and the Knicks were almost never not relevant in the playoff picture throughout his entire time on the squad, but the unfortunate fate was that Ewing and the Knicks never won a championship.

They came close in 1994, but Hakeem Olajuwon was just one of numerous guys to own Ewing in their careers, with the Houston Rockets winning a championship in seven games against the Knicks.  Sure, there’s a laundry list of guys who have made Patrick Ewing their personal highlights in their careers, and pretty much anyone who could dunk a basketball dunked on Ewing at some point in their careers, but when it comes to ownage on Ewing, the obvious main villain in his life was none other than Michael Jordan.

Now I’ve written in the past about how much MJ owned Ewing, and how it never seemed to end, even long after their playing careers ended.  It’s bad enough MJ owned Ewing on the court in both college and pros, but then Jordan would continue to torment Ewing’s life afterward, denying him coaching jobs as well as making sure Ewing’s ineptitude was featured on The Last Dance.

But coronavirus?  No way MJ had anything to do with that one… hopefully.  Either way, it doesn’t seem like much of a stretch that Patrick Ewing ended up getting it, because frankly he’s just been living a life of getting owned so much that it’s not much of a surprise that he would get it.  Sure, he’ll be fine, because he’s rich and has money and resources to get the best treatment, but it’s still scary all the same.  I wish him the best in his inevitable recovery, but there’s no denying that when it comes to getting owned, Patrick Ewing really is the GOAT there.