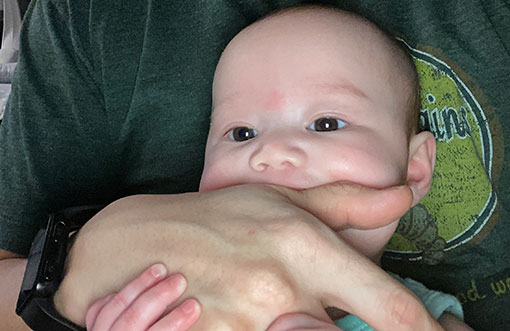 Prior to the arrival of my daughter, I read a book about new fatherhood, as well as watched a few videos and read some stuff on the internet in regards to new parenthood.  Naturally, there’s a tremendous amount of overlap when it comes to the rigors of being new parents, and they often times make it sound like the sleep deprivation and dirty diapers are the worst things since the Bubonic Plague.

I guess I’ve conditioned myself fairly well throughout the years, to where I can operate on low amounts of sleep and make do with coffee alternatively, so the sleep deprivation wasn’t nearly as hellacious as all accounts make it sound like it’s going to be, and I’ve cleaned so much poop and urine from a lifetime of having pets that poop and urine from my own offspring doesn’t seem remotely close to being disgusting or nauseating.

Needless to say, it’s tempting karma to say raising a child has been anywhere close to easy, because it most certainly has not been, but when it comes to the things that most outlets and resources cite as being the worst things in the early stages, have been basically nothing to me.

I guess I should’ve started reading more books about once the baby has come home, and the things that start to happen after the third of fourth months, because I feel like now, we’re getting to the stage where I’m beginning to become frazzled and unglued at times, because I frankly am not always handling the pressures of trying to placate a wailing baby in the best manners.

Long story short, I didn’t know about sleep regression, and I didn’t really prepare myself to the rigors of teething.  And when they’re hitting simultaneously, resulting in a screaming baby that is in pain and won’t nap, and then they stay up past their nap time and hit their next feeding window and then they’re overtired and mixing in wailing about that and won’t go to sleep and we can’t put her to sleep because then she’ll never be able to go back to sleep when we get to her actual bed time; that’s where I feel like I need to have an arm that’s twelve feet long, because that’s about as much of wrist I want to slit when the shit hits the fan sometimes.

Seriously, I don’t know what’s worse between sleep regression and teething, but I definitely know it’s hell on earth when the ailments of both hit at the same time, and that’s been happening at least once a day over the last week or so, leaving me feeling completely defeated, fried and a failure of a parent, at my inability to calm and soothe my infant.

But the sleep regression has been a rude awakening, because the tricks and methods I’d used in prior weeks that seemed to work with good success at soothing my child to dreamland, just inexplicably stopped working and in fact became a stimulant, and that was when my wife introduced me to the concept of sleep regression.  Suddenly, I’m needing to figure out how to reinvent the wheel and get my child to sleep all over again, and just when I think I’m hitting a groove, she up and changes all the win conditions, and we’re back to me feeling like a failure of a dad all over again.

And now, teething has come into play, and obviously as all of us human beings have teeth, it is something we knew was going to come into play at some point, but little did I know that it would routinely cause this much agony to a 14 lb. baby on such a regular basis.  Naturally as most of us have no lucid memories of our lives at 4-5 months, we’ll never remember the pain and suffering of teeth coming in, but we sure as shit can experience the pain of watching our offspring go through it, and let me tell you, it’s probably among the worst things a new parent can be experiencing, if they don’t know it’s coming.

Teething aides only help for so long, and ultimately the only thing that really helps is to hold my child and physically snuggle her and give her full-body physical comfort, and weather the storm until the pain subsides, and/or she tires herself out from crying over the pain so much that she effectively passes out like Steve Austin did to Bret Hart’s sharpshooter at Wrestlemania 13.

As I alluded to, there are times in which I’m not handling the failure very well.  In spite of my frustration frying my head at times, I’m never so much angry at my child one iota for not being able to fall asleep as much as I just feel like a failure of a parent at being incapable of soothing my child to sleep or take away her pain.  I often times try to will or mantra myself into a calmer state when things go nuclear, because there’s little productivity when I’m as frazzled as my kid is, and frankly I wouldn’t be able to write so candidly about it if I didn’t adapt and learn quickly to accept the need for changes and pivots at the drop of a hat during her growth.

I feel like a shithead whenever I have gotten overheated by failure, and then I’m guilty and disappointed at myself for getting to those points, and I have to wonder if I’m the only new dad who goes through this, and I’d like to wager to hope that I’m not.

Fortunately, I can fairly confidently say that the last two days prior to me writing this have gone better in Wonderland, and in spite of some nuclear episodes, I’d maintained a cooler head, and figured out ways to weather the storms and get my child to resting sooner rather than not at all.

Otherwise, paternity leave has been pretty good so far.  Ironically, in spite of the fact that I don’t have to go into any virtual meetings, or be a slave to Outlook, I seem to have less time than I did prior to paternity leave, mostly on account of the fact that mythical wife’s work year has started, and she’s often working so hard after her work day is over, that I’m on baby duty for more like 16 hours a day instead of having a second pair of hands when she gets home.

Regardless, things are going pretty okay for me, and I wish I could say the same for mythical wife, but she’s currently living the life of playing dodgeball, as certain counties in Georgia are under national scrutiny right now, being some of the only places in the country that are actually sending kids and personnel to school on a daily basis and are shocked (read: shocked) that coronavirus cases appear to be spiking.

I’ve said my piece in regards to that situation, but it doesn’t make it any less sad that the state and federal levels are basically putting Americans deliberately into harm’s way, and are just waiting on human casualties to begin emerging before they actually decide to do the right thing.  But that’s deviating from the subject matter of new dad stuff, so we’ll save that angst and rage for another time.