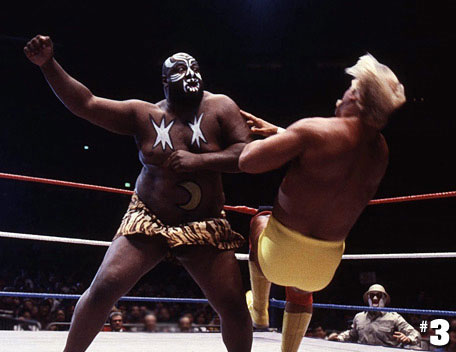 I feel that I needed to clarify the disambiguation, because given the fact that the name “Kamala” is exploding the internet right now as Senator Kamala Harris has been formally tapped to be Joe Biden’s VP running mate, there has been an ironically cringey overlap between she, and James “Kamala” Harris, the professional wrestler who has just recently passed away.

When mythical wife stated to me that “some wrestler died,” I quickly did a Google search to see that it was Kamala who had passed away.  I’ll be honest, Kamala “The Ugandan Giant” wasn’t necessarily a guy I cared a tremendous amount, as I always thought he was more of a racist caricature of a character.  And given the fact that he was 70 years old at his passing, it was one of those moments of insensitivity that I felt where at least he lived to see 70, and wasn’t a guy who was found dead in a hotel bathroom from an overdose or heart explosion from a lifetime of steroids and painkillers.

But then as a little time passed, and it was revealed that Kamala had passed away, basically because of coronavirus, then I winced and felt guilty for no-selling the news of his passing, because now it wasn’t so much a passing because a guy had lived out his life, as much as it was a guy having what remaining life he had left to live, stripped away from him, on account of an extremely preventable sickness that shouldn’t been neutralized like three months ago, and now that’s something to be sad about.

As I said, Kamala wasn’t tremendously important to me, growing up as a wrestling fan, but even I knew that Kamala was a guy who’s career transcended three decades in the industry, and has rubbed shoulders with countless industry legends in the process.  In the 80’s he feuded with Hulk Hogan, in the 90’s he feuded with the Undertaker, and he even came back in the early 2000’s to still take some bumps and put over the then-current generation of performers.

In fact, it was actually in 2005 when I probably came the closest to marking out for Kamala, when on an episode of RAW, he got into an altercation with Umaga, who was being pushed pretty hard as a bruising heel at the time, and there was a segment where the husky Samoan and the husky Ugandan were up in each other’s faces, and I was like “oh shit, this is really happening!”  They would have a match where Kamala more or less got squashed, but I can admit that for about five minutes, Kamala was pretty much the baddest guy in the industry when he stood toe-to-toe with the WWE’s top heel for a brief match.

Rarely is a loss of life is ever not sad, and the wrestling industry loves to throw around the title of “legend” to all sorts of former professional wrestlers, as long as they didn’t burn bridges with the biggest promoters.  Like, I’d seen Marty Jannetty being called a legend; the guy’s career’s legacy is being the guy Shawn Michaels smashed through a window, and now he’s more known for wanting to bang his own daughter and admitting to murder on social media.  He’s definitely no fucking legend.

Let’s make it clear that in spite of my own personal ambivalence towards the character of Kamala, he is, undoubtedly a legend.  His career transcended decades, he had feuds with legitimately some of the biggest names in the industry, and had a character that basically proved that black don’t crack, as when he showed up in 2005 looking basically the same as he did in 1985.

Despite living to 70, the man frankly should have kept living, but ‘Murica being what it is today, even the Ugandan Giant from Deepest, Darkest Africa was in the prime age of susceptibility, and unfortunately the business and the world lost a life that should very well have been preventable, which is the saddest part of all of this.