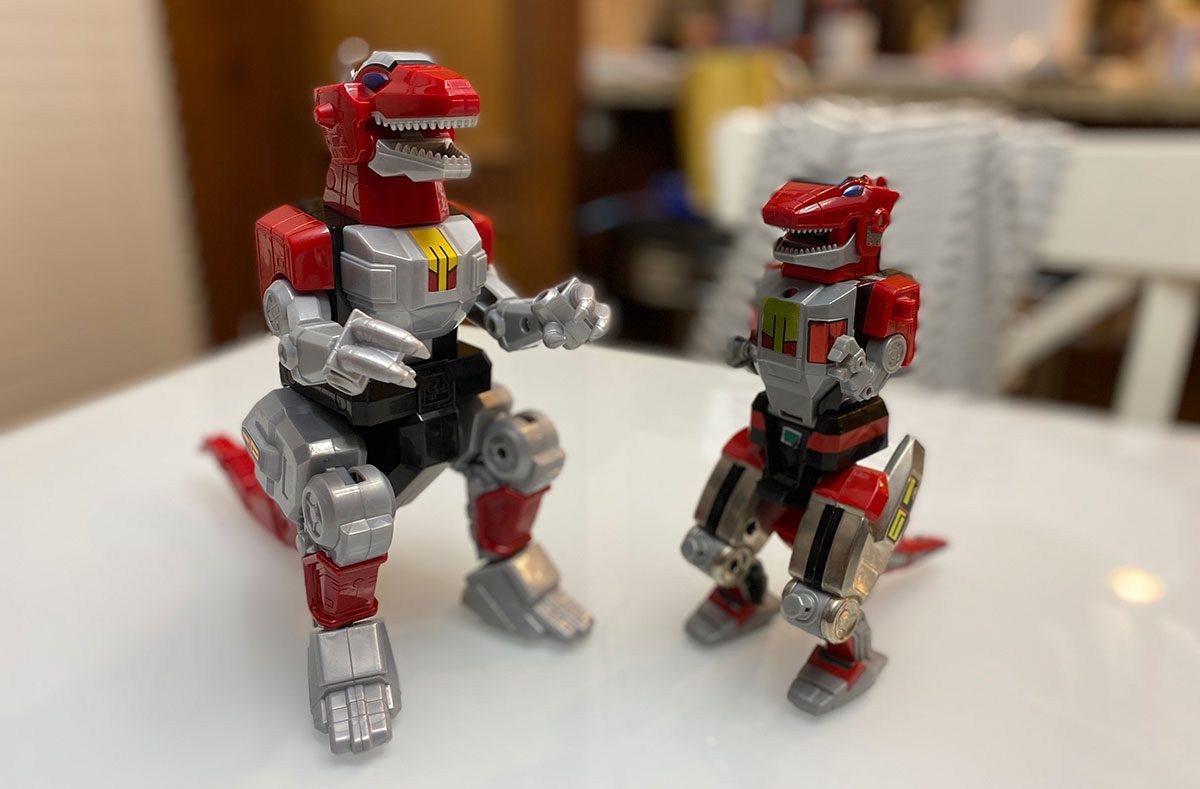 I have a hard time answering whenever anyone asks what I want for my birthday/Christmas.  For those people whom I do exchange gifts with, I imagine it’s extremely aggravating having to shop for me; shit I aggravate the piss out of myself whenever I want to do my own recreational for-me shopping, so I know this is fact.

So back in April, when my sister asked what I wanted for my birthday, I actually had an answer for her: I wanted a Tyrannosaurus Rex Dinozord that I’d seen existed.

I am nearly a 40-year old man, and I wanted a toy back from my grade school days.  Like when I got my DragonZord figure a few years back, and ultimately my MegaZord a few years after that.

Anyway, the issue with this is that the price of this particular toy remake is that the price has a tendency to fluctuate, as it seems to be available in only places that are not the United States as if America needed any more reasons why I’m beginning to think we suck on a daily basis.  During the holidays, I’d seen it dip down into the $50s, but at around April, $100 was the typical going rate.  I implored my sister to keep watch and she basically told me to keep watch and let her know if the price dipped to something more reasonable.

Long story short, it dipped down to $65, and my sister pulled the trigger on it.  However, this also coincided with the biggest spike of coronavirus across the fucking planet and the seller was in Japan and explained that JapanPost was no longer sending to the US for the time being, so that the shipping would be on hold indefinitely.  But as I am nearly a 40-year old man with no rush on when this toy should arrive, I told my sister to hold out and wait it out.

That was back in April.  Needless to say, after like July it seemed pretty obvious what was happening; the seller was making shit up to get my sister to refund and cancel the order, so that the guy could relist the toy back up to $110, where it seems to have spiked back up.  If it were up to me, I’d have held true and maybe gotten Amazon involved to see if they could strongarm the dick in Japan to pony up, but my sister is not me, and she instead just got the refund and gave me a $65 gift card.

Slightly dejected at not getting my tyrannosaurus Dinozord, I went on eBay to see if I could test my luck.  And lo and behold, I found some figurine collector in France who was selling the same toy, brand new, for $50~.  And to sweeten the pot, I had just gotten an email from eBay to congratulate me on being an OG member back from 1999, and they gave me a $25 coupon code, so now I was in a position where I couldn’t not buy this thing.

Anyway, my T-Rex dinozord arrived today, and I’m quite pleased.  It’s amazing the lengths and money I expend in order to acquire things that ultimately just end up sitting dormant on shelves or walls, but damn it, they make me happy.

But the best part about this new toy, was the evident ability to compare it to the old toy. 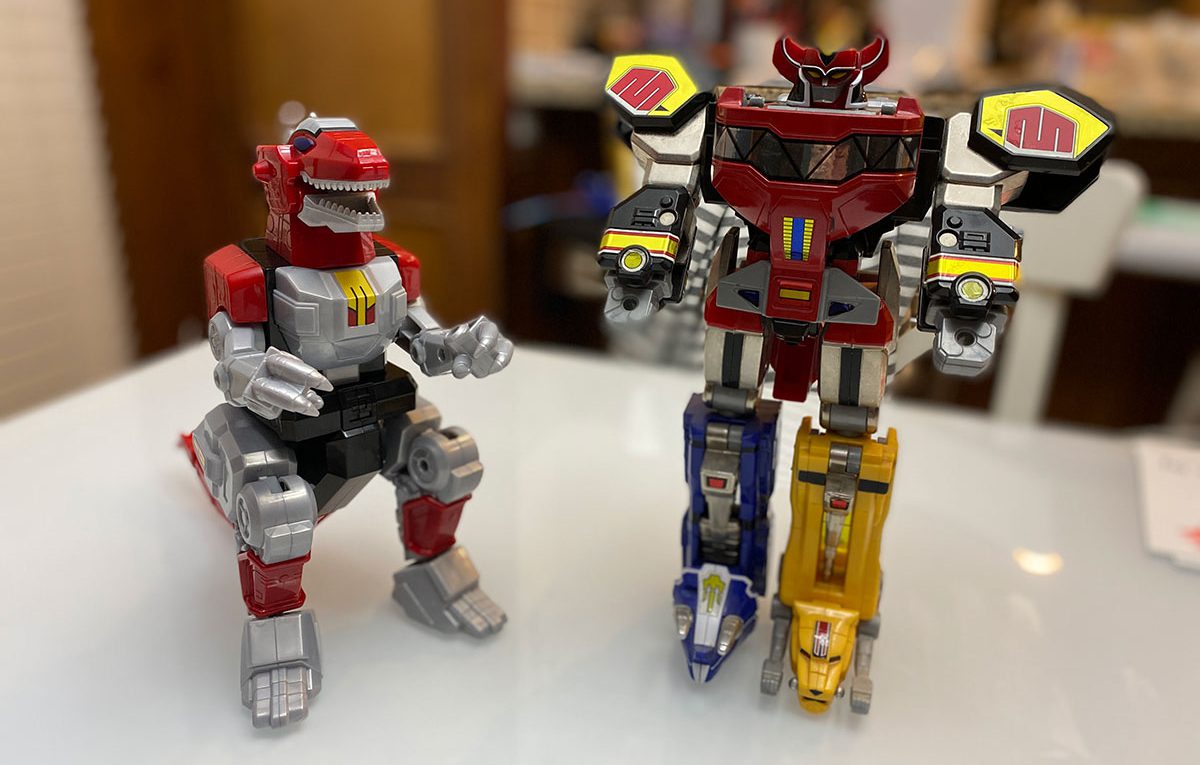 Back when I got my MegaZord, I took great delight in playing with it, breaking it down into the five OG zords, and reconstructing MegaZord along with DragonZord Battle Mode and all other configurations available to me now that I had both MegaZord and DragonZord.

Back in the day, I used to really enjoy the Zord fights where the Power Rangers would go into DragonZord Battle Mode, because it meant that T-Rex could fight independently.  Granted, as was often times the case with 80% of Zord fights, the monster would beat their asses for another two minutes before the Power Rangers decide to say fuck it, summon Titanus, go Ultra MegaZord and blast the monster to smithereens, but I always loved the idea of T-Rex getting an opportunity to shine on its own. 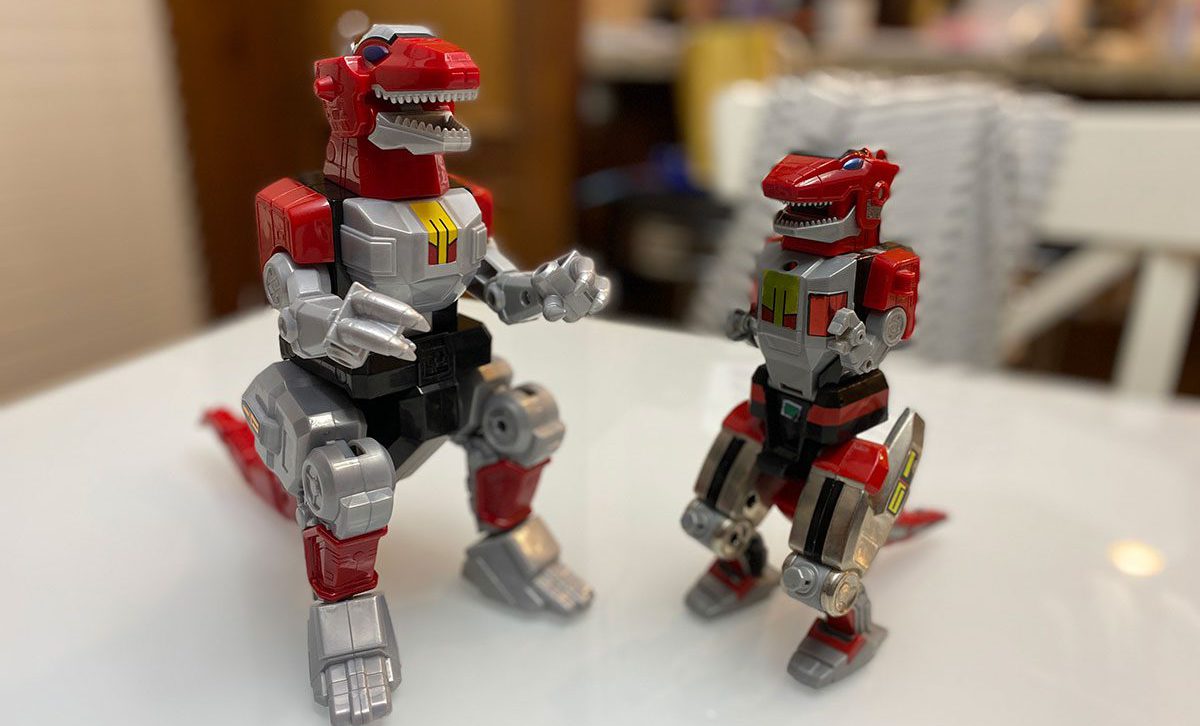 But one of the things that I remember standing out was that when all split apart, the original T-Rex DinoZord couldn’t have been more pathetic and sad on its own.  It was painfully evident that in the grand spectrum of the MegaZord toy, the T-Rex wasn’t really meant to be played with independently, and served primarily as to be the base in which all the other Zords connected to in order to construct MegaZord.

Putting DragonZord Battle Mode together, the original iteration of the T-Rex looks like the special needs little brother that wants to play basketball with the varsity squad but they’re not a team of nice guys that will talk all the opponents and refs into standing down for 20 seconds for him to shoot an uncontested three.  Original T-Rex is a sad shell of a toy Zord, that has actual literal dinosaur arms that couldn’t scratch the other arm, much less fight off the forces of Rita Repulsa or Goldar.

Standing it next to the new, stand-alone T-Rex DinoZord, and the comparison is night and day.  It’s so much superior than the old one it’s not even really funny.  Actually it is, but that’s the expression.  The best part is that the new T-Rex DinoZord, I’m pretty sure it has more points of articulation than the pile of cardboard boxes that comprised of the actual T-Rex DinoZord from the original Power Rangers show.

Anyway, I’m pleased with my new toy, and it’s proudly up on my shelf to stand vigilantly over my living room until the end of time.  And it’s on the top shelf, so that hopefully my young child will not get the idea to climb up there any wreck my shit one day.  Wishful thinking, but I’ll enjoy it while I can.