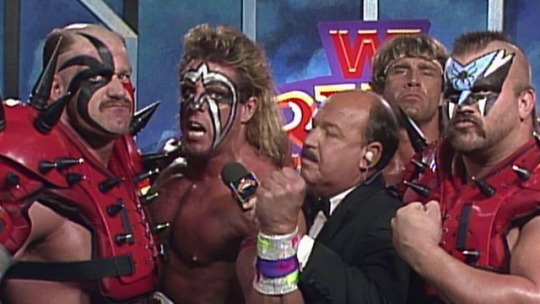 The end of the road for this warrior: legendary tag team wrestler, Joe “Animal” Laurenaitis passes away at the age of 60

Here’s a big oof moment – when looking for a picture to use for this post, I came across this particular image from Survivor Series 1990, and realized that now, every single person in this particular promo was dead.  Kerry Von Erich, Road Warrior Hawk, the Ultimate Warrior, “Mean” Gene Okerlund, and now, Road Warrior Animal, all gone from mortal existence.  This particular Survivor Series was also the debut of the Undertaker, whom has just officially retired from the business after 30 years in the WWE but is otherwise alive and well.

But back to Animal, 60 is not quite an age where the royal we can say he’s gone too soon, but at the same time it’s not really an age where we can say that he lived a full life, closer to general white male in America life expectancy than not.  The cause of death hasn’t formally been revealed, but I don’t think it’s going out on a limb to assume that it was probably his heart, it was probably enlarged, and couldn’t have been helped by some of his life spent with his former tag team partner, who was a notorious partier, substance abuser, and was someone who was gone too soon, at the age of 46.

For the record, I was always more fond of Animal than I was Hawk, even though I fully understand that when the day was over, Hawk really was the stronger worker and more talented of the two.  I guess I just preferred Animal’s power game and his general aesthetic, and the single center mohawk looked cool, and not like he was prematurely balding like Hawk’s dual mohawks.  Hawk would carry matches, take the brunt of the punishment, but then make the hot tag to Animal, who came in and bulldozed opponents, before eventually putting someone up on his shoulders for the Doomsday Device, which to this day, is still one of the more legitimately devastating looking finishers in all wrestling, and there’s a reason why so few tag teams even try to replicate it today.

An interesting thing is that over the last few weeks, I’ve been gradually catching up with shows that I’ve listed as wanting to watch, and among them was Viceland’s Dark Side of the Ring and The Wrestlers.  In watching them, I’d seen a lot of stuff about guys who were in the indies at the time, and almost like déjà vu, seeing shit like Darby Allin’s time in Evolve Wrestling, getting put into a body bag full of thumbtacks and powerbombed, Isaiah Swerve Scott he was in NXT, and I’m seeing both of them doing similar things in the current on television.

However, among these shows, one of the Dark Side episodes was about the Road Warriors, and a long-retired Joe Laurenaitis was an obviously large part of the episode, discussing the deterioration of his partner Hawk, and how he basically killed himself throughout a life of hard living and life on the road.  And then weeks later, the clock came ticking for Animal, and here we are, in a world where both of the Road Warriors have officially made it to the end of the road.

As I often do for any wrestler or wrestling personality that kicks the bucket, one of my favorite memories of Animal wasn’t a Road Warriors match, or a Legion of Doom match.  As easy as it would cite his involvement in the infamous Sid breaking his leg match, which most people tend to forget that a masked Animal was slated to be the reason for Sid’s defeat, because Sid, snapped his leg like a twig, leading Animal to have to deliver a stiff shot to a guy who’s leg was being held on by a wrestling boot, it’s not that either.

It was actually a fairly innocuous episode of Sunday Night Heat, where Animal was going at it alone, getting a European Championship match against D’lo Brown.  I thought it was the coolest thing in the world that the one half of LOD that I actually liked, was actually getting a singles title opportunity, and because I’m a weirdo who favors the low/mid-card titles, I was marking out over the idea of Animal potentially being European Champion.

Unfortunately, this was during the awkward storyline of dragging Hawk’s substance abuse problems onto the screen, and an inebriated Hawk screwed things up for Animal, leading to intervention from Mark Henry, which led to a Dusty finish schmozz of screen time, and there was no actual match.

Either way, let’s all us wrestling fans, pour one out for Animal, because there’s no denying the impact on the industry that the Road Warriors/Legion of Doom had on business, and to no short order without the contributions of Animal.