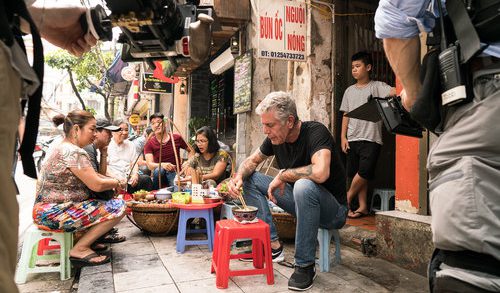 Every now and then while scrolling through theFacebook, I occasionally get a glimpse of someone posting some picture of Anthony Bourdain with some evocative quote he said at some point during his living life, probably from one of the television shows he hosted throughout his career.  Don’t get me wrong, a lot of the things he was paid to say on television were pretty good things and sounded pretty inspirational, but when the day is over, what perplexes me is why people hold him in such high regard still – last time I checked, the guy committed suicide; I’m not entirely sure that I’d want to take any sort of influence from him anymore.

If it’s something I haven’t said before, I personally don’t really have a lot of respect or sympathy for those who kill themselves; sure, every case is different, any maybe some people have such miserable lives that suicide is somewhat of a mercy, but in the cases like celebrities like Anthony Bourdain, who had celebrity, had money, influence, access and basically the easy life, all I can really do is shake my head and tilt my head like a confused dog at notion that their lives were so difficult and nobody understood them that they somehow rationalize that the only logical thing for them to do next is to kill themselves.

That being said, I’m often wondering why people still hold him, or at least the shit he’s said to such reverence as it’s done to this day?  Not that I had a tremendous amount of respect for some celebrity whose shows I never watched, but I didn’t really have any opinions against the guy, until I heard that he hung himself.  All I really wanted to ask was if his life were really that tormented and baseless that the only possible next step was to leave it?

It then got me thinking about the finale to The Good Place.  And as much respect and admiration I have for Mike Schur for having created Parks & Recreation, I did enjoy The Good Place, but the ending really got me thinking about the metaphorical implications of the finale, especially in comparison to the topic before.  Requisite spoiler warning ahead:

I begin to think that celebrities that kill themselves reach points in their lives where they accumulate wealth and a degree of success and power to where their lives become simple.  Like Bourdain for example, he’s all rich, gets to travel the world on the company’s dime, but basically has no real concerns or obligations.  He could stop being a television personality at the drop of a hat, and actually spend the rest of his life wandering the entire planet without needing to worry about bills being paid or there will be any financial or social consequences for his actions.

Basically, he becomes one of the guys on The Good Place who’s made it to the Good Place, and is living out their every fantasy, want and desire, but after some time and realizing that there’s really nothing more to live for, he decides to, leave.  But in the actual case of Bourdain, instead of walking through a grove of trees and evaporating into the post-Good Place afterlife, he just gruesomely hangs himself, and lets the world flip out over the news of his passing.

But now I’m looking back to the final episode of The Good Place, and feeling like the underlying message behind everything is that even in the afterlife, people still can find out that there’s such a thing as too much of a good thing, and their inevitable path takes them to where they leave, but leaving is basically suicide, and now I’m thinking that the ending was a little bit darker than it probably was intended.  Eleanor, Chidi and Jason eventually all want to kill themselves (beyond death), and only Tahani is the only one who finds a sense of purpose and remains in existence.

Anyway, putting a wet blanket on top of The Good Place was not my intention of writing this, as much as it was judgmental perplexion at people still holding reverence to Anthony Bourdain despite the fact that he killed himself.  As far as my opinions are concerned, here was a man who had gained such a measure of success and wealth that he basically fulfilled everything in life he wanted to do, but instead of searching for more purpose, or maybe finding some more purpose with sharing his wealth maybe, he just decides that he’s done living, and fucking kills himself.

Not that I’m the type to be posting inspirational or motivational quotes on social media, but if I ever decided to start, it sure as shit will never be from Anthony Bourdain.