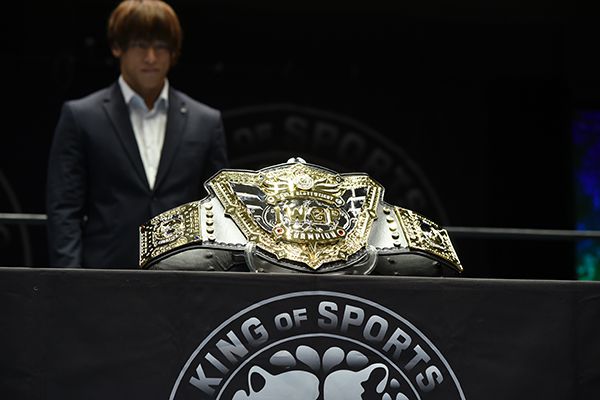 Despite my general admiration for New Japan Pro Wrestling, I don’t really follow them beyond the snippets of news that pass through my Apple News feed, or whenever a wrestling fan bigger than me brings it up on social media.  But if there is always one thing that is relevant to my interests, it’s whenever blets are brought up, regardless of what fed or promotion they might be for.

So one of the more prevalent storylines throughout NJPW over the last few months has been double champion Kota Ibushi striving to unify the IWGP World and IWGP Intercontinental championships.  I actually give NJPW some credit for taking this and making it into a storyline, instead of just merging them, as it created yet another solid matchup between Ibushi and Tetsuya Naito, with Naito trying to “rescue” the Intercontinental championship from unification, only to fall short in his efforts to strip it away from Ibushi.

With Naito vanquished, the path to unification was clear, and the above blet is the ensuing result.

I’ve definitely seen worse blet designs in my life, but my first impression when I saw the new, unified IWGP World Championship blet, was definitely, a WTF face.   The center plate basically looks like a Phoenix emblem from X-Men comics, and as a belt, it just looks really imbalanced.  I’d hate to feel what wearing that blet would be like, since the top part of the plate juts out at angles, and any sort of abdominal contracting would have them digging into your ribs.  But I guess if you’ve got the action figure-physique that someone like Kota Ibushi has, he can probably just no sell it all the same.

Aside from the design, I’ve heard that the decision to unify the blets has been mostly unpopular, due to the general history that the IWGP Intercontinental championship has carried throughout the years.  Even in the shorter time that I’ve followed NJPW, guys like Shinsuke Nakamura, El Sombra (Andrade), Tetsuya Naito and Chris Jericho were notable carriers of the belt, and much like the WWE’s IC blet, it’s one very much given to workhorse types.

Frankly, they practically have enough blets for most everyone on their entire roster to have one at this point, so shelving the intercontinental championship isn’t a bad idea, because most anyone with a brain should know that the blet will be back in the future when the pandemic is behind us, the rosters start expanding, and then they’ll have the perfect opportunity to do what NJPW does best, which is have some massive tournament, where a brand new IWGP Intercontinental champion will be crowned.

Back to the main point though, I’m not impressed with the new design of the IWGP championship.  Bootlegs as they may be, I’m glad that I have replicas of the former World and Intercontinental championships, and I most definitely wouldn’t plunk down $2,400 for a replica of this new blet.

**EDIT: it figures Kota Ibushi loses the championship in his first substantial defense after getting the new blet.  Given the fact that it changed hands to gaijin Will Ospreay, I wouldn’t have put it past New Japan to have make it some microaggression, symbolically made sure the old, prestigious blet wouldn’t be held by someone not Japanese or some weeb lifer like Kenny Omega or Scott Norton.