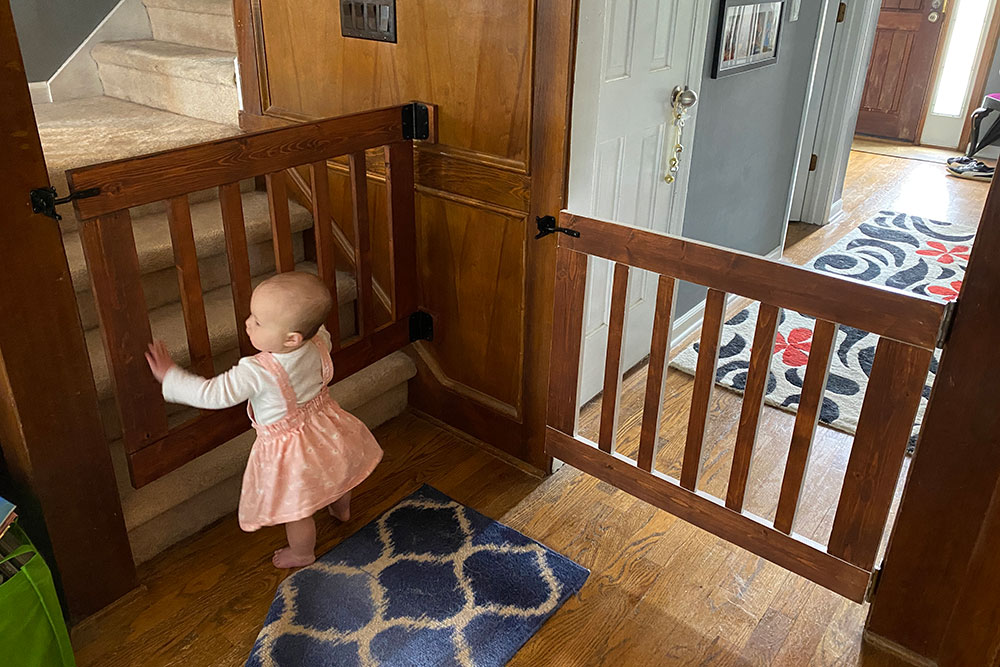 As most parents eventually need to do, mythical wife and I have gradually began baby-proofing the home as our first is completely mobile, fast as an Olympian, and is capable of being out of sight and with a dust bunny in her hand headed toward her mouth in the blink of an eye.  And the impending second child will only make the need to cordon off areas of the house that much more imperative, so we made the decision to section off parts of the home, so that we can (hopefully) be able to have to only monitor half of the home at a time instead of all of it.

The problem is, baby gates are ridiculously expensive, and considering we needed multiple gates, it seemed like something that we weren’t particularly interested in spending the money we’re already stretching thin on.  Furthermore, baby gates all have a particular cheap and plasticky look to them, and just because we’re frazzled parents doesn’t mean we have to turn our home into a giant billboard for like Fisher Price.

Mythical wife found this online tutorial from a lady who made her own baby gates from wood and gate parts, and looking through it, I’m thinking “hey I could do this,” so we made the executive decision to make our own gates.

I’m not going to get too granular with all the details, because there’s basically nothing outside of the steps the mommy in the link that I didn’t do, so if you really are curious you could support her and give her traffic, but I’m just going to kind of write out the things I did in the process, and hope that this turns into something of a substantial post that isn’t too boring.

So the objective of the DIY gate project was to have three gates, to section off the dining room, the front foyer, and the staircase.  We wanted to limit our kid(s) to the kitchen, living room and our media room, and prevent them from getting into the foyer and the dining room where all the dog stuff and the pet fountain is.

One of the main things about this, that obviously made it exponentially more challenging and resource needing, was the fact that I wanted to create gates that melded well with the general aesthetic of my home, which is a blend of white trim in certain parts of the home, combined with the wood look of other parts.  Frankly, it’s a colossal pain in the ass in some regards, but I like having two vastly different looking aesthetics depending on my mood.

Needless to say, that meant that would have to build my gates to be two-tone, where one side would mesh well with the white trim on one side, but need to look appropriate to the wood trim on the other side.  Fortunately for me, there was one gate that I was allowed to keep stained on both sides, which made it the easy one, but the other two were most certainly pains in the ass, because even the most palest wood still needs multiple coats in order to whitewash out.

So, the above photos illustrate all boards having a stained side to match* the walnut color of the wood trim in my house, but then I had to tape off and whitewash the other side to two sets of slats so that they would hopefully match the side of the gate where the trim was white.

*Just want to boast about my eye for color, as I completely blindly from memory picked a stain at Home Depot, that just so perfectly happened to match the color of the wood trim and accents in my home.

Assembling the gates was a little trickier than I had imagined, and this is where I have to say things probably would have gone way easier if I had an array of power tools that would have given me the ability to be more exacting with my measurements, because when it comes to as many slats as I was dealing with, every sixteenth of an inch matters, and even the slightest deviations between slats can result in some gapping and ill-fitting slats, that I have to unfortunately live with, because I don’t have the equipment necessary in order to make these 100% perfect.

I say all this because I like to be transparent with my processes and disclaim that everything is not always hunky-dory and perfect, because I am no pro or anyone with that much experience at this, but in the end, I still had some gates that looked somewhat decent, and if I didn’t mention any of the imperfections, maybe they might not have ever been noticed in photographs. 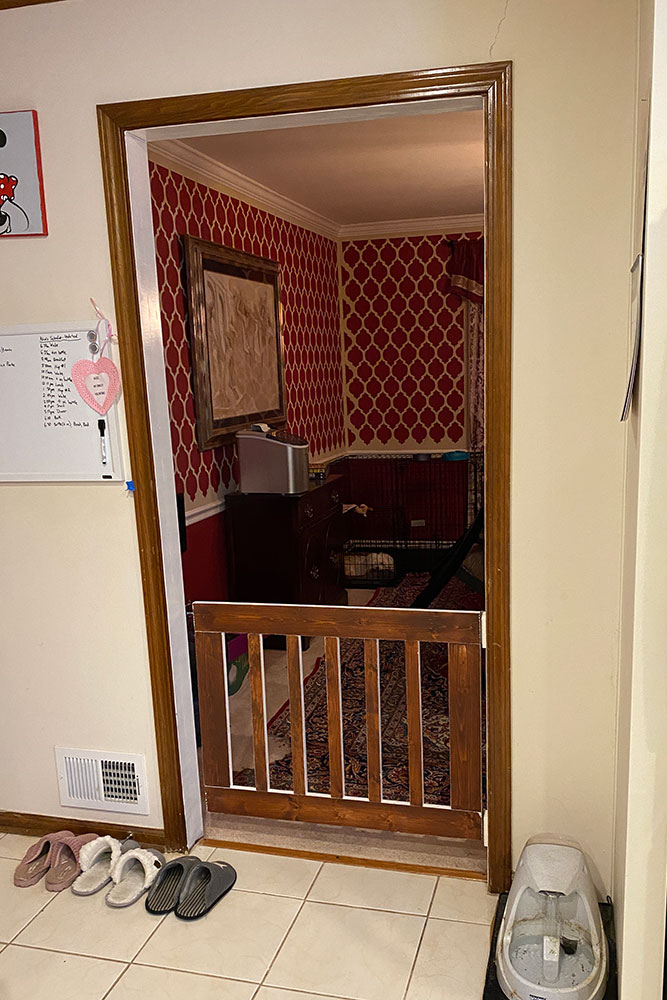 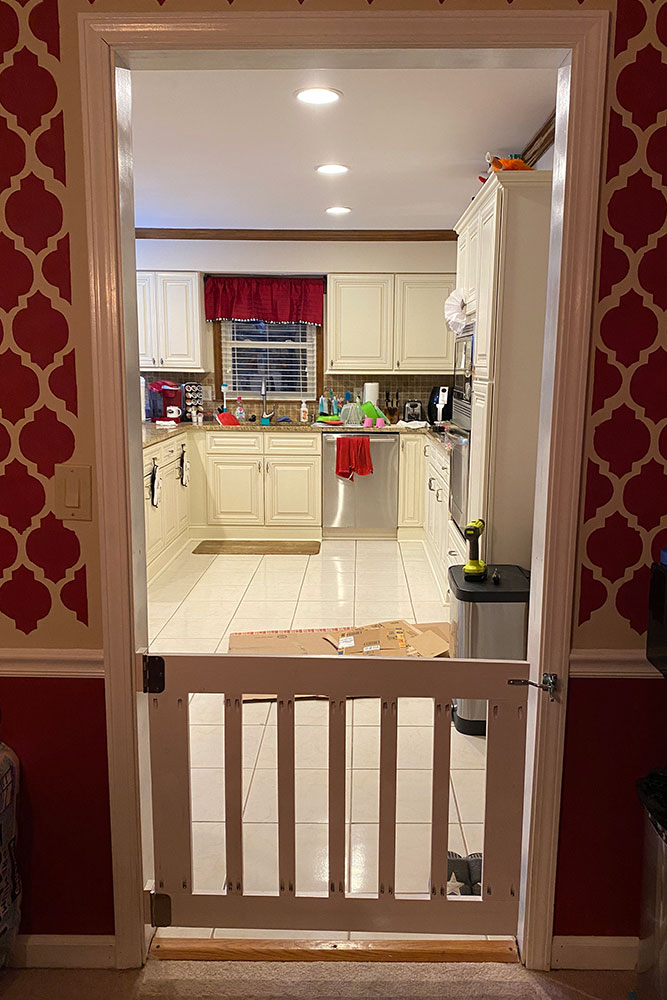 Here’s the gate that separates the kitchen from the dining room.  As you might be able to see, the two-tone finish of it was designed so that it would match the wood trim on the kitchen side, while the white side matches the trim of the dining room.

But because my house is kind of wonky in the sense that over 30 years, there has been some slight warping to some of the door frames in the home, I needed to implement some spacers in the frame to affix the hinges to in order to make sure that the latching matched up on the other side. 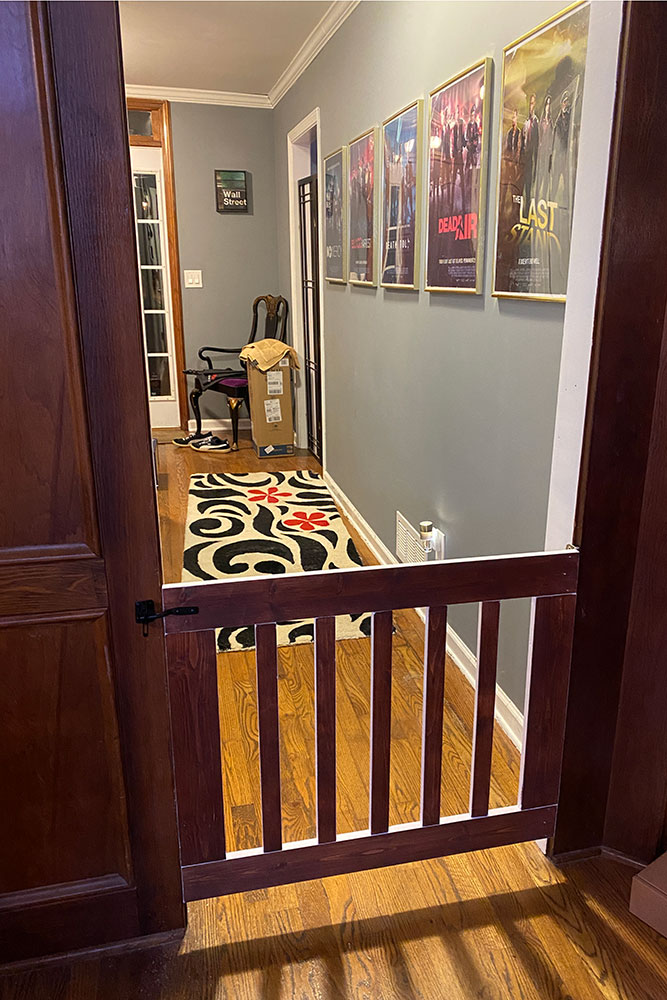 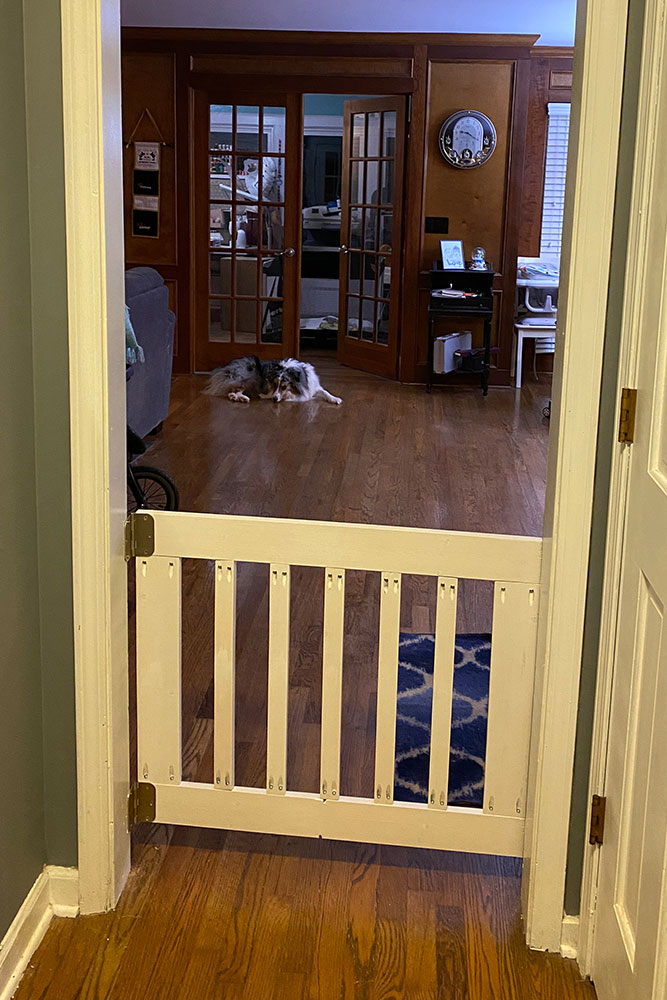 Little details matter, so I made sure that the visible hinges on the white side matched the metal/nickel color and look of the hardware in the hallway, while the latch on the wood side was black to match the power outlets and light switches on top of the wood of the living room. 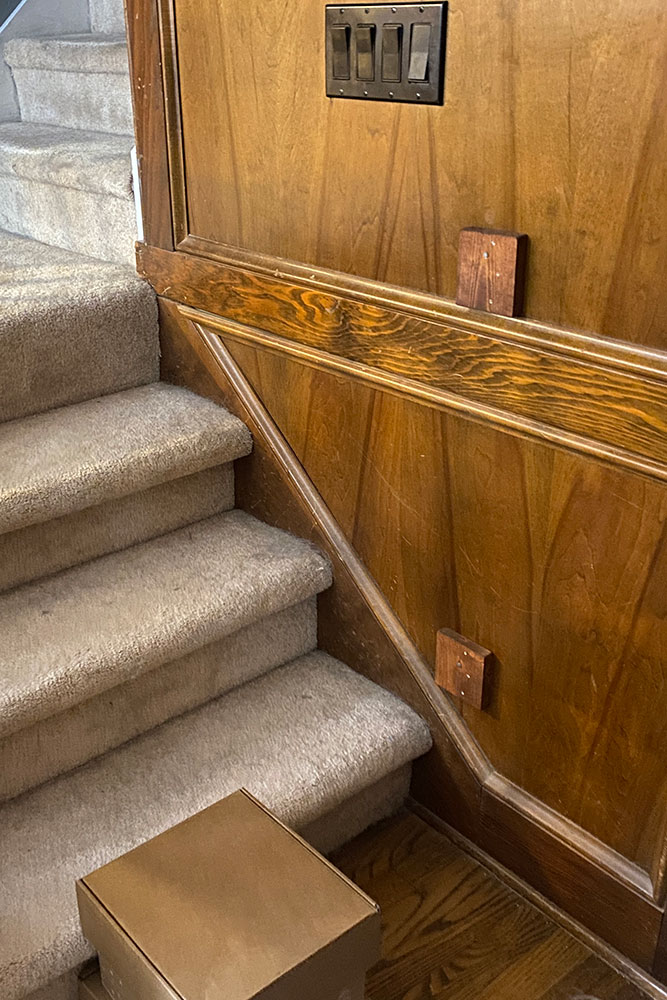 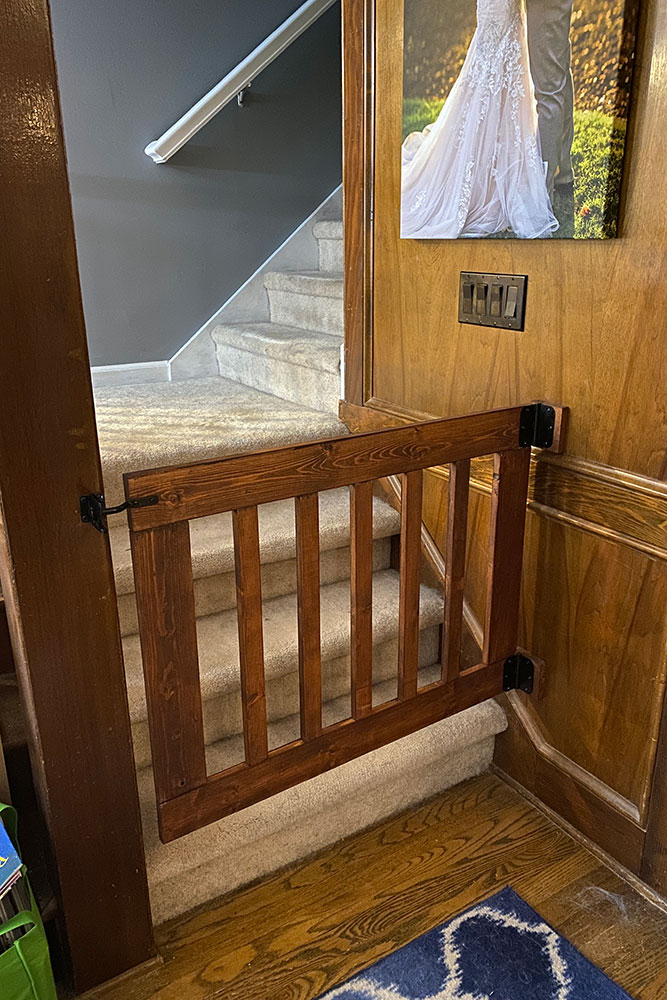 Finally, we have the gate that effectively cordons off the staircase from toddlers, while still being traversable by the cats in the house.  Much like the first gate, this one also required spacers, but not because of any sort of measuring shortcoming, but in order to clear a piece of trim that juts out and would have collided with the gate had there been no spacers installed.

But this was my favorite one to put up, because being stained on both sides made it easy, and it effectively ends the reign of terror my big dog does in the house, sprinting up and down the stairs to chase cats 50 times a day, while barking and being a nuisance.  Granted, this gives the cats more space to embark on their own reign of terror, but at least they’re not barking loudly while my kid(s) may or may not be napping.

And there we have it; three gates, when all was said and done when it came to cost of materials, was basically three gates for a little more than the cost of one baby gates that are popularly purchased.  Sure, there’s the cost of time and labor that I’m not factoring in, having done it myself, but in the end, I’m still getting a customized aesthetic, and the satisfaction of having done something for my home, my kids and my family, by myself.

They look good overall, and as much of a learning curve it was and some struggles during the build, I’m pleased with how they turned out, and most importantly, the function they’re already serving helping to contain and keep my first a little bit safer.