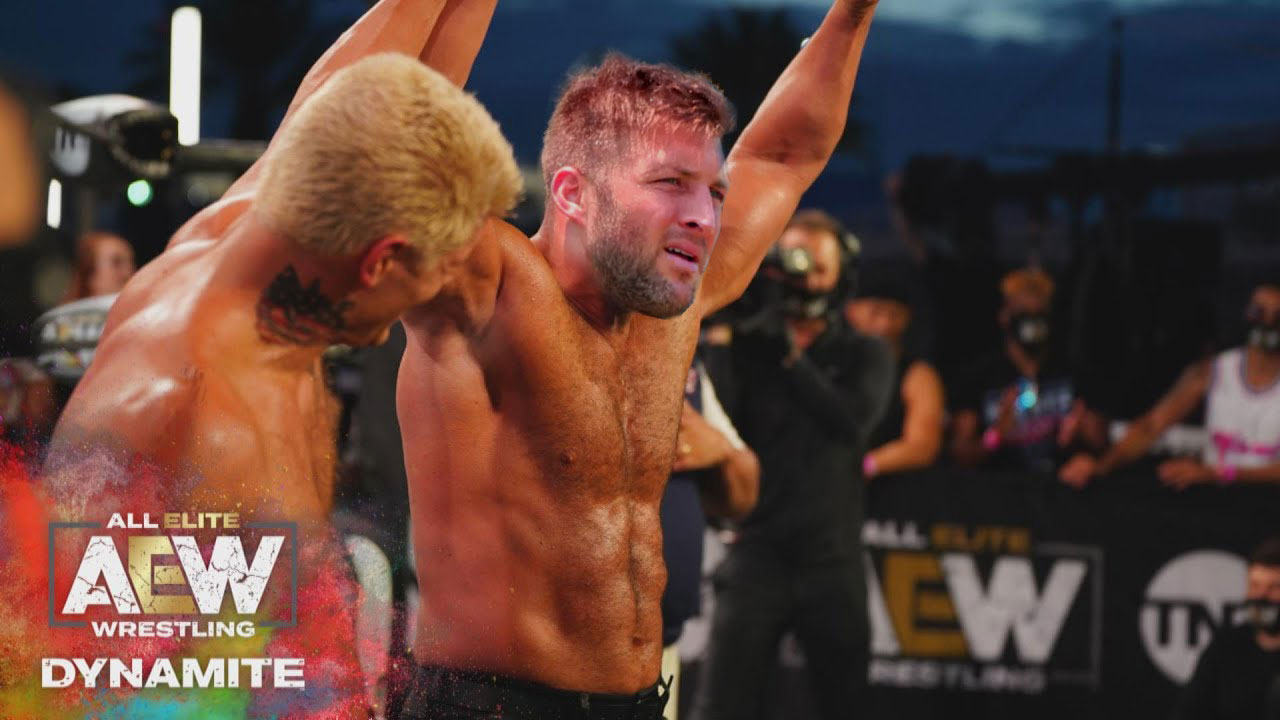 The other day, my bros and I were bullshitting about professional wrestling as is often times the norm, and the thought crossed my mind that AEW is low-key owned by the Jacksonville Jaguars, since owner Tony Khan is the son of the Shahid Khan that owns the Jags.

Recently, I saw some blurb about how despite having signed with the Jaguars, the attempting-to-return-to-football Tim Tebow is no guarantee to make the team, even though he’s still built like a tank and trying to come back as a tight end and not a quarterback, and then the wheels got turning in my brain to do so fantasy booking in the event that Tebow flames out of football again, but instead of trying to pursue professional baseball, chooses professional wrestling instead.  Especially since there’s already a convenient transition from the Jags to AEW, being under the same family umbrella and all.

After about five minutes of bullshit, I realized that this hypothetical bullshit would be better served as brog material and not a passing conversation in private company, because some of these ideas would be fucking gold in an ironic sense if they were to come to fruition, even though there can hardly be fewer things in the world nerdier than fantasy booking professional wrestling.

Anyway, Tim Tebow is cut from the Jags, not for anything performance-related so much as is it that the Jags are an NFL team and NFL teams are more afraid than Gabriel is in The Walking Dead of anything and don’t want Tebow’s faith to ever be mentioned in the same breath as them.  He’s in the locker room, silently crying, cleaning out his personal effects, and our character arc begins with Tim saving a cross that he hung, for last, staring at it wistfully, thinking to himself why the good lord has failed to give him the strength he needed to make it back to the NFL.

Tony Khan enters the locker room, and gives Tebow some fluff about how he performed great, and how his failure to make the team had nothing to do with his talent.  But seeing as how he wasn’t going to make the team, and to not let such physical gifts go to waste, he offers Tebow an opportunity to join All Elite Wrestling, so he could still potentially have a platform to spread the word.

“Professional wrestling?” thinks Tebow.  The fake sport with fake storylines, so much of which is debaucherous, scandalous, and frequently sacrilegious?  Khan assures Tebow that AEW is different than those whom might have put out such unsavory product, and points no further than AEW’s own TNT Champion, Miro, God’s Favorite Wrestler, as proof of AEW’s respect and commitment to Christianity.  Tebow is intrigued, and agrees to a developmental tier-1 deal.

And because Tim Tebow is a physical specimen, he takes to professional wrestling like a fish to water.  He’s a little stiff on agility, but his physique is like a more natural Brian Cage, minus the Bane venom to puff him up like a balloon.

Months later, after a successful title defense against the Butcher, Miro is jumped by the Blade, and probably two other guys previously released by the WWE like the Forgotten Sons, probably going under names like Bandsaw and Blowtorch, and despite being God’s favorite wrestler, four-on-one too much for anyone.  But then, Tim Tebow jumps the rail and hits the ring, and helps Miro regain control of the situation.  The Jacksonville crowd in Daily’s Place is going bonkers because Tebow is a god in Florida, and Schiavone and Excalibur are blathering on about how he’s been doing the lord’s work over on Dark and whatever trainer he’s under, and under the name of the lord, Tim Tebow breaks into AEW as an ally to Miro.

As a wrestler, Tebow is more of a pacifist, and tries to outwrestle his opponents instead of just trying to pummel guys into unconsciousness for knockout pinfalls.  Most of his matches start off with an unusually high amount of collar-and-elbow lockups, armbars, and Tebow trying to maneuver his opponents into pinning predicaments, with a variety of rollups and small packages.  But because this is still professional wrestling, the opponents will eventually tire of this charade and devolve into violence, where Tebow then spends much of the next 5-6 minutes taking some bumps and doing it well because there is nothing that Tim Tebow isn’t good at, selling no exception.

But eventually, the opponents slip up and leave themselves vulnerable to the Tim Tebow trademark Crucifix pin, which is just an ordinary crucifix and not a crucifix bomb, because Tebow is a pacifist and doesn’t want to harm anyone that needs to be harmed.  But because Tebow is so jacked and strong, he’s often times able to keep his opponent’s shoulders down for the three count.

For the early career, Tebow’s greatest feud would be against Luchasaurus, because what better foil for Mr. Religion could there possibly be than someone who is allegedly a dinosaur, the symbolic antithesis of religion?  Bonus points for being someone larger than Tebow and giving a good visual symbolic man vs. monster visual in the program together.  After months of promos about how the other doesn’t exist and is fictitious, the feud culminates at one of those episodes of Dynamite that has a special tagline, but has to be at Daily’s Place where Tebow will have the homecourt advantage.

Much of the match will be dominated by the larger and more experienced Luchasaurus, and Tebow will bump like a champion for 7-8 minutes.  But frustrated at his inability to put Tim Tebow away, Luchasaurus eventually begins to ramp up the violence and brings a table into the ring to try and put Tebow away.  After an Irish whip into the ropes, Tebow reverses a backdrop attempt and puts him in position to attempt the Crucifix; however due to Luchasaurus being larger and stronger, he reverses the attempt into a Samoan drop – through the table.  The crowd at Daily’s Place groans audibly, as the hometown hero is thwarted.

Luchasaurus pantomimes the it’s over arm gesture, and staggers his way over to Tebow’s lifeless body to go for the pin.  However, while wasting time mugging to the crowd, unbeknownst to everyone, two shards of table have conveniently shattered their way into a position slowly forming a cross – underneath Tebow.  As Luchasaurus goes for the cover, referee Aubrey Edwards counts one, two and then Tebow launches him off of his body!

Tim Tebow rises from the wrecked table, and the Omega vs. Moxley deathmatch pyro goes off.  The drone camera above zooms in on the makeshift cross that formed underneath Tebow’s previously prone body, and it becomes abundantly clear where Tebow is getting this second wind from.

Luchasaurus begins striking Tebow, but he’s hulked up by Christ and no-selling the shit out of all the blows.  Desperate, Luchasaurus decks Tebow with a chair shot, which only succeeds in staggering him out of the ring for a moment, where he takes a swig out of a bottle of holy water conveniently hidden under the ring.  As Luchasaurus measures Tebow for his Trouble in Paradise-clone kick, Tebow spits the holy water in Luchasaurus’s face like the Great Muta, Tajiri and more recently, Asuka, staggering him with a surprise Baptismal.

Stunned, Tebow rolls him into the Crucifix, and pins Luchasaurus, one, two, three.

Not only does this notch Tebow the biggest win of his career, it sets up Luchasaurus for a character change, because Luchasaurus and the Jurassic Express is already tired and need of a change.  See, Tebow isn’t just talented in the ring, his presence benefits others too!

Aside from this ingenious booking, there’s still tons of potential to be had with Tim Tebow, professional wrestler.  If AEW plays their cards right, they could basically book him like Bret Hart, in the sense that his religious persona would make him a heel in more liberal blue regions of the country, but he’d be a monster babyface in more red parts of the country, and Jacksonville would be a no-brainer home field where he’d always have the advantage.

And with how many wrestlers are either Christian or born-again Christians, like Sting and the Young Bucks, there’s all sorts of easy means to work programs with those guys.  Hell, Tebow could enter a program with Christian Cage himself, thinking his name had something to do with religion, and there being a mixup that leads to wrestling matches.

As you can read, Tim Tebow as a professional wrestler would be straight money.  I have no doubt that if he ever decided to pursue this as an endeavor, he would be a TNT Champion by the end of his first year, when Miro decides he’s had enough of working for AEW and is ready to go to Japan to built up some equity by fulfilling his destiny by winning the IWGP Championship before coming back to the WWE past his prime to finish out his career, and AEW needs to get the belt off of him before he goes.  Because all he does is win and succeed at everything he puts his mind to.