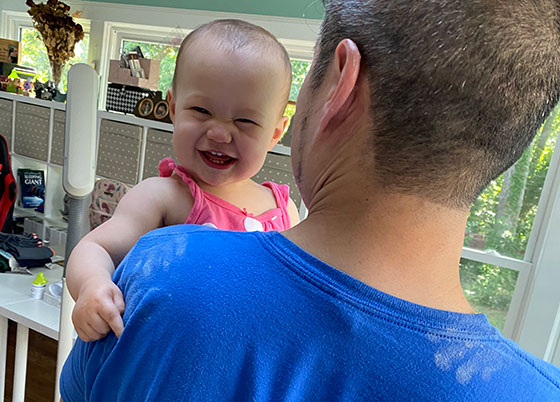 Just the other day, I was having one of those parenting mornings where my child was very cranky and fussy, and nothing I could seemed to be capable of placating her frustration.  There was lots of crying and tantrums, and as mythical wife and I have coined the phrase, I was getting fried.  By the time noon rolled around, my patience was completely eroded and I couldn’t wait to put her down for her afternoon nap.

Once down, mythical wife I were chatting about the particularly challenging morning, but then she said to me that the number of days left of where it’s going to be just the two of us in the morning is ticking down to zero; once #2 gets here, which is literally any day now, then mornings like this, where it’s just #1 and myself together aren’t going to be happening with any frequency, regardless of if it’s she’s being an angel or a hellion.

That realization, hit me like a baseball bat.  She was right.  It really is a bittersweet realization that once again opens up the door of guilt towards my first child, because once #2 gets here, my attention will be divided at times, and I will no longer be capable of giving her the undivided attention that I feel that any child deserves from their parents.  Suddenly, I’m feeling like an asshole for getting fried at having my patience tested by what was probably more than likely the aggravation that comes with teething for her, which is something I should know a great deal of these days, but I still let it get under my skin and burn me out.

Once #2 arrives, not only will things be much more difficult across the board, but there will be plenty of times in which I will have to divert my attention to the much more critically demanding needs of a newborn baby versus the slightly less demanding in comparison to a toddler baby, and then I’m sure I’ll be pining for the simplicity of having to only care for a single child versus bouncing around between two.

The guilt is real, although I know it’s unnecessary since the love I have for one child does not mean it will be stretched out with the arrival of a second.  Everything will work out in the end, but it doesn’t change the fact that I’ve probably been taking my time with #1 for granted on some days like this one, and I know that I need to treasure what little solo time I have left with her before life as I know it changes forever, again.