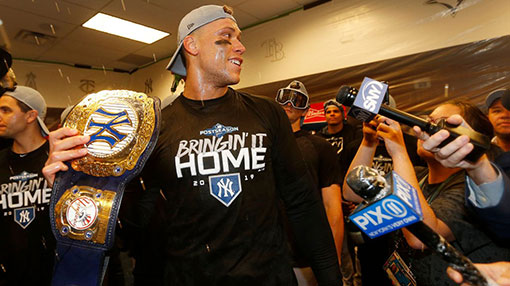 I like baseball.  I like wrestling belts.  You’d think a collaboration between the WWE and MLB to release team-themed replica wrestling belts would be a layup for a guy like me, right?

If you think so, you couldn’t be any more fucking wrong.

An obvious cash-grab for starters, but all I see when I think about the fact that there are going to be 20-30* belts that will be put into production starting in the 2022 season, all I see are 20-30 blets that stand in the way of the WWE getting off their lazy asses and actually making replicas of the only fucking WWE blet I want left, the NXT UK Tag Team Championship.

*why anyone would want a replica belt for teams like the Rays, Rockies, Reds, Marlins or Orioles is completely beyond me, but homers are homers for a reason

For the record, I don’t just hate these MLB-WWE collab belts, I hate every other belt out there that’s not an actual active or historic belt.  I hate all the shitty tribute belts that WWE makes that takes existing plates and slaps them onto some overly-designed shitty straps themed to a hall of famer, and calling it a tribute.  I hate Xavier Woods’ and Tyler Breeze’s shitty YouTube show belts that have come into existence ahead of the only active fucking belt without a replica available.  I hate when they take some shitty stinky brown leather and wrap it around an Attitude-era World championship and call it a Mankind tribute.

But both MLB and the WWE really like money, and it really is low-hanging fruit to make these and watch them sell a justifiable number of them to warrant the decision to produce them.  I can’t hate on the business of it, I just hate that these things are definitely going to stand in the way of what I actually want.

And frankly, given the news over the last months of NXT kind of being rumored to being shifted back into a true developmental territory, who’s to say that any of the NXT and NXT UK blets will even get to be sold for much longer in the future, especially if they’re deactivated and removed from television.

Only hardcore blet-heads like myself may have noticed that for about four days, the WWEShop released the NXT Women’s Tag Team Championship Replicas that’s still listed as available in the Euro store, but was already taken down from the American site, which initially had me curious that they took it down in order to have a brand new blet available at promotional discount, but seeing as how it hasn’t been brought back, it makes me wonder if it’s more the possibility that the blets will be deactivated on television, and therefore not needing replicas to be sold online.

As far as the NXT UK Tag blets, I’m beginning to think that they’ll never even be made in the first place, because perhaps the division as a whole might get folded up, if the talking heads surrounding Vince McMahon in Stamford see them as a risky ROI.

At least I’ll have an Atlanta Barves blet available to me with the cash I’ve been sitting on for literal years, waiting for the one blet I actually wanted.