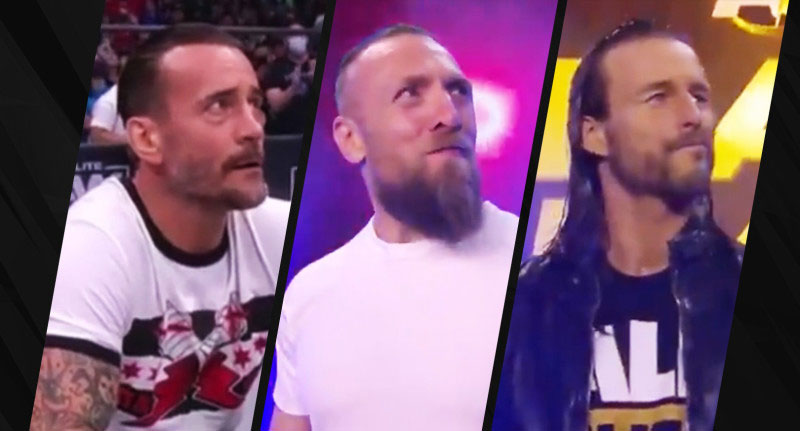 In spite of all the criticizing and clowning I do on AEW, I don’t hate them at all.  Quite the contrary, I support their existence, as an alternative to the WWE that I do more than my fair share of criticizing and clowning on as well.  It’s just that I don’t always understand what AEW is doing, or can’t really seem to grasp the ideas that they may or may not have in mind for the near to distant future.

Sure, CM Punk basically broke the internet on the night he emerged as All Elite, and as big of a fan of the wrestler he was during his time in WWE, he hasn’t wrestled in seven years.  Plus, the world kind of got to know him a little bit better during his time away, and I’m not going to say I full-on soured on the guy, but I am a little more skeptical about his general attitude and outlook on things, seeing as how Twitter was kind of the only thing he utilized to not completely disappear from the public eye, and few things really go well with Twitter.

And then they pair him up with Darby Allin, who is clearly on the hydra of protected AEW originals, along with MJF and Jungle Boy.  Maybe I was just raised on too much Vince-WWF, but his scrawny stature and 1998 persona don’t really do it for me, so the idea of a CM Punk and Darby Allin scrap was about as appealing to me as finding out a friend is a little more right-wing than you might have thought.

But obviously, the main topic of this post is that when the All Out revealed both the debuts of Adam Cole and Daniel Bryan Danielson, in non-wrestling capacities, no less, the first thought that popped in my head was, what the heck is AEW going to do with all this massive influx of talent?

Going back a little further, they were all too willing to pick up Aleister Black when the WWE let him go, and this was after they had plucked Christian out of retirement, not long after bringing Rusev into the fold and renaming him Miro.  Suffice to say, AEW has been more than willing to fill their roster full of a lot of the talent liberated by the WWE, but again, my thoughts wander to wondering what they can do with all this talent, because a promotion can have all the talented creative in the world, but they’re still at the mercy of the clocks of available television time.

So AEW has Dynamite, Rampage and the online-only Dark and Dark: Elevation.  I’m going to go ahead and undercut the importance of Dark and Dark: Elevation, because short of having their own network, it’s ultimately always going to be a harder sell to try and get people to tune into YouTube twice a week much less once.  So for lack of a better term, AEW really has only three prime hours of nationally-televised cable programming in which to try and utilize an increasingly bloating roster.

Most any performer will say, nothing is more valuable than television time.  Because if you have it, the exposure can be parlayed into payment, but if you’re the greatest wrestler in the world but nobody can see you, you’ll starve to death.

With that in mind, AEW has brought in four former world champions, and that’s adding them to a roster currently plagued by kayfabe(?) abuse of power and nepotism, with the EVPs of the company running around with all of the prime time slots.  There can’t possibly be enough time for CM Punk to be in any sort of meaningful feud, while Bryan Danielson is feuding with an Adam Cole that’s secretly trying to usurp power from Kenny Omega.  At some point, these guys will get outsourced to Impact Wrestling, or be used as pawns to work relations with New Japan because the W in AEW stands for Weebs.

Eventually, CM Punk will be main eventing Dark: Elevation against like Sonny Kiss while Adam Cole and Brandon Cutler have a match against Bear Country on Dark.  Either that, or the incumbent AEW roster who was present from the beginning all gets pushed off of the main shows and onto online shows, and the jobbers in the Dark Order will be all over Dark, wrestling against Billy Gunn and his sons every online show.

What I’m really getting at is that I don’t think there’s remotely close to enough television time available for all these big players to possibly get enough screen time to play out storylines in any meaningful or memorable fashions.  Even at the pay-per-views, there will still be a finite amount of time for everyone to get their spots in, especially when most everyone knows that Kenny Omega is going to have a 30-minute broadway.  Either all these marquee talents better get used to the idea that they’ll have to work the occasional Dark/Elevation, or much like old NJPW, get used to having a whole lot of fairly meaningless tag matches.

But as cool and intriguing it is to see all these guys jumping ship to AEW, there really is such a thing as too much talent, especially when egos and aspirations start to come into play, and people start jockeying for just a few more minutes to get another spot or two in.