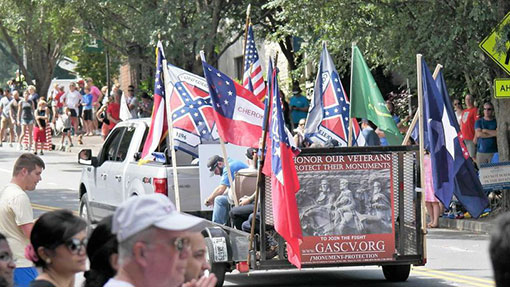 SMH: racists sue city of Alpharetta because they can’t display the Confederate battle flag at a Veterans Day parade, get shot down in court; however, due to the attention, the city opts to cancel the parade outright

My reaction to reading this story was the following line, said in the mocking southern white supremacist impression I’ve found myself doing an awful lot more than I used to since 2016:

if I cain’t be racist at the parade, I don’t want there to be a parade at all.

That’s kind of the takeaway of this whole story.  Supposedly, the parade still happened, whether or not it was sanctioned by the city in the first place, I don’t have the care to dig and find out, but supposedly the Sons of Confederate Veterans did not participate or fly any Confederate battle flags during it.

Either way, Alpharetta is a super white suburb north of Atlanta, and I’m actually more surprised that the courts ruled in favor of outlawing the Confederate battle flag, given their demographics.  But Alpharetta is also pretty flush with new money which tends to lean towards the left, and if there’s one thing we’ve learned throughout history, money speaks louder than racism and political correctness, and by product of it, sometimes the right calls are occasionally made.