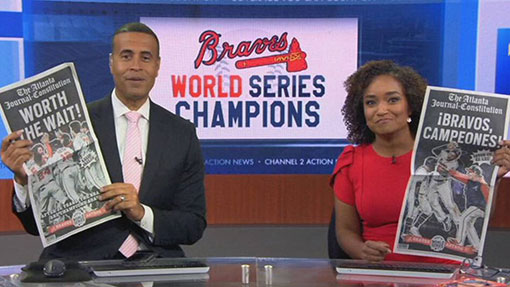 The only thing I wanted to commemorate the Braves’ World Series victory was a copy of the Atlanta Journal-Constitution with some sort of front page cover of the Braves’ victory.  Unsurprising, so does just about every single fucking Braves fan in the Metro Atlanta area, or just people who want a slice of history.

But I guess it’s safe to say that misery loves company and that I am most definitely kept company, given the fact that the AJC printed a paltry 30,000 copies of a commemorative November 3rd edition.  Also unsurprising is that there are thousands of disappointed and upset fans who were unable to get one because there were only 30,000 copies of a fucking newspaper to a metropolitan area that has a population of nearly six million fucking people to which obviously not all of them are going to be Braves fans, but a whole fucking lot more than 30,000 are sure to be.

30,000 copies.  Only distributed at Krogers, Publixes, RaceTracs and QTs.  That probably means each location got like, 20 copies, to which they were obviously all sold out instantaneously by those who were lucky enough to be at the right fucking places at the right fucking time.  And me being handcuffed to a baby for 17 hours of every single day, I can’t even have the chance to even try to get one of these fucking surprisingly Jesus-rare newspaper editions.

Fuck you, AJC.  You’re not Nintendo withholding Switches.  You’re not Sony, artificially suppressing Piss5s.  You’re a fucking regional rag that somehow fucked up getting Willy Wonka’s golden ticket, by pulling this kind of bullshit stunt.  You could have printed 200,000 copies of this fucking paper, and they’d have almost all sold for $3 a pop, netting an absurd amount of revenue for a piece of shit publication that nobody would give two shits about on any other given day, but it just so happened to luck into the regional baseball lottery with the Braves winning a World Series.

Sure, they’re going to reprint a generous 70,000 more copies of it, but the cat is out of the bag now, and people now know the hot ticket these things are, and how many people want them.  And when that happens, if it already hasn’t, we’re going to have motherfuckers buying up multiples to try and flip them for profit, because the world is fucked up, everyone sucks, and I fucking hate everything right now.

I only had one goal, and it was a colossal failure and not for lack of trying.  In spite of my limited opportunities to leave the house, I still tried, failed, because the Publixes and Krogers I tried probably had like five copies.  Sure, there might be maybe 10 copies at each tomorrow, but I’m in the same boat of not going to have any chance to go check, and I probably won’t get them, and I’ll have to settle for the bullshit Friday edition or the Sunday reprint, that I’ll still get with hate and grudge in my soul.

The whole point of this was to get the paper on the fucking day after the World Series ended, and thanks to the AJC being a bunch of fucking fuck faces, dreams of traditionalists and Braves fans like me are all met with the same bullshit fate.

Fuck you, AJC.  I hate you more than COVID-19 right now, and I kind of hope that the Braves never win the World Series again, so that you’ll never have another opportunity to fuck up the golden ticket again.  Better yet, I retract my hopes that the Braves never win again, I hope they do win again, but when they do, the AJC is out of business and replaced by some publication that doesn’t fucking amount to toilet paper for the homeless.