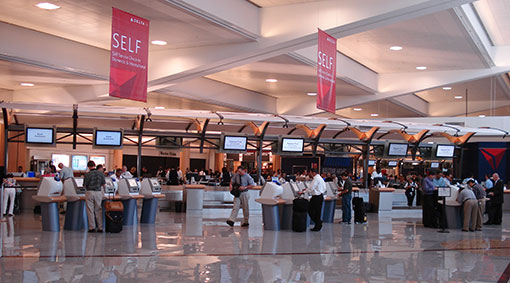 Oversleeping was my fault. A lot of the day’s issues don’t happen if we don’t oversleep, but it’s simply something that can happens when living a life as exhausting and draining as ours of raising two under two can be.  But it’s how the rest of the day transpired that has left me feeling few emotions aside from disappointment, regret, and the polar opposite of what Thanksgiving is supposed to be all about.

The irony is that even if we don’t oversleep, there’s no guarantee that we would’ve made it to the airport on time.  Airlines appear to have tightened up two hours in advance rules to where they don’t even check people in for flights once within 105 minutes.  Long appears to be gone the days of when I could roll in with 75 minutes to go, no checked bag, TSA precheck and be ready to board group 1.  But with kids, all the kids’ stuff, and checked bags, that creates a tremendous amount more room for complications.

Ironically, regardless of if we left at our originally intended time, there’s little chance we would’ve made it on time anyway, because Atlanta airport’s parking is basically the worst lot in the galaxy, and it took us probably 30 minutes to find a place to park, and we would’ve missed the check in window anyway.

At this point, I’m kind of ready to punt; our original plan was to get us there as efficiently as possible, and pivoting with kids and checked bags never seems like a good idea to me, but mythical wife seemed more determined to see my family than I was, so after a 47 minute phone call with the airline, $465 basically paying for a full fare, we’re rebooked for a later flight to a different airport that gets us in four hours later, which slashes my already short trip and I’m wondering if it’s even worth it.

Calling my mom to give an update is met with more disappointment and aggravation at the change of plans instead of any modicum of empathy or understanding. After my mom asks if we can uber to dinner after the money and effort to make sure the girls had car seats waiting for them, I’m already having regrets for not punting and heading into this trip with more dread than any sort of anticipation or excitement, that my family is finally getting to meet my kids for the very first time.

I’m thankful for my family and health and that my girls have finally gotten to meet my family.  But it was honestly for just three hours that felt as short as it was, and instead of the more quality time I had hoped to introduce the girls to my dad earlier in the way, it was barely a half hour at the end of the day, before retiring to my mom’s place; where I had to sleep on the floor because her guest bed is a single person day bed, and mythical wife gets it over me.

We also had to be up at 5:30 so we could have adequate time to repack and load kids and make it to Reagan National in ample time as to not let the bullshit 105 minute advance rule fuck us again, but that didn’t stop #2 from waking up every two minutes and needing pacifier, resulting in me getting all but like an hour of sleep.

And then on the plane ride back, my kids saved all their crazy for the return trip, where #2 was that kid on the flight, screamed a few times and was undoubtedly the fussiest kid on the plane, and #1, pooped.  I hoped I could dodge it, but nope; first time changing a poopy diaper in an airplane bathroom.

So, in the end, Thanksgiving dinner was a nice time, for as little time as it was.  I was very happy to see and be around my family and to have everyone meet the girls for the first time.  But it was a colossal shitshow everywhere else, encapsulated by a missed flight, massive sunk costs of replacement flights, parking and other expenses, having no time, sleeping on the floor and having it end in the blink of an eye the next morning, so all factors considered, I have to say it was a pretty lousy Thanksgiving.

Everything is fucking difficult now, and I just wonder when it is that things won’t be as much, hopefully if at all.