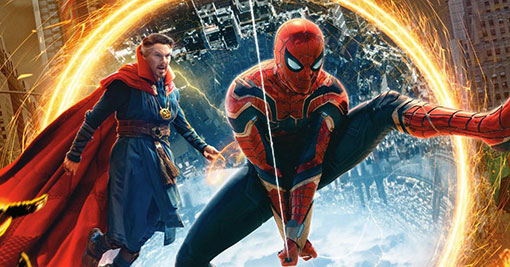 It goes without saying that there are going to be spoilers galore here.  Short of saying it was a fun movie and I enjoyed it a lot, it’s going to be difficult to really talk about the film without there being any spoilers.

So, it was a fun movie, and I did enjoy it a lot.  This was the first film that I saw in a movie theater in over two years, and I couldn’t have picked a better film to go out and feel like a human being, albeit masked one, for an evening again.

What No Way Home accomplishes is aside from merging all of the prior Spider-Man films together into a singular film, they’ve gone ahead and basically opened all the fucking doors into all other Marvel mediums.

We all know that Spider-Man is an anomaly of a property that is owned by Sony, who will absolutely not relinquish the rights to, so Marvel Studios has to settle for what I’m guessing is a tense working relationship, where their MCU properties can cross over with Spider-Man and vice versa, which was on full display, with Doctor Strange having a significant part of the film.

As the groundwork was laid down by Doctor Strange and even Loki, the existence of alternate universes was acknowledged, and I was entertained and impressed with the way Tobey Maguire and Andrew Garfield were able to reprise their own Spider-Man roles, as well as all of their respective villains to be the adversaries of the film.

And good on William DeFoe’s Green Goblin to basically be the last boss of not just another Spider-Man film, but an entire different universe’s Spider-Man film.  It just sucks that the main victim of his MCU rampage was hot Aunt May, which unfortunate because Marisa Tomei has aged like a fine wine, and was always a snack throughout her tenure as Aunt May.

And then in the mid- and post-credits scenes, we’re treated to Doctor Strange straight up flexing into the post-WandaVision Wanda which also ties everything to the Disney+ series as if Hawkeye didn’t already establish the relationship in the first place, but then the biggest head scratcher was the cameo of Tom Hardy’s Venom, to which it looks like there’s going to be an attempt at some point to have Spider-Man meet Venom, to which it would sound logical, if not for the fact that FOX had created their Venom property to have like, no relationship with Spider-Man in the first place.  But for what it’s worth, the MCU has reached an olive branch into the gross FOX waters, and it looks like Venom is the first batter up.  Hopefully he is the only batter up, because technically, Morbius is a Spider-Man villain, and I’d rather not see Jared Leto make his way into the MCU in any capacity.

But there we have it.  No Way Home has basically kicked down all of the doors and has pulled the strings of all sorts of other universes into the MCU, and it’ll be very interesting in coming years, to see what comes from this sudden influx of crossovers, when we’ve been denied them for literal decades up to this point.