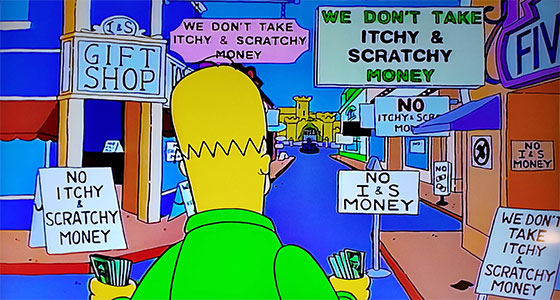 It’s been a while since I bust out this series but I also haven’t really been keeping my eye out for ridiculous Atlanta and/or Georgia-centric stories to criticize.  I’m sure they’ve been happening in all the time that I haven’t been looking, but for whatever reason, theFacebook’s algorithm decided to show me this news story, and I’m beginning to get very freaked out at just how well it appears to know me and seems to post shit in my newsfeed that feels like it’s reading my mind sometimes.

But long story short, a community just outside of the Metro Atlanta area which is why this gets an Oh, Georgia and not an Oh, Atlanta headline, Stonecrest, has decided that they’re going to print their own currency for some reason.

The loosest justification that comes close to being a viable reason, being that it will help keep the money of Stonecrest inside of Stonecrest, which kind of sounds to me that they’re concerned the people of Stonecrest are absconding with their money to nearby Conyers or Decatur.

Somewhere within this, there’s kind of an arrogance in the act of it, that the people of Stonecrest seem to believe that those outside of Stonecrest actually give a shit about Stonecrest to where they feel the need to have their own currency as not to have their wealth poached and taken away from their community.

For the record, Stonecrest is like, this remote patch of boonies that sits just outside of the eastern city limits of Decatur, which kind of marks the end of Metro Atlanta on the east end, and where people tend to panic at wondering if they’ve lost their opportunity to gas up, or grab some fast food, before they hit the long stretch of I-20 eastbound where there’s a whole lot of nothing until they get to Augusta.  Conyers, is really that last bastion of civilization before going full Autobahn eastbound, but Stonecrest sits in between Conyers and Decatur.

My two knee-jerk reaction is that one, who the fuck even uses cash anymore?  I literally, never use cash, at all.  The cafeteria at my old job was the last place I regularly used cash, and since I stopped going into the office, my last real reason for carrying any cash at all dried up, and I genuinely do not use cash period, so that I can put everything on my Amex or Visa card to get SkyMiles or cash back.

Stonecrest might have their own currency, but if there are civilized people who have abandoned cash, and don’t like the germy touch points and spread of currency, who the fuck is actually going to use it?  There are all sorts of politically incorrect assertions and assumptions that go with this, but I’m going to let this dog remain sleeping.

Second, my initial thought is that even after it’s printed, it’s going to end up like that episode of Simpsons where the family goes to Itchy & Scratchy Land, and Homer gets suckered into purchasing a ton of Itchy & Scratchy Bucks, only to immediately discover that all the shops in the park don’t take it.  I bet the few mom ‘n pop shops of Stonecrest might accept whatever funny money they end up printing, but when it comes to anything that’s a chain, like the local Bojangles, AMC theater, Kroger or Publix, I can imagine some proud resident placing some goofy looking Monopoly money on the counter during a transaction, and then promptly getting security called on them for attempted use of counterfeit money.

The real question is, if this money actually comes to fruition, how long does it actually last before they realize it was a waste of real money, and they abandon the whole idea outright?  I say by 2013, Stonecrest’s Itchy & Scratchy money is already a thing of the past.