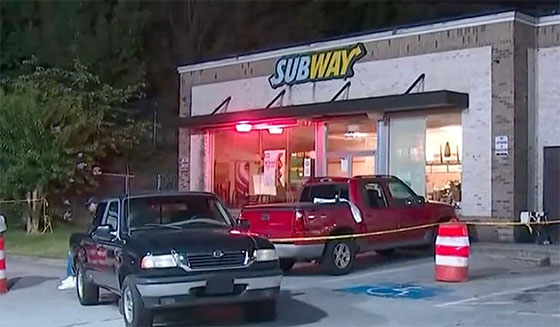 It’s been a while since I’ve done one of these but obviously, it’s the same old song and dance that I just don’t have the time.  Honestly I feel like if I ever wanted to do one of these every day, I’m sure I could find a story absurd enough to warrant a post.  But there are days like today where the story came to me for a change of pace, and upon seeing it, I knew it was inevitable that I had to write about it:

Deadly shooting occurs at a Subway; over too much mayonnaise being put on a sandwich.  I really can’t make this shit up, even if I tried.  But to expound on the unfortunate situation, basically a Subway employee put too much mayo on a customer’s sandwich, they became irate, and then words began being exchanged, and the next thing you know, they’re opening fire into the restaurant and killing the employee.  The manager on duty promptly returns fire because of course they’re packing too, and the whole thing ends with the shooter arrested, an employee dead, with the employee’s sister who also worked there, also shot and in critical condition.

Also, the 5-year old kid of one of the women struck was there and watched their mom get shot.

Typically, these kinds of posts are dripping in sarcasm and are more of a you’ve got to be kidding me in an ironically judgmental funny way, and I’ll be honest that this is how I felt when I started writing about it.  But honestly, it’s nothing really funny about it is as much as it’s just fucked up and sad that there are people out there that genuinely felt that the best course of action to resolve the dissatisfaction at getting too much mayo on their fucking Subway sandwich is to pull out a gun and start shooting like Yosemite Sam.

I know this particular Subway, and where it is, and it is very much not in a particularly good part of town.  It’s riding a line where everything east of it is touched by the magic gentrification fairy, and are in a period of where there are people hoping to cash in on rising property values and get paid, but on the west side of the thoroughfare is basically still the Jurassic Park of ghettos.  So it’s not really any surprise that this kind of incident happened at this part of town, but it’s still tragic and fucked up that there’s literally a person dead over mayonnaise on a sandwich.

Guess all that’s really left for me to say is that I’m sure glad I don’t work or really have any business being in the city proper anymore, because I’d sure hate to get in the crossfire of any sort of altercation over shitty fast food.