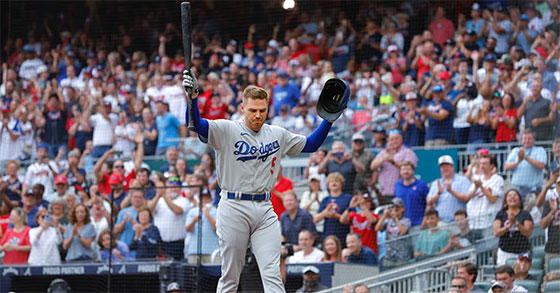 Man, despite the fact that it’s pretty well known that Freddie Freeman is about the most likeable human being to ever play the game of Major League Baseball, I wouldn’t ever have imagined him being the center of one of the more dramatic baseball storylines to have occurred in, well, this generation, so to say.

To quickly summarize, as quickly as a wordy blabbermouth like myself can do: 2021 was the last season of Freddie Freeman’s contract with the Atlanta Braves.  Inexplicably, the Braves win the World Series, everyone is on cloud nine, Freeman is all but expected to re-sign with the team.  Over the winter, baseball actually goes into a labor-centric lockout, where teams are prohibited  from negotiating contracts with players.  Lockout ends, everyone maintains that Freeman is guaranteed to re-sign with the Braves.  Somewhere along the path, negotiations don’t seem to materialize and suddenly news breaks that the Braves have made a trade for Matt Olson, the all-star first baseman from the Oakland A’s, effectively dropping the mic and saying that they are moving on from Freddie Freeman, sending shockwaves throughout Braves Country™.

It was reported that Freddie Freeman and the Braves were unable to come to terms of a deal, citing that Freeman wanted a six-year deal, but the Braves were only willing to offer a five.  It wasn’t long afterward that the Los Angeles Dodgers would sign Freeman for six years, and in terms of business, the saga was complete.

However, in the media, the saga continued as after all the involved teams started buttoning up their rosters, words would emerge from the Braves’ camp, and Freddie Freeman himself, and a very sad and almost tangible sense of hurt feelings from both parties would continue on.  The Braves blathering on about how they’re a business and that no one person is above the team, Freeman insinuating that he felt slighted that the Braves didn’t pursue him hard enough, and all over the place, be it other baseball peers, fans, legends, everyone’s taking sides on who they backed in this surprisingly public beef between the Braves and the former face of the team.

Regardless, the dust would settle fairly quickly because Freddie Freeman is better than everyone else and allowed it to resolve and said all the right things, because he’s just such a good fucking human being, and the 2022 season would begin with the Braves embarking on a life post-Freddie, and Freddie suiting up for the goddamn Dodgers of all other teams out there.

Needless to say, the weekend of June 24th was earmarked heavily by the Braves and their marketing department, because it would mark the one and only visit of the Dodgers to Atlanta on the season, and the first-ever visit of Freddie Freeman as an opponent.  As the date drew nearer, I heard that the team was resorting to standing-room tickets because the demand was so high.  And as the team had been doing all through the year, which is something that I thought was pretty cool, was doing individualized ring ceremonies for any contributors from the 2021 squad who had moved on to other teams.

So the weekend came and went, with the Dodgers taking the series 2-1, in three fairly heavily contested games.  As expected, Freddie Freeman’s return was an emotional event for pretty much everyone, as he was given a hero’s welcome and all the respect in the world, numerous standing ovations and cheers no matter that he was a Dodger.  Freeman cried at least 57 times throughout the weekend, basically every time he was behind a microphone while he was presented his World Series ring, and any time he had a moment with a former teammate.

It’s clear that there was and always will be a tremendous amount of mutual love between the Braves and the city of Atlanta and Freddie Freeman, and the games themselves were kind of an afterthought compared to the giant lovefest of Freeman’s return.

But then just a day later, news broke that seemingly out of nowhere, Freddie Freeman had fired his agent, Casey Close of Excel Sports Management.  The timing of it happening right after the visit to Atlanta raised eyebrows everywhere and next thing we know, the book of the Freddie Freeman saga is being reopened.

It turns out back in the springtime, Close didn’t tell Freeman what the Braves’ last offer was.  Most everyone knew that the Braves were being staunch about the five years instead of six, duration-wise, but what wasn’t disclosed to Freeman, was that the Braves were willing to match the Dodgers on an annual value basis, just for one less year.  So the Dodgers ended up getting Freeman for six years and $162 million, so if the math is correct, the Braves were offering five and $135, both deals offering $27M per year.

The narrative being reported is that Close deliberately didn’t inform Freeman about how willing the Braves were to negotiate, with the belief being Close knew Freddie would have chosen the Braves in spite of the year, which would have cost him a pretty chunk of change in commission.  What was known, was that Close did come at the Braves with a fairly aggressive and ultimatum tactic, which was believed to be the reason why the Braves pursued a plan B, because they were basically not given adequate time to play the negotiation game.

Regardless of all this juicy new information about the saga, it still can’t change the past and alter the course of the present.  Freeman is still a Dodger, and the Braves still no longer have him, no matter how much perceived regret there still appears to be between parties.

The sad thing about it all is that, in the end, nobody really wins.  Freddie Freeman, despite his heart still having strings attached to Atlanta, plays for the Dodgers and there are no take-backs when it comes to contracts.  The Dodgers have seen very clearly, they have signed a guy whose heart is most definitely 100% aboard with the team, and some players have already stated that they already feel second fiddle to the Braves, and hope that Freeman will come around on them.  The Braves, ironically, as much as I love to shit on them for being corporate tools, kind of come out the least scathed from the whole saga, but they still lose too, because they still no longer have Freddie Freeman.

Already, there’s been all sorts of fantasy GMing and roster-crafting based on all this new information, and naturally there are lots of people fantasizing about the teams doing a trade that would send Freeman back to the Braves and have a reunion that would make Jon Snow and Sansa Stark’s reunion seem lame.  Honestly, there are way worse trade proposals than a straight Freeman for Olson trade, but then that sucks for Olson, who is an Atlanta native, that no matter how good he plays (which he is playing very well), he’ll never shake the reputation of being the guy that had to follow Freeman.

But ultimately, it all boils down to the fact that what’s done is done, and no amount of new information or drama stories changes the fact that Freddie Freeman is no longer on the Braves, and that conclusion, will never not be sad. 😔