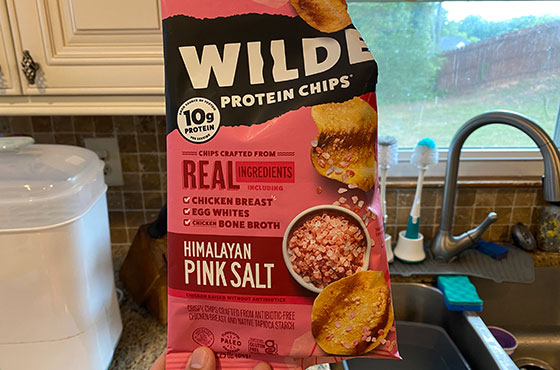 I saw this bag of effectively, chicken chips at Sprouts, and I had to stop and examine the bag.  10 grams of protein from chips?  Servings per bag, two?  So I could effectively get 20g’s of protein by crushing this bag of chips made from chickens?

But then I was like mehhhhhhh because I had no idea what to expect from a taste and consistency standpoint of chips made out of chickens.

But then I had to pass by the display again on the way to the register and they were 2/$7 and next thing I knew, I had bought two bags.  The other one is chili lime.

Honestly, they’re not that bad.  Crunchy like a potato chip, and frankly they taste kind of like Pringles.  And I get 20g’s of protein, which is always important to people who exercise and lift weights.

Really though, what I really thought about, and what served as the impetus for this post, was the sheer thought that a chicken, a living, bleeding bird, was somehow reduced to becoming, a chip.  Not a potato, not corn, not some other vegetable.  A chicken.

And then I got to thinking about what humans would feel like if we were ever overtaken by a more intelligent species that also was higher on the food chain than we were, and decided to one day reduce humans as a food source to not just any food, but chips.  Like I imagine a person getting one of those cheese slicers taken to them to carve out thin, malleable slices of their flesh, and they’re deep fried to become chips for creatures who eat people want to eat.

Fucked up to think about sure, but this is what my mind wandered off to while I was indulging in chips made out of chicken.  Better them than us, I suppose.