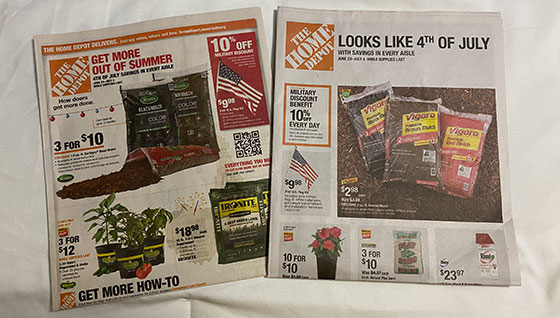 Now I understand that there’s little sexy and glamorous about newsprint, especially considering the world has such a collective boner about digital-this, omnichannel-that, social, influencers and other forms of marketing approaches that constant insists that the print medium is dying or already dead, but I will fight you if you tell me this to my face.

What good is your digital medium if the internet goes down?  Or you can’t connect to the wi-fi and your 5G can’t make it through the concrete and medal coliseums of the stores you’re in, needing to access the internet?  Or you catch me on a bad day and I slap your phone out of your hand and break your phone for telling me that my occupation is obsolete?  Alright then

I’ll be the first to admit that the 2021 ad isn’t necessarily mind-blowing, or remotely close to the best work that my team has ever produced.  We were still amidst pandemic-this and supply chain-that, not to mention that my team was forced to work in a program that was the equivalent of a Chevy Cavalier trying to compete with NASCARs on the track.  But compared to the ad on the right?  Suddenly the 2021 Cavalier looks like a spaceship compared to the stone and chisel produced ad in 2022.

In short, my old team was completely gutted, laid off and the company’s newsprint was outsourced to an agency in Austin, Texas; literally a week after I had my final day with the company.  I was pretty upset about it despite having dodged a massive bullet, because I still had and have a tremendous amount of care and shits to give about all the people on my old team, because there’s a ton of talent and good people there who were put into a horrible situation.

Fortunately, almost all of them have landed on their feet since, but the point remains that the old newsprint team was effectively killed, with our primary task being outsourced; in my opinion, one of the biggest professional insults to anyone who’s ever taken pride in what they do for a living.

I blame my old boss for all of this.  I’ve made no secret of the disdain, contempt and general hate I have for her, and how they were easily the #1 factor for why I decided to leave the company.  I could list of numerous things I hated about being under their thumb, but I’d be better off saving those 50,000 words for November and completing NaNoWriMo with them instead.  However, of all of the horrible shit she said, did and behaved to me that made her a horrible Bronn of a boss, I genuinely think this is the worst thing she ever did; as the title of this post says, I think this takes the cake.

This piece of outsourced shit,  the July 4th ad for 2022, is a goddamn joke.  The photo does no justice to how poor the entire ad is, because all throughout the circular are errors, alignment and consistency issues, bad crops, obviously distorted images, and zero quality control.  A hundred things I caught in a hundred seconds of scanning through it, that would never have made it past mine or any of my team’s eyes on our numerous proofing rounds.  Ancient Egyptians pounding hieroglyphics on reeds had better brand standards than this sad circular.

She killed our medium.  No matter how hard my team pushed back against evolving trends and proved our positive ROI year after year, she came in and killed us, because no team in the world can survive in the league when their own coach is deliberately and determined to kill them.

She never cared about newsprint.  Never once, not for a single day since the day she arrived.  She came in with a catalog background, and had a massive erection for the catalog team for this company.  Immediately adopted it as her passion project and probably figured she could evolve the ROI of the company’s seasonal catalogues from her stalwart leadership and experience from a dying department store company.  However, she was required to oversee the newsprint team as well, as her title was a senior manager of print, so in order for her to have her baby, she had to also take on our team as well.

In spite of her minimal effort and care for my team, newsprint did just fine at first.  We were such a self-sufficient and well-oiled machine that we didn’t need her at all.  In fact, our team went several months without her position even being filled, and nobody had any idea that there was even a vacancy at all.

However, due to the lack of respect for my team and our needs, plus our own leadership that gave no fucks about us, a time had come when some critical software that we used, had a license lapse, with there having been no backup plan in place, FOR MONTHS.  Long story short, my team went from being a well-oiled machine of processes and production, to basically being Tony Stark imprisoned in a cave full of loose parts and rudimentary tools and being told to create an Iron Man suit.

But we did it anyway.  It was one of my proudest successes with the company, coming up with and implementing a workflow that managed to utilize our Windows 95-made software and still produce adequate and on-brand newsprint for several years.

However, as I said, no team can expect to survive when their leadership is trying to tank them.  And instead of risking repeating myself, I’ll just conclude that she finally succeeded.  The pandemic, supply chain, inflation, whatever, all were convenient excuses that  just helped fan the flames that burned my old team to the ground, and with absolutely nobody fighting on behalf of the team, it was only a matter of time before they eventually succumbed.

All the bullshit she said to me, did to me, and made my professional life a living hell, I endured and soldered through until I had a logical and beneficial escape plan.  That just made her a Bronn.  But the fact that she played corporation and effectively killed the medium that I’ve built a career on and served as the livelihood for my entire old team, that truly makes her worthy of genuine hate, and if it really had to be boiled down to the bottom line, this is the #1 thing that I hate her for.