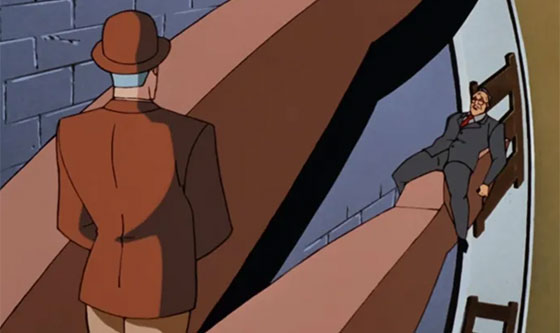 A long time ago, I posed the question if The Clock King really was a villain, in the grand spectrum of things.  That he really was just a punctual and time-considerate individual in a world full of shitheads that don’t have such qualities, and he’s the one that gets painted to look like the bad guy, and eventually a member of Batman’s rogues gallery.  Back then, it didn’t really seem fair to me that he was considered a villain and I wanted to open that discussion to my then-six readers.

Obviously this goes into the obvious notion that there is no greater force in existence than the passage of time, and how it’s unfeeling, unbiased, impervious by nobody, and never ending.  Which means those who wields it to greatest effect, like The Clock King, are basically the worst people ever.

At this current juncture of my life, there’s seldom any time in which I am not up against a clock on a fairly regular basis, and there are times in which it becomes absolutely maddening and fills me with despair and levels of stress that I have a hard time coping with.  By individual nature, I am a punctual person who believes in punctuality and adequate lead time; I hate to rush, I like getting to my destinations early, and as a worker I believe that 15 minutes early is on time and on time is late.

But since I’ve gotten older and had kids, my agenda is always packed full of things for other people, I’m routinely stretched past capacity, and I’m way more prone to being late to things, and I concern myself that I’m developing a reputation of being flaky and unreliable.  Or just a typical parent maybe.  Regardless, it goes against everything that I’ve always put a lot of conscionable effort into maintaining, and I have a hard time dealing with the seemingly endless stress that comes with being up against the clock.

A large part of my stress and anxieties over the last weekend were simply being up against a parade of clocks.  Have to get #1 to dance class on time.  With only a 45 minute class, there’s no time for me to drive home in 12 minutes, be late for a 60 minute call, and then drive back 12 minutes to pick her up, so I take the call while at the dance studio and pray that I’m not called on to speak which I’m fortunate that it didn’t really happen.  Then I need to take #1 to camp, late, but it’s all good because they knew she’d be late.

Go home for 5 minutes so that I can check my work email and feel guilty for putting my job in the backseat , and then I have to then drive 30 minutes into the city for a stupid team-building event that I know that I can only stay for 45 minutes before I have to leave in order to go pick up my kid from camp.  Get #1, get her home and into nap, while I check my work email for another 5 minutes, before I have to start rushing to pack shit for the trip, knowing that I have only like an hour to pack a ton of shit before we need to get out the door before Atlanta traffic eviscerates us and puts us in a position of being too close to check our bags and risk missing our flight.

Get out the door, late, of course, and then there’s a ton of traffic anyway because Atlanta sucks.  Oh shit, there’s a call I need to be on, so I dial in, and unfortunately this time I’m called upon several times, to which I’m only on the phone and not at the computer I really should be at, so I have to feel like an asshole and explain that I’m not at my computer and look like a flake, while I’m trying not to lose my shit sitting in bumper to bumper traffic while we’re ticking closer and closer to being too late to check bags and miss our flight.

Arrive at the airport and it’s a shit storm of people, and logistics don’t apply there, but my wife lies to a traffic rent-a-cop in order to get him to move cones and allow us to actually drop shit off and I’m trying not to blow my lid.  On accident, I find a fairly good and really convenient parking spot that allows me use of the sky bridge to circumvent a lot of the ATL airport traffic bullshit and I’m in the airport, and thank the heavens I’m able to check my bag, which turned out to be the best event of the day.

But by now, we’re cutting it extremely close by the time we get through security, and when we get to our gate, they’re already boarding, so we have no time to send #1 to the bathroom in advance, or pick up any food for any of us.  The flight is shit, but at least by this point, the day’s clock races have all stopped for the most part, and it’s just an unpleasant evening at my dad’s place instead.

After the party the pressure is off a little bit, but by the time the evening is around, I have to pick up mythical wife from Maryland 60 miles away, and there’s a clock over my head in knowing that by the time she’s situated and I’m back at my mom’s place, I’ll have maybe at most, three hours to sleep before I need to wake up in order to get back to the airport.

The following morning has its own battles with time as our flight is at 7 am, and we need to really be at the airport by 5 am in order to make sure our bags are checked within 90+ minutes of the flight, but we miss that deadline too but are fortunate that everyone at the airline doesn’t feel like power tripping and allows for it.

Finally we get home and for at least a little bit, the clocks are off, except for the fact that mythical wife’s first day of school begins the next day, and it’s never a good idea for me to stay up too late on a school night.  By then, the weekend is all but completely lost, and somewhere in the aether, The Clock King is laughing maniacally at just how much hell he put me and my family through for a weekend and just how much jobbing I did dealing the stress and anxiety.

And that’s just one instance of The Clock King whooping my ass.  One of countless times at this point, and the obvious reality is that he’s doing this to tons of people, concurrently, over and over again, all across the world.

I don’t have a lot of want for things these days, frankly I rarely ever have.  But the next time anyone asks me what I want, I really just want to say that I just want to have a day, where there are absolutely zero clocks to concern myself about.  I’d like to sleep in until my body doesn’t want to sleep in.  Whenever I wake up, I would like to have a good cup of coffee and a hearty breakfast.  No rushing, no schedules, no real engagements that require me to be somewhere at a specific time.  I’d like to eat lunch and dinner when I’m ready to each lunch and dinner, and probably just watch a whole lot of fucking tv all day, because my list of things I’d like to watch is growing to a ridiculous amount, and it really would require more than just a single day to get through it all.

But the likelihood of that really happening is pretty slim, because if The Clock King can outsmart and evade fucking Batman as often as he does, the rest of the world, real or fictional, is pretty much screwed.  That’s true power and true evil, right there.