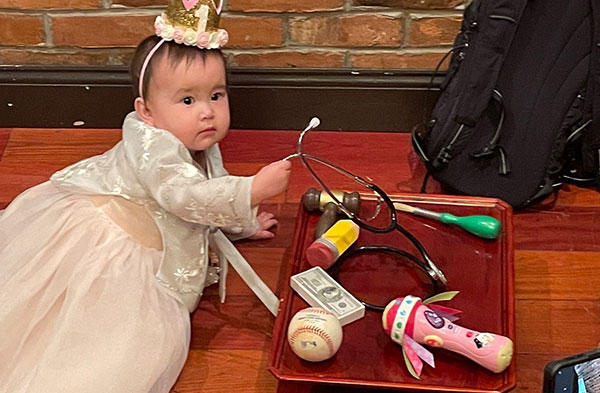 As is often the case with life with two kids as young as my own, things seldom go according to plan. And as much as I loathe tardiness and inability to be on time, things happening behind their intended time has become more and more of a routine occurrence that I hope one day rectifies itself as/if life ever calms down to a less frantic pace.

That being said, with no disrespect for my second child, #2’s birthday has come and gone now, for a few weeks now, but finally I’m taking the time to really reflect on the monumental  occasion.

To be fair, some of this delay had to do with the fact that unlike with #1, #2 got to have a traditional big Korean first birthday party, as the travels I described in prior posts was so that my side of the family could celebrate the first birthday, as is a big tradition in Korean culture.  And that particular weekend was the best chance at getting as much of my family members present, even if it meant celebrating a little bit past the actual date.

But my little #2 is officially one year old, and it most certainly has been an eventful twelve months since her arrival into the world.  I’d be full of shit if I didn’t talk about just how difficult it had been at times, especially considering her challenges she’s had with sleep in general, that still rears up every now and then even to this day.  And when she gives us hell about going to sleep, I fantasize about when she’ll one day be a groggy teenage girl who wants nothing more than to sleep, and I’ll be the obnoxiously awake dad who will gleefully remind her of her infant days when she fought like war to not sleep on a daily basis.

Raising two under two was definitely not an easy task, but as was the case the first time around, things do begin to ease up when good routines are established and reinforced daily, and fortunately #2 has begun to show signs of responding to a schedule.

Obviously, no two kids are the same and despite both being my offspring, the girls are alike in some ways but definitely different in others.  From eating habits, hair texture, food preferences to behavioral temperaments, I learned really early on that comparing them was never valid or a good thing to ever do between them.

As the world itself began to change a little, with the ever-present coronavirus always lurking about, as vaccines rolled out and became a thing, not just #2, but our entire family as a whole kind of got to experience more as a collective famiry and not spend 95% of the first year quarantining at home.

Over the last year, both my kids have been to Disney World multiple times, which probably felt like a pipe dream back in 2020, and have ridden on airplanes three times.  We’ve gone on road trips and seen family members, and it’s like we’ve played a little catch-up with #1 as well, as she’s getting to see an expanded world too.

Like her sister, #2 was picked by Carter’s for photography, but unlike #1, she kept her composure during fittings and test shoots, and ascended to being formally cast by the company for an advertising photo shoot.  We’ve already seen her show up on Target’s website, and more recently, she’s been popping up in Targets nationwide, as a literal poster child for their Just One You sub-brand.

Obviously mythical wife and I are very proud and ecstatic of her success, and she’s finally earning her keep around here, having brought in an actual check.

Right now she’s crawling like a speed demon and reaches the phase where she’s pulling up on everything, with the obvious goal to eventually get upright and in a few months time, she’ll probably be walking.  Mythical wife made the foreboding remark about how by Christmas, we’ll likely have two girls who will be walking (running) around the house, much to my abject horror.

In terms of the all-important baby luckTM, #2 definitely delivered, with the Braves winning the World Series, Georgia winning the National championship in men’s football, and even Virginia Tech inexplicably winning the ACC in men’s hoops

Now as happy as all those victories made me, it’s hard to compare it to the baby luck my first child had at helping deliver a new president, but if the baby luck train could hang in there a little bit longer, the state of Georgia could most definitely use a new fucking governor in November’s elections.

But most importantly, #2 has fulfilled the general famiry ambition mythical wife and I had imagined. Two kids were always on the table and we were just going to see how life panned out; maybe it happened a little sooner than we might’ve expected, but at the same time, we reached our goal before I got any more old and decrepit, and I’m just glad that I’m still physically competent and capable of being the hands-on dad that I always wanted to be.

Over the last year, I may have bitched and cursed and been generally overwhelmed and miserable at times. Complained about sleep deprivation, rigors of doing, anything with two kids.  I don’t deny the frustration when things get hairy, and I know the next wave of personal bitching is probably around the corner.  But none of it changes the fact that I love #2, and #1 with my entire heart and until the day I die, and In the grand spectrum of things, that’s all that really matters.

I don’t deny that this past weekend with its challenges with travel and the constant pressure of being on a clock was extremely stressful for a lot of the time.  But when we got to the restaurant (late, of course) for #2’s birthday party, it was everything that I was hoping for; surrounded by family and friends we haven’t seen in forever, good food, exercising traditions, my daughter picking a doctor as her future occupation, and a whole lot of good times.  It was impossible to remove the smile from my face the whole time.

And that’s just it, no matter the stressful times and anxiousness of parenting, the positives of parenthood still overwhelmingly dominate the negatives when it really matters.  I love my kids and my famiry, and now that we’re complete, it’s fairly easy to know what is always going to drive me.

Happy birthday, my beloved second daughter. It’s an honor to be your dad, and I hope I can show you I love you every single day of your life, forever until the end of time.